When you open a record for editing, the Metadata Editor locks it to prevent other users from making simultaneous edits. Other users that open the record will see a locked message and be unable to edit. As a courtesy to others you should release the record once you finish working on it so others can edit (the default lock timeout is one hour).

Opened bibliographic records are autosaved by Alma in the left pane in the section MARC21 Bibliographic.

Opened holding records are autosaved by Alma in the left pane in the section MARC21 Holdings. 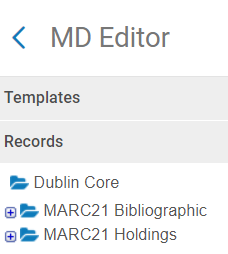 To release one or more of your locked bibliographic records: