Resources for the Study of the Bosnian/Croatian/Serbian Languages: Serbian History

1918 - Kingdom of Serbs, Croats and Slovenes formed after World War I.

1929 - Kingdom of Serbs, Croats and Slovenes renamed Kingdom of Yugoslavia.

1945 - Together with Slovenia, Macedonia, Croatia, Bosnia and Montenegro, Serbia becomes one of republics in new Socialist Federal Republic of Yugoslavia under Josip Broz Tito.

1991 - Slovenia, Macedonia, Croatia and Bosnia break away from Yugoslavia.

2001 April - Milosevic arrested in Belgrade and charged with misuse of state funds and abuse of office.

2002 February - Trial of Slobodan Milosevic on charges of genocide and war crimes begins in The Hague.

2002 Yugoslav, Montenegrin and Serbian leaders sign EU mediated accord to set up new Union of Serbia and Montenegro in place of Yugoslavia.

2006  Nato admits Serbia to its Partnership for Peace pre-membership programme, despite having earlier expressed reservations over the failure to apprehend war crime suspects such as Radovan Karadzic and Ratko Mladic.

2007 21 January - First parliamentary election since the break-up of the union with Montenegro in June 2006. Ultra-nationalist Radical Party makes gains but fails to win enough seats to form a government.

2007 Talks on the future status of Kosovo end in stalemate, with the province's ethnic Albanian leadership vowing to unilaterally declare independence. Serbia says it will resist independence moves.

2008  Mirko Cvetkovic sworn in as new prime minister. Leads coalition government bringing together the pro-EU Democratic Party and the nationalist Socialist Party. Former Bosnian Serb leader Radovan Karadzic, who evaded capture on war crimes charges for almost 13 years, is arrested by Serbian security forces in Belgrade and flown to The Hague to stand trial. European Union mission takes over the policing of Kosovo from the United Nations. Russia and Serbia finalise a controversial energy deal that will hand Moscow control of Serbia's oil distribution network, in return for building a gas pipeline that will take Russian gas through Serbia to southern European markets. 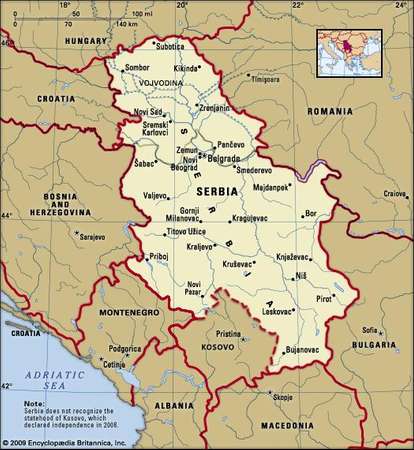 The Europa World Plus entry for Serbia provides a strong introductory overview to the history of the country throughout the twentieth century.

Additionally, this Encyclopedia Article provides a thorough history of Serbia, dating back to the Iron Age. The references informing this article are helpfully documented.

History of the Serbian Language

A language of Serbia