Many Serbians fled northwards to Hungary after a failed revolt against Turkish rule in 1690. The Serbian population of Vojvodina, then in southern Hungary, dates from this migration. Vojvodina was incorporated in Yugoslavia in 1918. Under the Austrian Empire there were important communities of Serbo—Croat speakers in Vienna and Budapest.

Today, émigré Serbo—Croat speakers are numerous. There are at least 250,000 in the United States. Some Muslim speakers of Serbo—Croat have escaped religious persecution by fleeing to Turkey: as many as 100,000 had done so by 1980, and others have followed since the recent warfare in Bosnia.

The names of Serbo-Croat

‘The term “Serbo—Croatian’', including names of both groups, has a very recent origin. In Serbo—Croatian the language is, or has been, called by the following names: srpskohrvatski and hrvatskosrpski “Serbo—Croatian, Croato—Serbian”, srpski ili hrvatski and hrvatski ili srpski “Serbian or Croatian, Croatian or Serbian”, srpski “Serbian”, hrvatski “Croatian”, ilirski “ll—lyrian”, and occasionally even naš jezik or naški “our language’’. In the 18th century, regional terms like slavonski “Slavonian” were also common. These terms have been used with a number of meanings and connotations. Their exact significance depends as much on the writer's dialect as on the period involved. One of the striking features of the Kniževni dogovor “Literary Accord” of 1850, which established the principle of a unified literary language for the Serbs and Croats, is its failure to name the language. One wonders if this omission was deliberate or simply an oversight on the part of the signers.'

Literary Slovene is based on the Lower Carniola (Dolenjsko) dialect with some features from Gorenjsko, which includes Ljubljana, to the north. The Slovene—speaking districts of Carinthia (Korosko) in Austria have dialect features linking them to Slovak and an archaic stress pattern.

Serbo—Croat dialects are customarily classified by the word used for ‘what’: što, kaj or ča. Štokavian covers all of Serbia, Montenegro and Bosnia and parts of Croatia. All the dialects are mutually intelligible, though the Čakavian of the northern Adriatic coast and islands is difficult for others because of its accentuation, which is more like that of Slovene and Russian. A division into sub—dialects is made according to a typical vowel or diphthong developing from earlier Slavonic ь In most of Serbia the sub—dialect is Ekavian while in Croatia, Bosnia and Montenegro Ijekavian is most widespread. 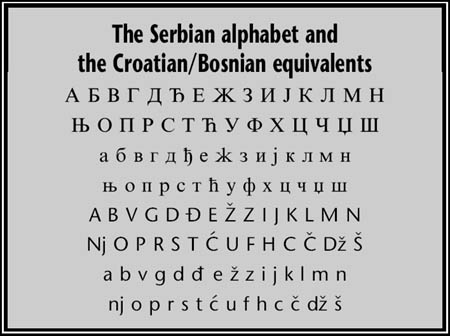 Languages of the Region

It is clear that these three languages, Bosnian, Croatian and Serbian,  have a close relationship.  The article below from the  Dictionary of Languages provides an excellent overview on the languages of the region and their long history. Serbia, Croatia, Bosnia, and Montenegro boast over 18,500,000 speakers.

These are the current names for one of the South SLAVONIC LANGUAGES, best known as Serbo—Croat, the majority language of the former Federal Republic of Yugoslavia.

Illyrian dialects (possibly related to modern Albanian) had been spoken in the western Balkans at the time of the Roman conquest, and had gradually been supplanted by Latin. Romans called the region Illyria and Dalmatia (both names have occasionally been used for Serbo—Croat). Slavonic speakers probably settled here in the 6th and 7th centuries ad.

The division between Croatians and Serbians is in origin a religious one. After conversion to Christianity, in the 9th century, both groups used the old Slavonic liturgy. The Croatians, gradually aligning themselves to Rome, retained the Glagolitic alphabet of the earliest Slavonic texts — and eventually adopted Latin script for everyday use. The Serbians maintained their links with Constantinople, and Serbia became one of the main centres of literacy in Old Slavonic in the widely used Cyrillic script. A third religious element entered the scene when, after the Turkish conquest of Serbia and Bosnia, Islam gradually spread in the cities and towns of Bosnia, and there the language was sometimes written in Arabic script.

Croatia remained largely outside the Turkish Empire: here the languages of power until the end of the 19th century were the German of Austria and the Italian of Venice, the latter particularly along the Adriatic coast. Montenegro (Crnagora, the ‘Black Mountain’) maintained an obscure independence.

In spite of political and religious divides and in spite of the different scripts, the language spoken over this whole region was relatively uniform. Until the 18th century the languages of literature, education and government were very varied — German, Hungarian, Italian, Latin, Old Slavonic, Slavenoserbian (a mixture of Russian Church Slavonic and Serbian), Turkish. There had been some writing in the local language, mostly in Croatia, with varying spellings.

Vuk Karadžić (1787–1864), a Serbian who lived for most of his life in Vienna, was inspired by Bosnian—Serbian folk poetry to spread the use of the popular language. He received support from Jernej Kopitar, the Slovene linguistic reformer. Vuk's collections of songs, beginning 1814, his grammar of 1814 and his dictionary of 1818 began the process of formulating a new Serbian national language. It was firmly based on a Hercegovinan dialect: Vuk had family links with the region, and much of the greatest folk poetry came from there. This choice did not please all Serbs — but it happened to place the new Serbian language very close to the dialects of Croatia, and by the Literary Accord of 1850 it was accepted as the literary language of Croatia too, replacing the local standards in which some Croatian literature had already been written.

Serbia and Montenegro continued to use the Cyrillic script. Croatia used Latin: so did Bosnia as the Arabic script fell out of use. Spelling reforms promulgated by Vuk and others made Latin and Cyrillic easily interchangeable.

In 1918, with the formation of Yugoslavia, for the first time nearly all the speakers of Serbo—Croat were under the same government. Their continuing cultural differences were marked by the division into Croatia, Bosnia, Serbia and Montenegro when Yugoslavia became a Federal Republic in 1945 — and were disastrously highlighted when it collapsed into warring states at the end of the 1980s.

The two standards, Croatian and Serbian, have now been joined and will grow further apart. They already differed in some features. Serbian has tended to borrow international terms from other languages, while Croatian has tended to invent words, often ‘calques’: Serbian biblioteka, Croatian knjižica ‘library’. Besides this, Serbian is richer in Turkish and Greek loans while there are more numerous Latin and German words in Croatian.