From the Fats Waller entry at the Grove Encyclopedia of Music and Musicians (Oxford Music Online):

His father Edward Waller, a Baptist lay preacher, conducted open air religious services in Harlem, at which as a child Fats Waller played the reed organ. He played the piano at his public school and at the age of 15 became organist at the Lincoln Theatre on 135th Street. His father hoped that Waller would follow a religious calling rather than a career in jazz, but after the death of his mother, Adeline Waller, in 1920 he moved in with the family of the fellow African American pianist Russell Brooks. Through Brooks, Waller met James P. Johnson, under whose tutelage he developed as a pianist, and through whose influence he came to make piano rolls, starting in 1922 with Got to cool my doggies now (QRS).

In October 1922 Waller made his recording début as a soloist for Okeh with Muscle Shoals Blues and Birmingham Blues and the same year began a series of recordings as an accompanist for several blues singers. A collaboration with Clarence Williams in 1923 led to the publication of Waller’s Wild Cat Blues, which Williams recorded with his Blue Five, including Sidney Bechet (July 1923). Another composition, Squeeze me, was published the same year, and these began to establish Waller’s reputation as a composer of material performed and recorded by other artists. 1923 also saw his broadcasting début for a local station in Newark, followed by regular appearances on WHN, New York. Waller continued to broadcast as a singer and soloist throughout his life, including, from 1932 to 1934, ‘Fats Waller’s Rhythm Club’ and ‘Moon River’ (on which he played the organ). During the early 1920s he continued as organist at the Lincoln and Lafayette theatres, New York.

In 1927 Waller recorded his own composition Whiteman Stomp with Fletcher Henderson’s orchestra (Col.); Henderson also made use of further pieces by Waller, including I'm crazy ’bout my baby and Stealin’ Apples. Waller also worked as a composer with the lyricists Edgar Dowell, J.C. Johnson, Andy Razaf and Spencer Williams. With Razaf he worked on much of the music for the all-black Broadway musical Keep Shufflin’ (1928). Their later collaborations for the stage included the show Connie’s Hot Chocolates (which opened in May 1929 and incorporated the songs Black and Blue and Ain’t Misbehavin’) and the revue Load of Coal (which included Honeysuckle Rose). Waller’s Carnegie Hall début was on 27 April 1928, when he was the piano soloist in a version of James P. Johnson’s rhapsody Yamekraw for piano and orchestra.

Waller began his recording association with Victor in 1926. Although he recorded with various groups, including Fats Waller’s Buddies (1929, one of the earliest interracial groups to record), his most important contribution was a series of solo recordings of his own Harlem stride piano compositions: Handful of Keys, Smashing Thirds, Numb Fumblin’ and Valentine Stomp. After sessions with Jack Teagarden (1931) and Billy Banks’s Rhythmakers (1932), he began in May 1934 the voluminous series of recordings with a small band known as Fats Waller and his Rhythm.

In the mid-1930s Waller worked on the West Coast with Les Hite’s band at Frank Sebastian’s New Cotton Club. He also appeared in two films while in Hollywood in 1935: Hooray for Love! and King of Burlesque. For tours and recordings Waller often led his own big band. The group’s version of I got rhythm includes a ‘cutting contest’ of alternating piano solos by Waller and Hank Duncan (1935, HMV).

In 1938 Waller undertook a European tour and recorded in London with his Continental Rhythm as well as making solo pipe-organ recordings for HMV. His second European tour the following year was terminated by the outbreak of war, but while in Britain he recorded (also for HMV) his London Suite, an extended series of six related pieces for solo piano: ‘Piccadilly’, ‘Chelsea’, ‘Soho’, ‘Bond Street’, ‘Limehouse’ and ‘Whitechapel’. It is Waller’s longest composition and represents something of his aspirations to be a serious composer rather than just the author of a string of hit songs.

The last few years of Waller’s life involved frequent recordings and extensive tours of the USA. In early 1943 he returned to Hollywood to make the film Stormy Weather with Lena Horne and Bill Robinson, in which he led an all-star band which included Benny Carter and Zutty Singleton. He undertook an exceptionally heavy touring load in that year, as well as collaborating with the lyricist George Marion for the stage show Early to Bed. The touring, constant abuse of his system through overeating and overdrinking and the nervous strain of many years of legal trouble over alimony payments all took their toll and his health began to break down. He was taken ill during a return visit to the West Coast as solo pianist at the Zanzibar Room, Hollywood, and died of pneumonia while travelling back to New York by train with his manager, Ed Kirkeby.

Waller’s greatest importance lies in his several contributions to jazz piano. His original stride pieces in the Johnson tradition, including Handful of Keys, Smashing Thirds, Numb Fumblin’, Valentine Stomp, Viper’s Drag, Alligator Crawl and Clothes Line Ballet (all Vic.), clearly illustrate his imaginative and broadly expressive style. The fullness and variety of his tone are still unsurpassed, and he used a wide dynamic range to great expressive and dramatic effect. Harmonically, he sometimes added inner pitches to the customary octaves or 10ths in the left hand, producing richly voiced three-note chords; his chromatic alterations and passing notes undoubtedly influenced Art Tatum. His improvised melodies were perhaps even more tuneful and less formulaic than those of his mentor Johnson, though in this he was not as consistently inventive as Earl Hines. Waller’s use of rhythm was in the classic stride tradition, and its characteristics included occasional three-beat cross-rhythms in the left hand. All of these features were present in his playing by 1929, as is made clear by My feelin’s are hurt (ex.1), which was recorded in that year. With his group Fats Waller and his Rhythm he produced many musically rewarding sessions for Victor during the 1930s. Performances such as Swingin’ them Jingle Bells (1936) reveal a remarkably tight ensemble and memorable solos by his sidemen.

Waller was the first significant jazz organist. During the mid-1930s he was one of the first musicians to employ the celesta in jazz and frequently played the instrument in combination with the piano.

Waller’s successful popular songs Ain’t Misbehavin’ and Honeysuckle Rose are typical of a long series of such works that were responsible for his fame as a satirical entertainer and songwriter and brought him a following rivalling that of Louis Armstrong. Because of this the serious side of his musical personality was little appreciated during his lifetime and remained largely underdeveloped. As a singer he could give creditable jazz renditions of songs which he considered to have real musical merit. His vocal style, clearly in the tradition established by Armstrong, showed a tasteful and highly personal use of vibrato. On his own novelty songs, such as Your feet’s too big (1939, B♭), his use of comic effects and spoken or shouted asides showed at times a genuine sense of comedy; more often, however, he used his wit to draw subtle but unmistakable attention to the vapidity of the material he was expected to record. Unfortunately, Waller’s public often demanded more of his exaggerated stage personality than of his unique creative gifts.

Pictures from the Fats Waller Exhibit 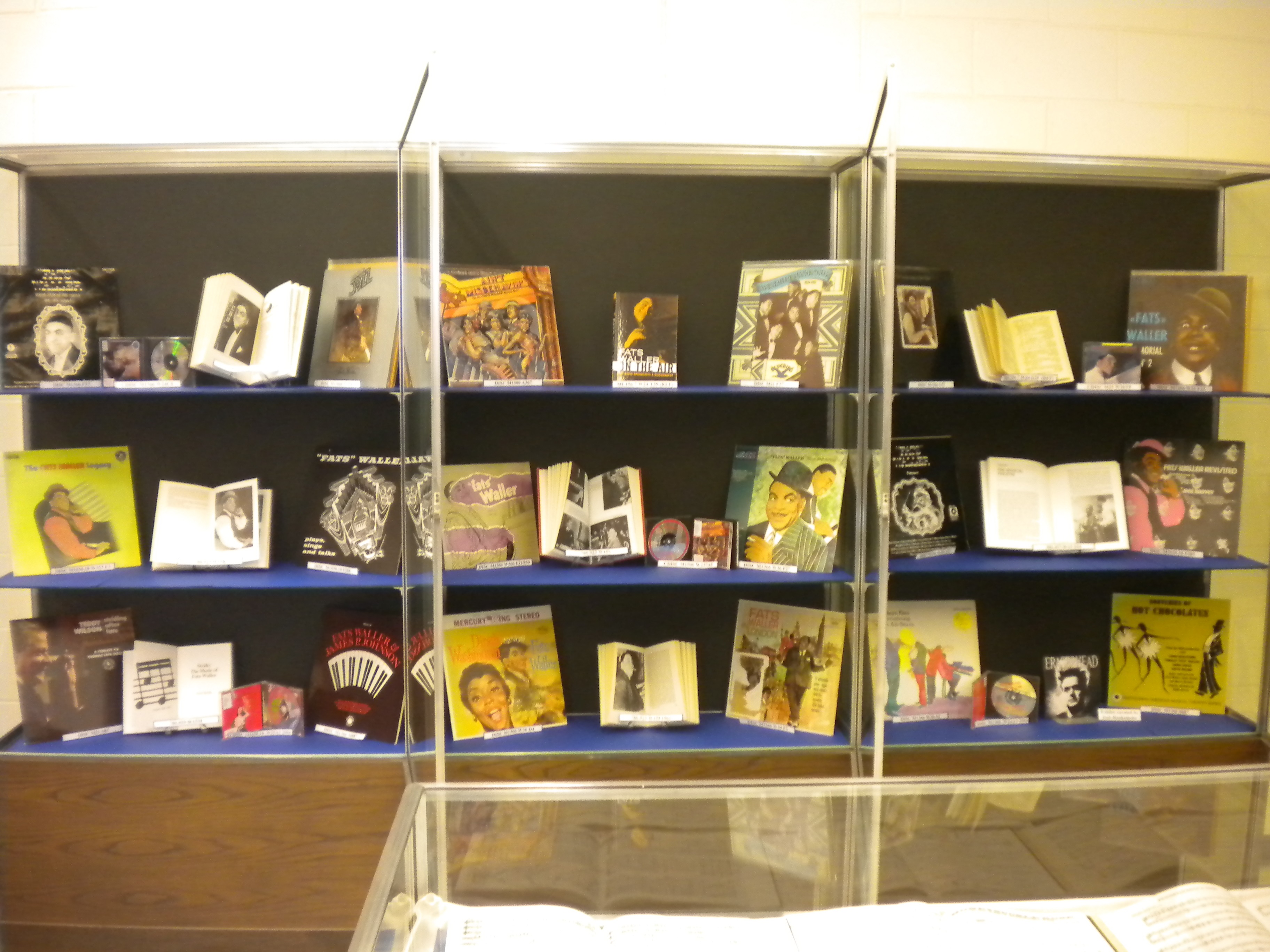 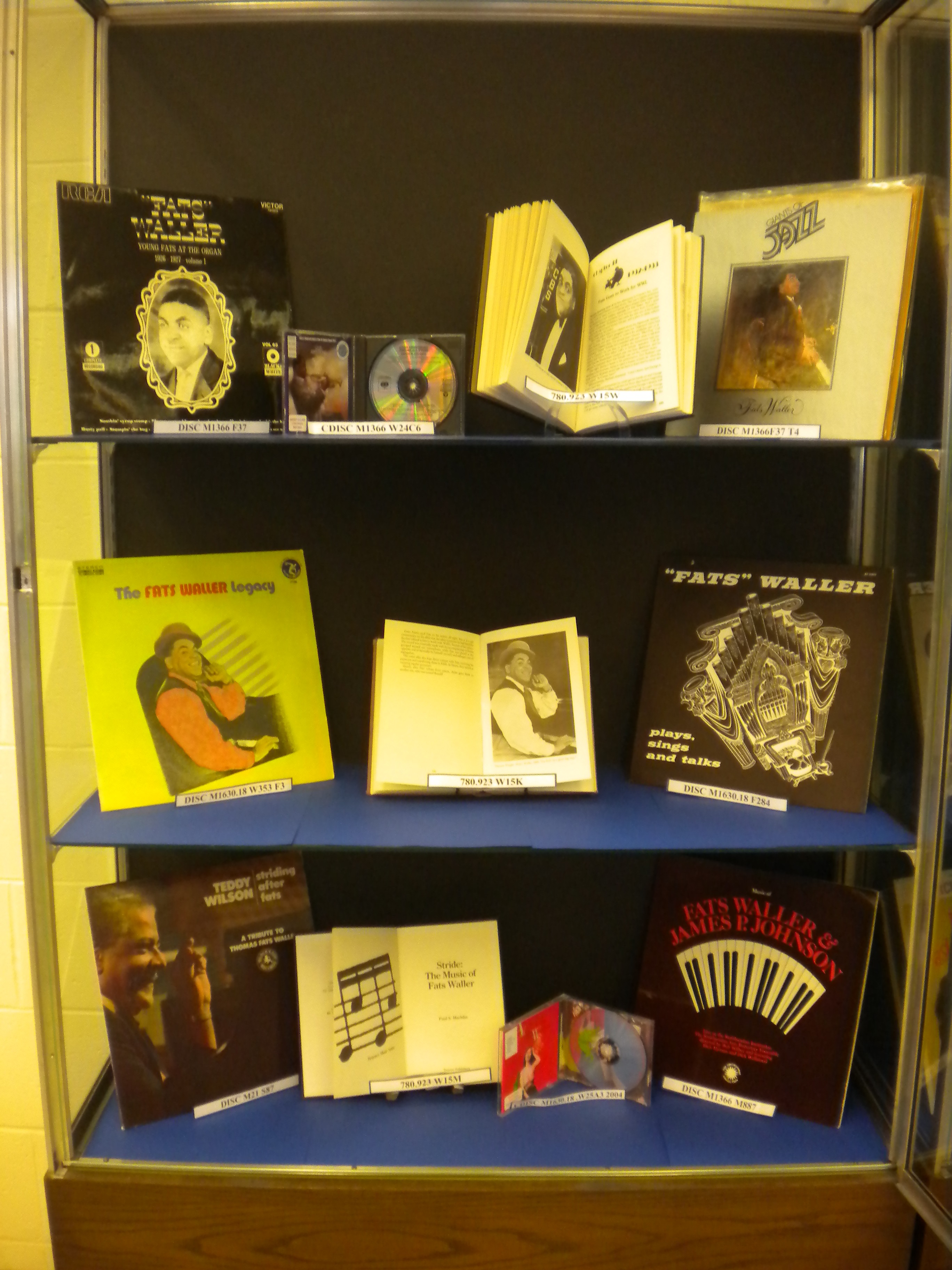 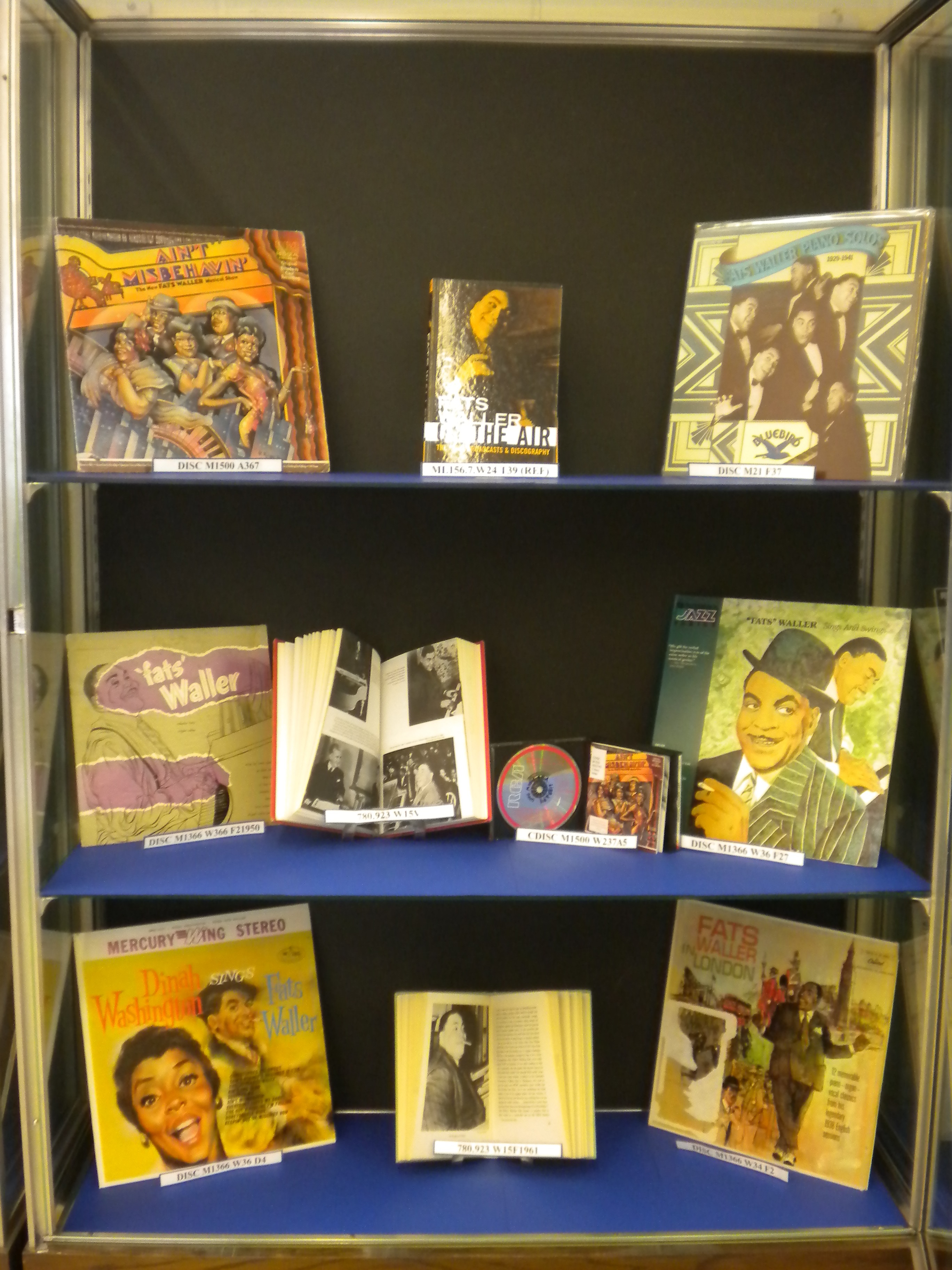 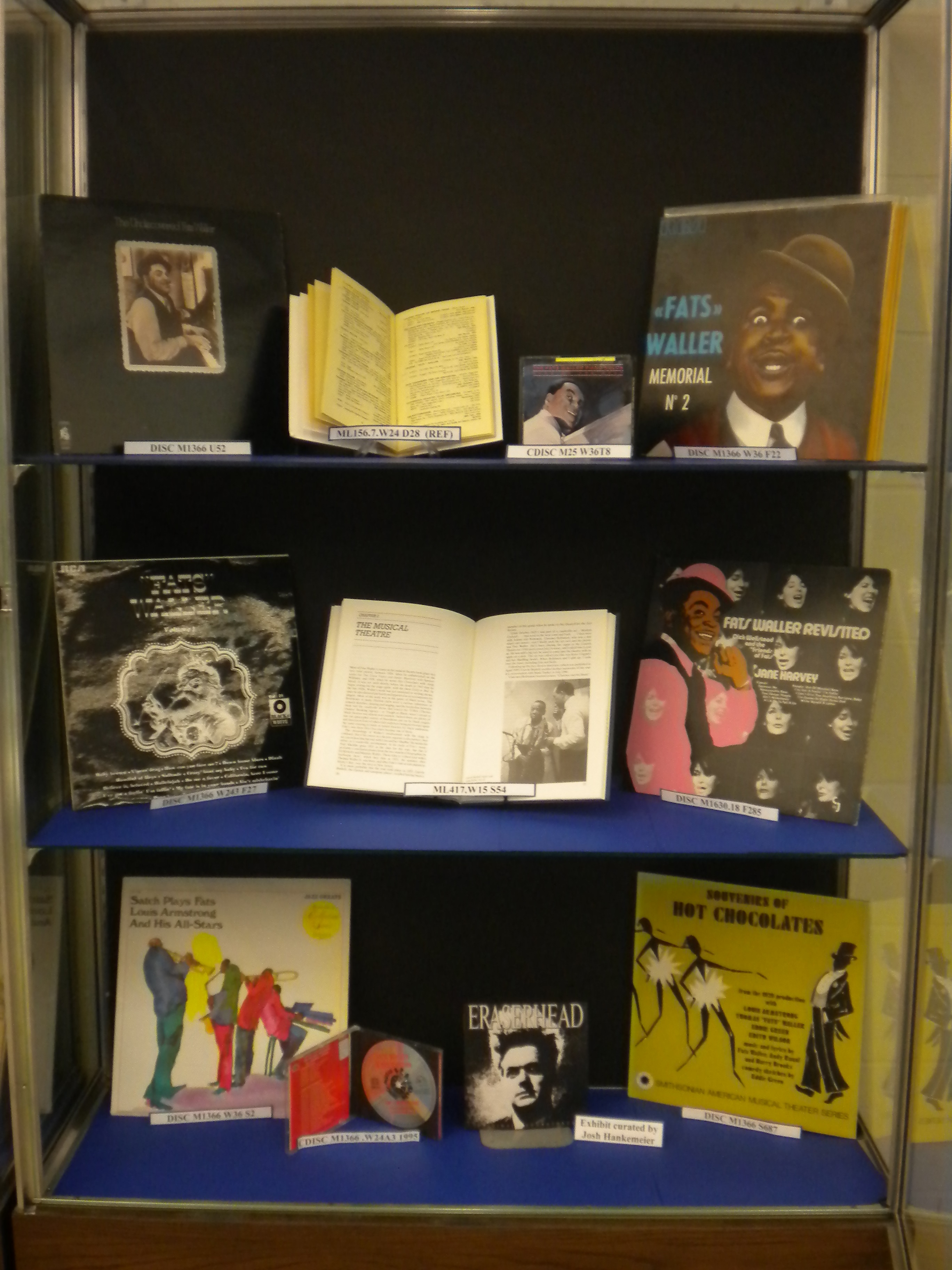 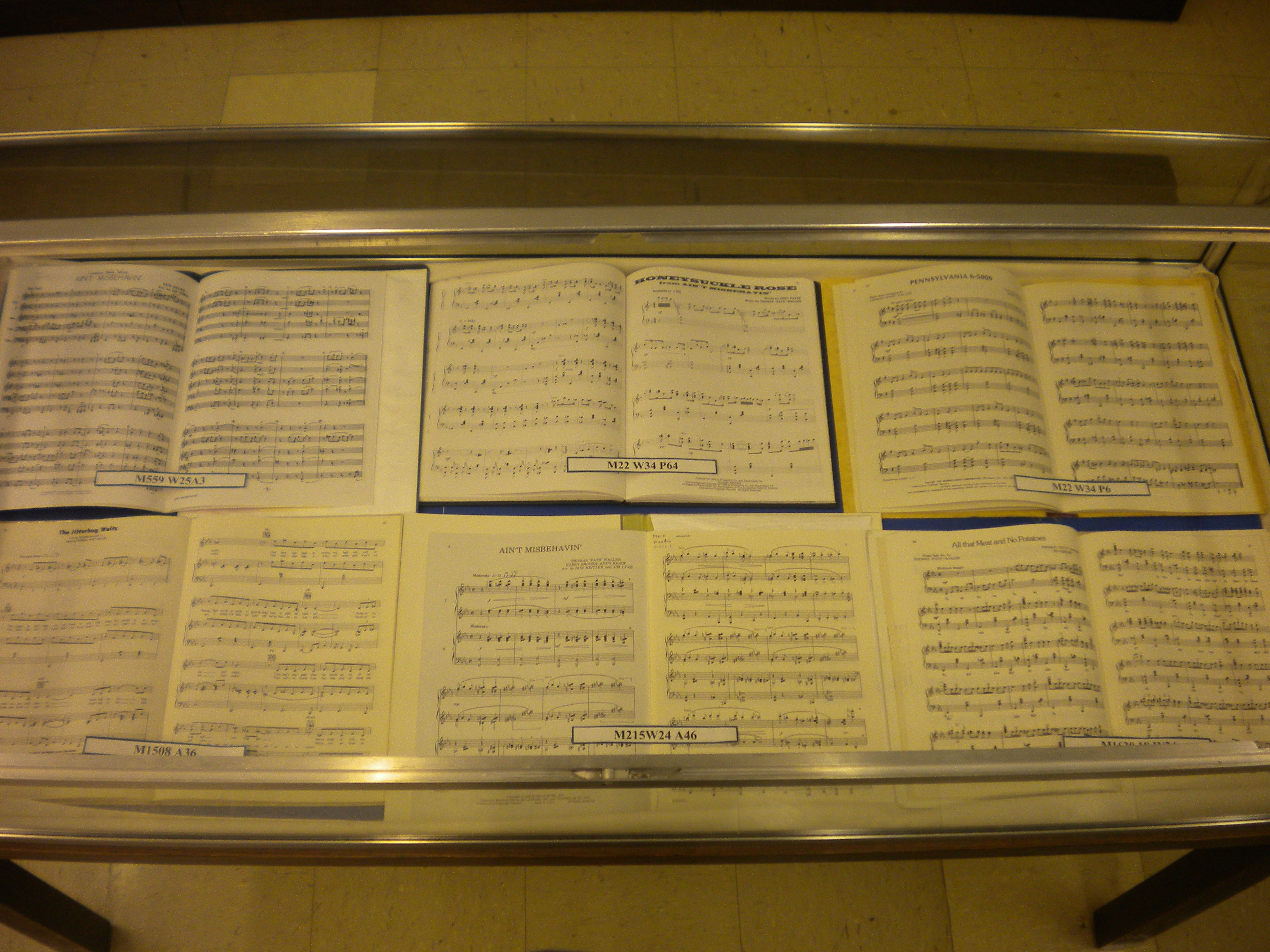