From the Cole Porter entry at the Grove Encyclopedia of Music and Musicians (Oxford Music Online):

(b Peru, IN, June 9, 1891; d Santa Monica, CA, Oct 15, 1964). American songwriter. His parents were wealthy and his mother, Kate, an accomplished amateur pianist, arranged for him to learn violin from the age of six and piano from the age of eight at the Marion Conservatory, Indiana. Porter began writing melodies – The Bobolink Waltz (1902) for piano was his first published work – and contributed words and music for amateur shows at the Worcester (Massachusetts) Academy (1905–9) and for the Dramatic Club at Yale University (1909–13). He sang with and conducted the university glee club and wrote two songs, Bingo Eli Yale and Bulldog, which remained popular as Yale football songs. For a time he studied law, but in 1915–16 studied harmony and counterpoint at Harvard University. In 1915 two of his songs were performed on Broadway (‘Esmerelda’ in Hands Up and ‘Two Big Eyes’ in Miss Information) and in 1916 he had his first Broadway show, See America First, a ‘patriotic comic opera’ modelled on Gilbert and Sullivan; all these shows were failures.

Porter moved to Paris in 1917, distributing relief supplies for three months, but his own frequently cited claims to military service in Paris during the rest of World War I are unsubstantiated. In 1919 he remained in Paris, married a socialite, and gained a reputation for giving fashionable parties in Paris, Venice, and on the Riviera, attended by the young, wealthy social élite. Meanwhile in 1919 he briefly studied counterpoint, composition, orchestration and harmony with Vincent d’Indy at the Schola Cantorum. He frequently performed his own songs at his parties; they matched the chic, esoteric mood of his social circle, but were slow to find acceptance in the theatre despite performances of Hitchy-Koo of 1919, Greenwich Village Follies of 1924 and Paris (1928). In 1923 he wrote music for a ballet, Within the Quota, which was introduced in Paris and New York by the Swedish Ballet (revised as Times Past, 1970) and is one of the earliest examples of symphonic jazz. Porter first achieved popular success in 1929 with Wake Up and Dream in London, and Fifty Million Frenchmen in New York. There followed Gay Divorce (1932) with Fred Astaire, for whom he wrote ‘Night and Day’, and Anything Goes (1934) and Panama Hattie (1940) with Ethel Merman; for these and other song-and-dance musicals (some of which were later filmed) he wrote songs combining witty, often cynical words with what were to become some of his best-known melodies, for example ‘Let’s do it’, ‘Night and Day’, ‘I get a kick out of you’, ‘Begin the Beguine’, ‘Just one of those things’, ‘You’re the Top’ and ‘It’s De-lovely’. He also wrote songs for several films, notably Born to Dance (1936) and Rosalie (1937), and for revues.

In 1937 Porter was injured in a riding accident on Long Island, which cost him the use of his legs and required the eventual amputation of one, and caused him constant pain for the rest of his life. The demoralizing effect of this and the lack of any success with his songs for the next ten years gave rise to self-doubts and public speculation about his abilities as a songwriter. In 1948, however, he produced his masterpiece, Kiss Me, Kate; this musical play, based on Shakespeare’s The Taming of the Shrew, was a departure from the song-and-dance musical comedies he had written, but it included some eight songs that became immensely popular. Of his later musicals only Can-Can (1953) was successful. He also wrote songs for films in Hollywood, notably High Society (1956), in which Bing Crosby and Grace Kelly sang ‘True Love’; a film biography with 14 of his songs, called Night and Day, was made in 1946. Porter’s wife died in 1954 and he became a semi-recluse in New York for the last years of his life. Several of his shows were revived in the 1960s, and there have been revues based on his life and work.

Porter was musically one of the most thoroughly trained popular songwriters of the 20th century, though he was perhaps better known as a lyricist; his texts were in the height of fashion, seldom sentimental, and filled with doubles entendres and witty rhymes, even referring directly to sex and drugs. At first his songs were too shocking for the theatre (he never wrote for Tin Pan Alley) and they retain much of their freshness. Many of his melodies have chromatic descending lines (e.g. ‘Let’s do it’), or are slow with long lines spun from repetitions, sequences and variations of single motifs (e.g. ‘What is this thing called love?’). Many have sections of repeated notes, chromatic figures, or narrow ranges suggesting monotony (e.g. ‘Ev’ry Time we say Goodbye’). His ability to move between major and minor modes within a single melody, often within a single phrase, was remarkable. He experimented with harmony, used triplet figures within duple metres, and wrote in extended forms unusual in popular song (‘Begin the Beguine’ is 108 bars long and also displays Porter’s typical penchant for Latin rhythms). Wilder (1972) observed that after the mid-1950s the quality of Porter’s songs deteriorated, but that until then he had created perhaps the most theatrically elegant, sophisticated, and musically complex songs of American 20th-century popular music.

Pictures from the Cole Porter Exhibit 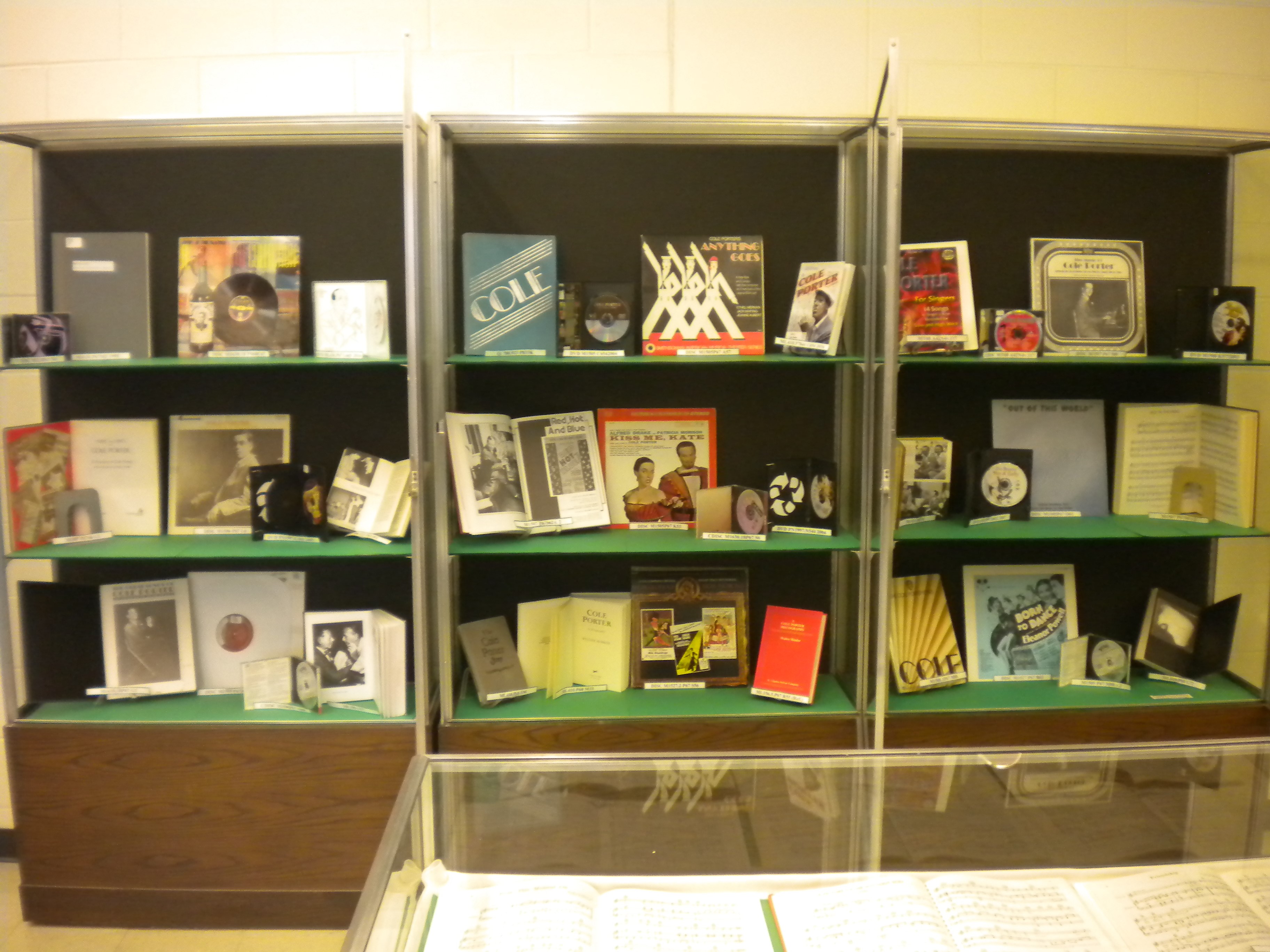 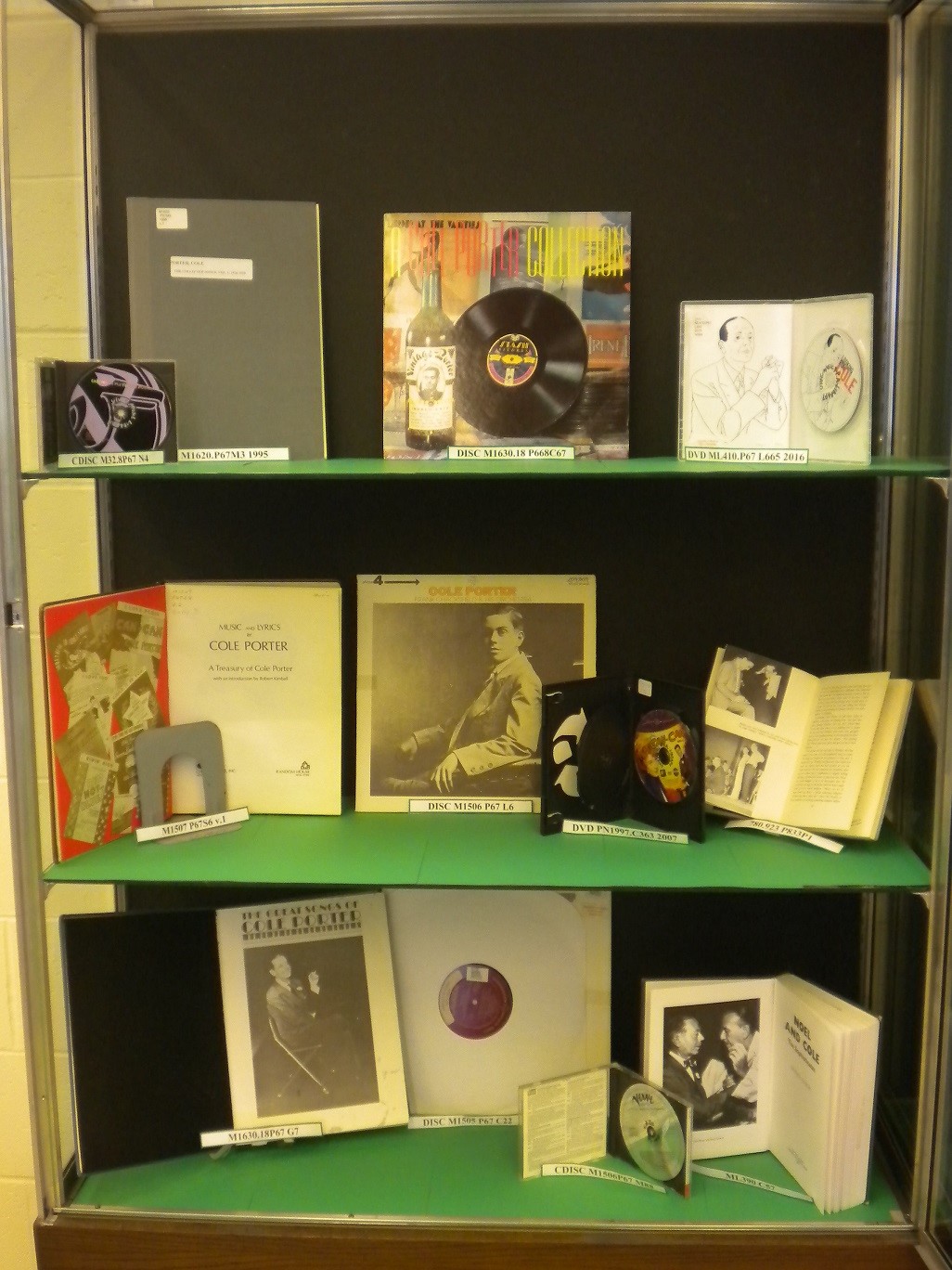 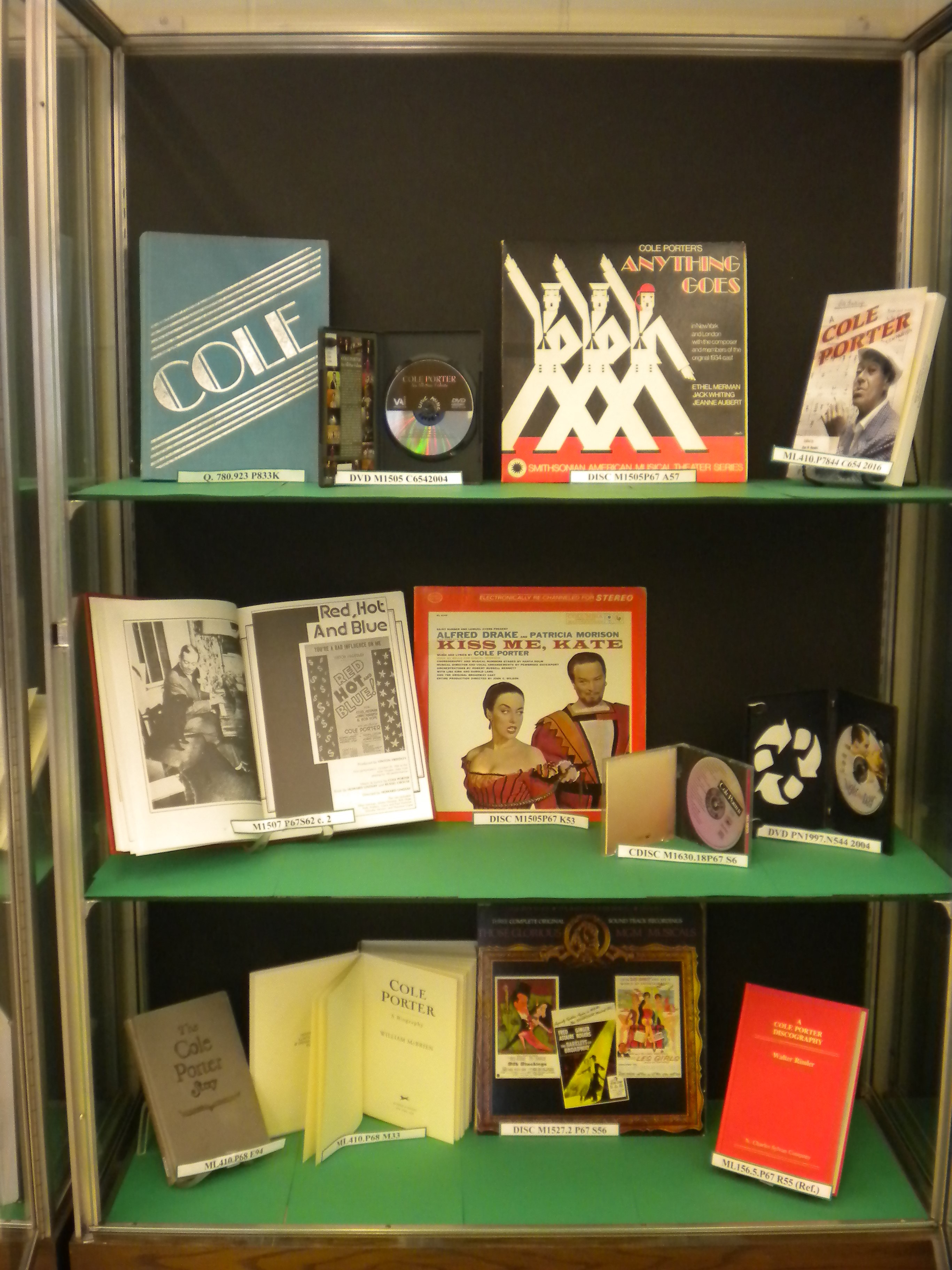 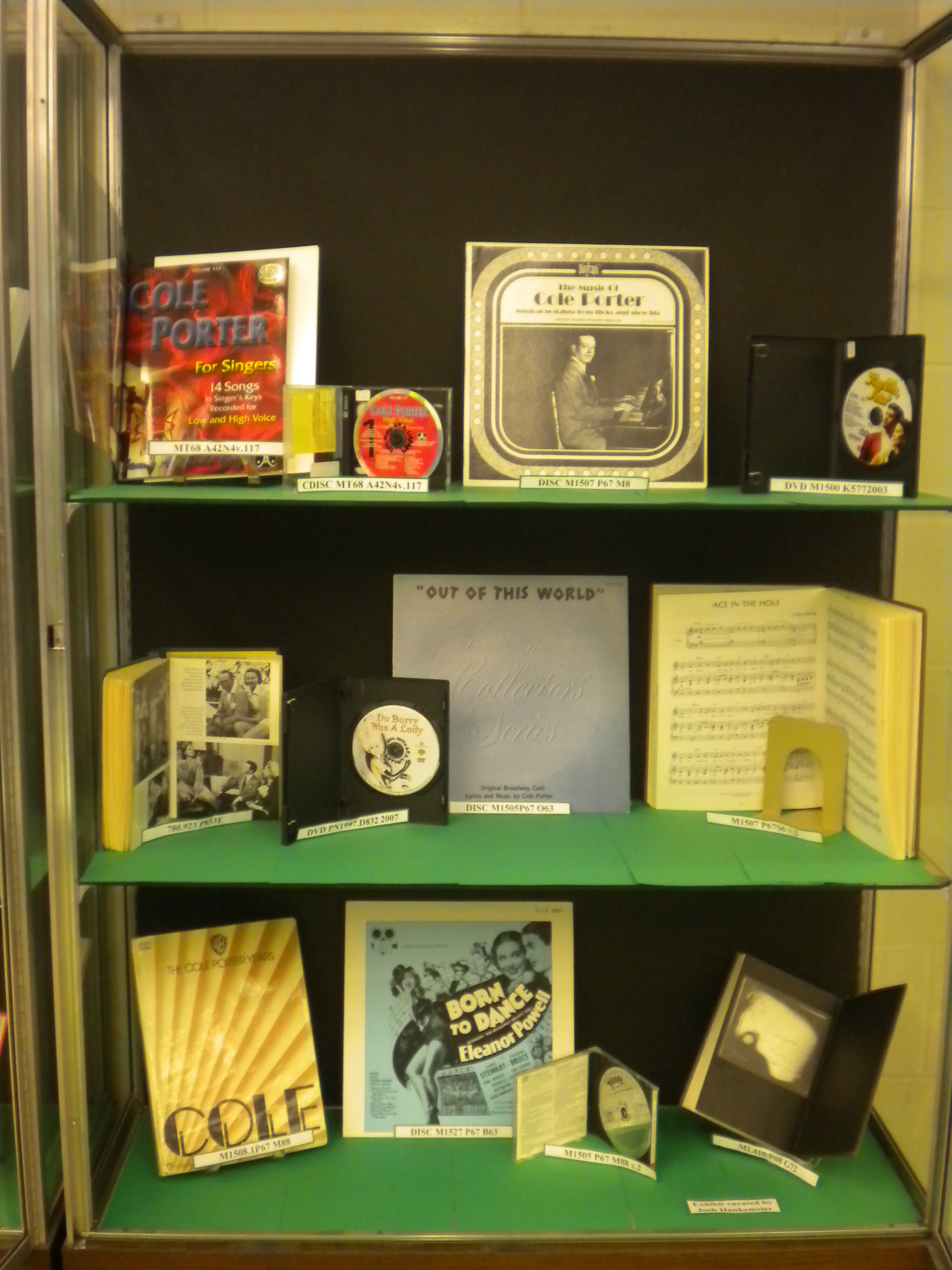 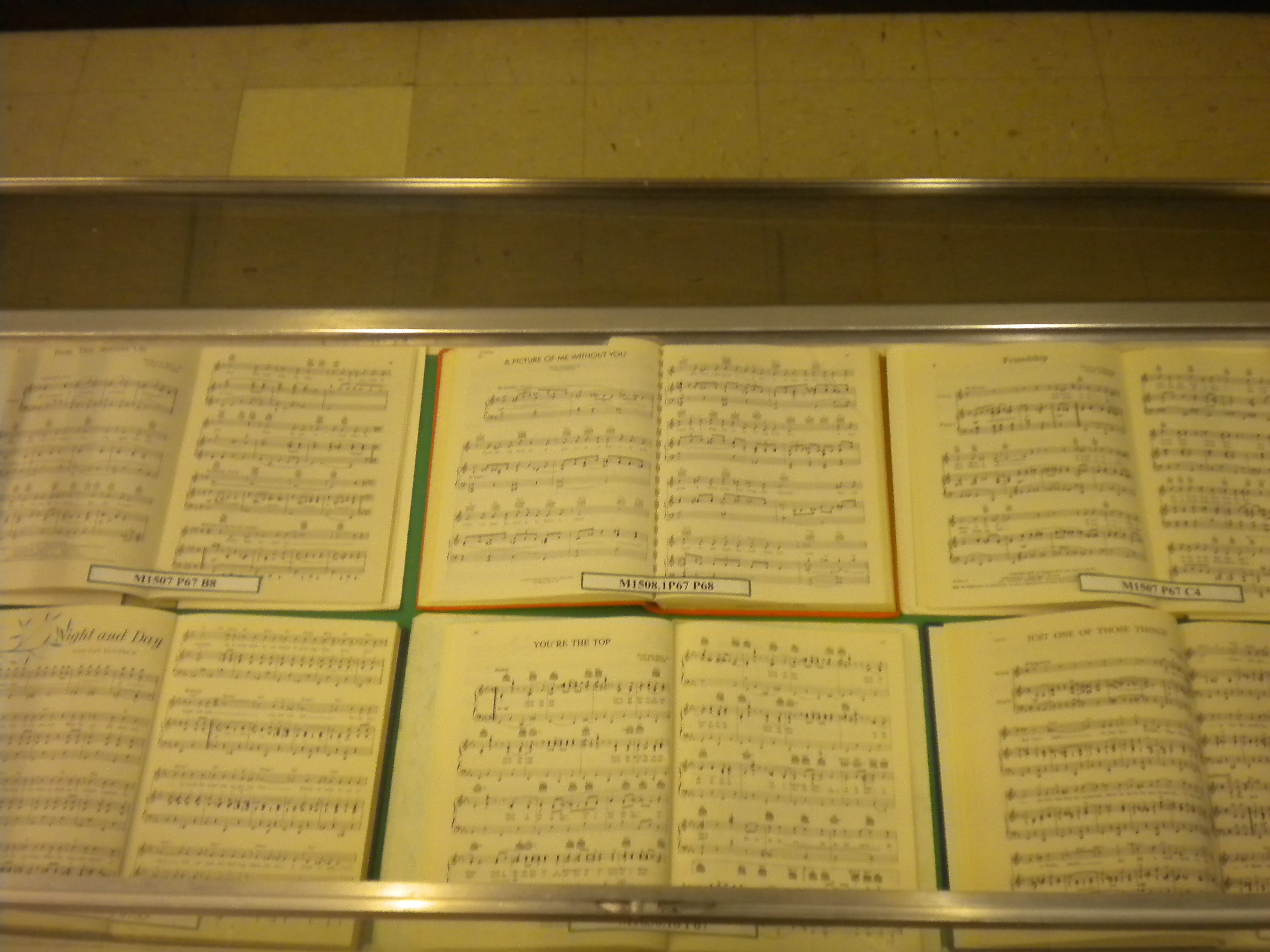