Excerpt from the Disco entry at the Grove Dictionary of Music and Musicians (Oxford Music Online):

A form of dance music that dominated popular music during the late-1970s. It features regular bass drum accents on every beat, frequent use of orchestral instruments and synthesizers, Latin percussion, and simple lyrics oriented around dancing, romance and a party-led life style. The term derives from discothèque: venues that began playing pre-recorded dance music in the early 1960s.

Disco emerged from clubs in New York City that catered primarily to African-American, Latino and gay subcultures. Based on the ‘sweet’ soul sounds popularized by the Motown and Philadelphia International recording companies, disco also included funk and Latin elements, and initially included a stylistically diverse range of songs. Its impact extended beyond musical style, challenging prevalent notions in popular music criticism about authorship and creativity. The central figure in this challenge was the DJ. Because DJs were responsible for selecting and sequencing songs, it was their taste that dictated disco’s sense of style rather than the singers and instrumentalists of soul and rock musics; successful DJ’s could acquire their own following in much the same way as a recording artist. In fact, the disco DJs predilection for reconfiguring existing recordings by fading out of one song and into another led to the recording industry’s invention of the 12-inch single, designed for easier editing. DJs shared the creative locus of the disco scene with the audience itself, as the focus on dancing stressed social interaction.

Disco as a distinct musical genre began to coalesce in 1973 with the release of several ‘sweet’ soul recordings that featured simplified funk rhythms and lush orchestrations, including Harold Melvin and the Blue Notes The Love I Lost, Barry White’s I’m gonna love you just a little more baby, and the Love Unlimited Orchestra’s Love’s Theme (produced by White, who became one of disco’s first stars). By 1973 discos had become widespread enough so that popularity in the dance clubs could generate a pop hit, a crossover process that began with the dance funk classic Soul Makossa by Cameroonian Manu Dibango, followed in 1974 by The Hues Corporation’s Rock the Boat and George McCrae’s Rock your baby. Another important early disco recording, Van McCoy’s The Hustle (1975), launched the most popular dance step of the era.

During 1975–6, disco began to concentrate on two main tendencies. Rhythm and blues disco derived more directly from previous styles of soul and funk, often retained gospel-oriented vocals and syncopated guitar and bass parts, and was sometimes recorded by self-contained bands associated with funk such as The Ohio Players, Kool and the Gang and the Commodores. Its early style was exemplified by K.C. and the Sunshine Band, whose massive hits Get down tonight and That’s the way I like it established a new form of infectious Latin-influenced dance-funk, retaining the stratified interlocking of horns, bass and guitar of funk in a simplified form, but substituting repetitive verse-chorus structures for open-ended vamps, and reducing the lyric content to a few simple phrases. Eurodisco tended to feature simple, chanted vocals, less syncopated bass parts, thicker arrangements filled with orchestral instruments and synthesizers, and relied on a producer who directed anonymous studio musicians. Its songs often filled entire album sides and attempted to usurp some of the DJ’s creative role by sequencing a series of contrasting episodes over an unvarying tempo. Eurodisco arrived in 1975 with Donna Summer’s Love to love you, baby: producers Pete Bellote and Giorgio Moroder embedded Summer’s suggestive moaning in a 17-minute, orchestrated epic in which sections of Summer’s vocalizing alternated with through-composed instrumental sections. The enormous success of this recording along with Silver Convention’s Fly Robin Fly, also from 1975, established that a mass audience existed for Eurodisco.

Although references to discos in song lyrics and titles were common and the popularity of club hits increased in the pop charts throughout 1976, the genre did not fully emerge into mainstream American life until late in 1977. This was also when aspects of the musical style, largely culled from Eurodisco, consolidated into the form by which disco is now remembered. Textures were thickened with orchestral instruments and synthesizers, while the drums and bass grew steadily busier and less syncopated. The drums added frequent and regular off-beat accents on the hi-hat cymbal to the on-beat accents of the bass drum; and bass patterns frequently filled up every quaver beat, with fills played in alternating pitches an octave apart. The final transformation of disco from a genre associated with gays, blacks and Latinos, to one embraced by straight, white Americans occurred with the overwhelming success of the film Saturday Night Fever, released late in 1977. The soundtrack featured new songs by the Bee Gees, an Australian trio who had joined the disco bandwagon two years earlier to revive their dormant careers, and an assortment of songs from the preceding two years by the Bee Gees, Kool and the Gang, The Trammps and Walter Murphy. The soundtrack yielded four number one singles and became the best-selling disco album up to that time.

The years 1978–9 witnessed the saturation of the pop music market by disco. The sudden dominance of disco was partly helped by the complete abandonment by many radio stations of their former format for disco, and by increasingly standardized and centralized radio programming in the USA. Other rock stars followed the Bee Gees, and 1978 saw major hits by the Rolling Stones (I miss you) and Rod Stewart (Do ya think I’m sexy?), both firmly in the disco mould. The Eurodisco style had clearly superseded rhythm and blues disco in the public notion of what constituted the genre, although a few artists on the borderline between funk and disco continued to succeed. The most important of these was Chic, whose last major hit, Good Times (1979), is notable for providing the musical basis for the first rap hit, Rapper’s Delight by the Sugarhill Gang (1979).

The extreme and sudden popularity of disco rather quickly produced a backlash among both white rock fans, whose anti-disco hysteria was tinged with homophobia and racism, and fans of soul and funk, who resented disco for crowding out other forms of African-American dance music. This backlash contributed to the decline of disco, which ceased to dominate popular music after 1979. It has, however, continued to influence other forms of dance music. House music, in particular, owes much of its repetitive bass drum patterns to those found in disco; rap, hip hop, and techno gained some of their musical, and many of their performance, conventions from disco, particularly in the creative role of the DJ and the innovative use of technology. A performer such as Madonna owed much of her early success to popularity in dance clubs, and the music of even such crossover artists as Prince and the Jackson siblings is unimaginable without the immediate historic backdrop of disco.

Pictures from the Disco Music Exhibit 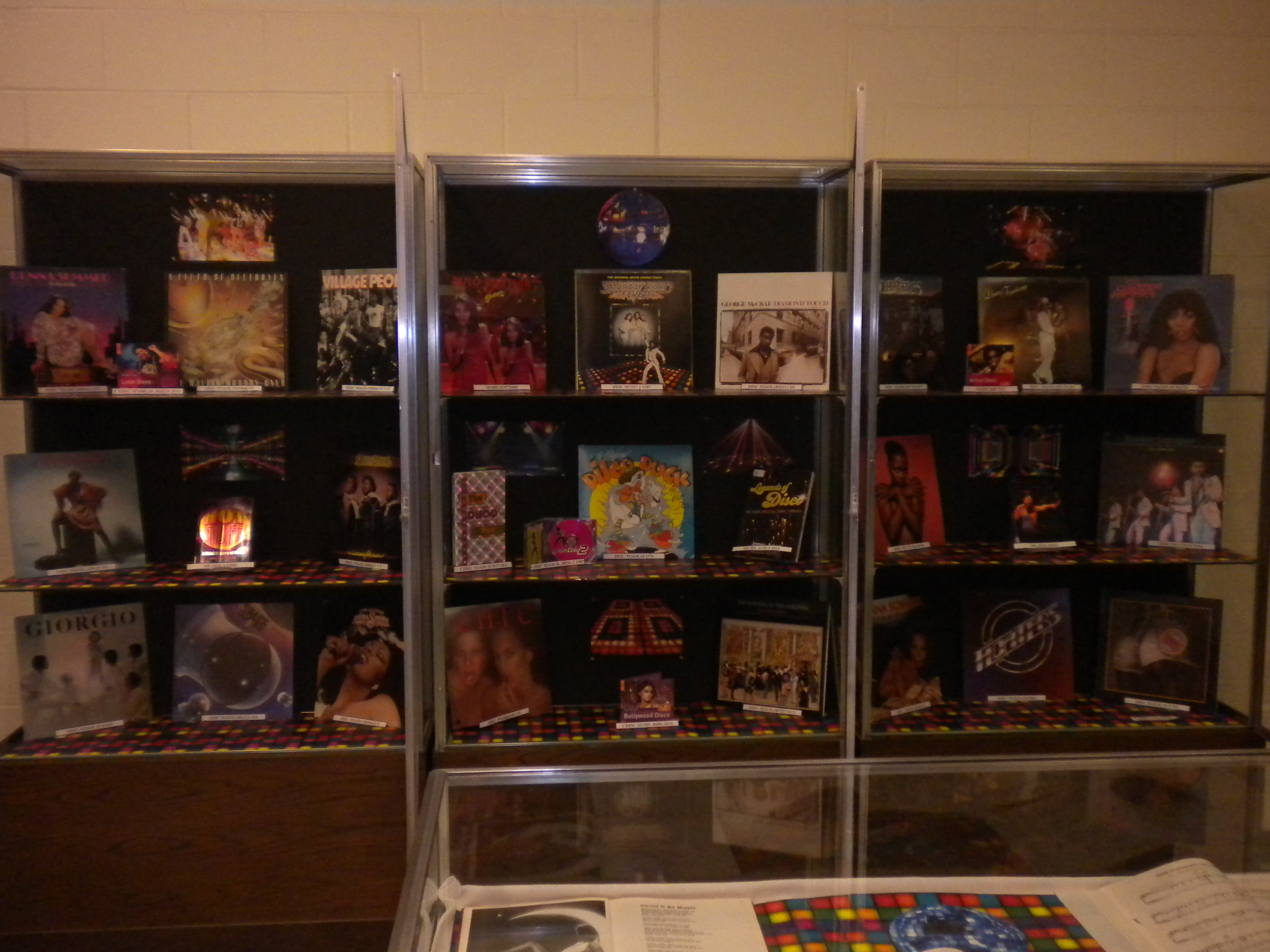 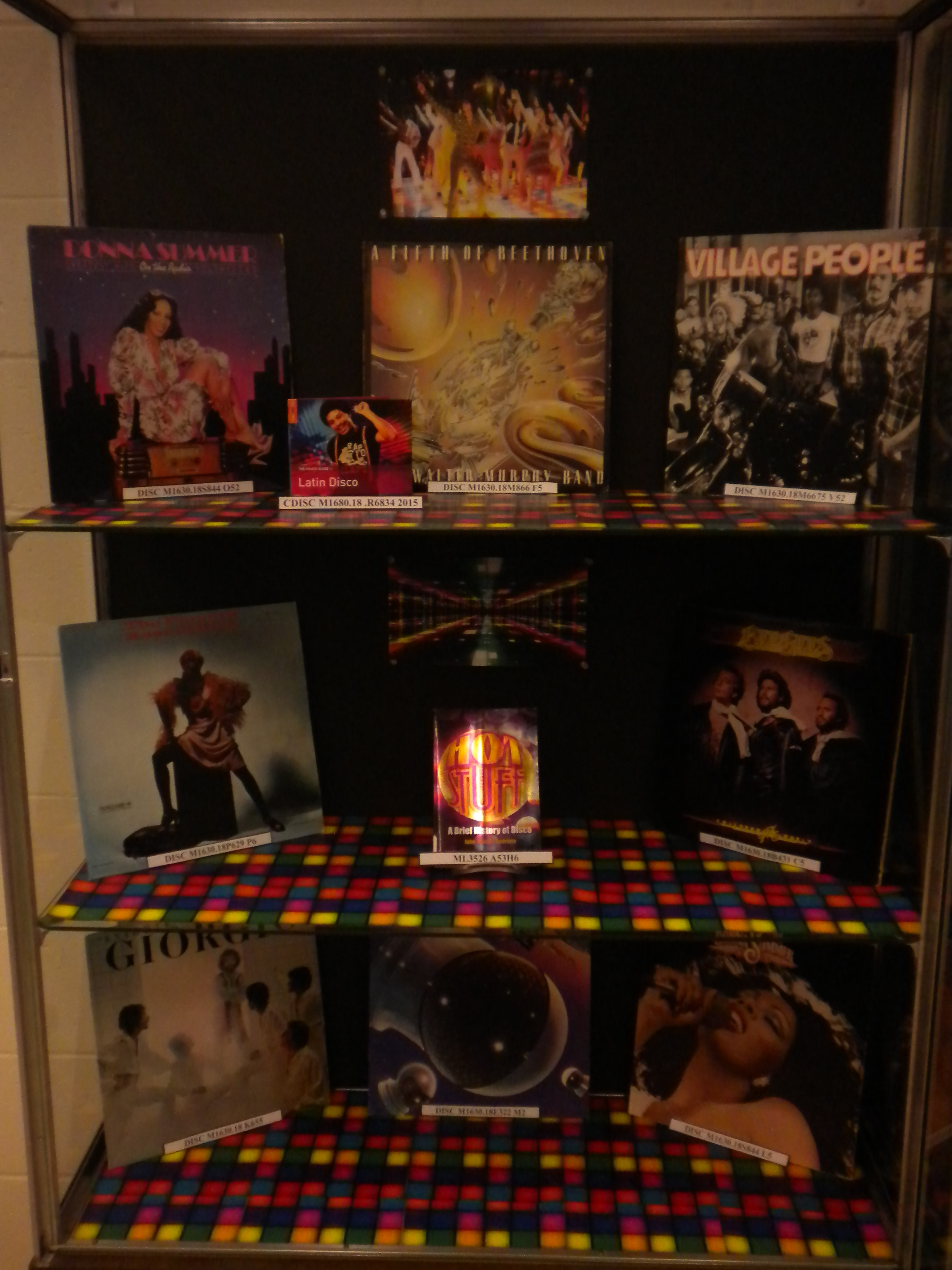 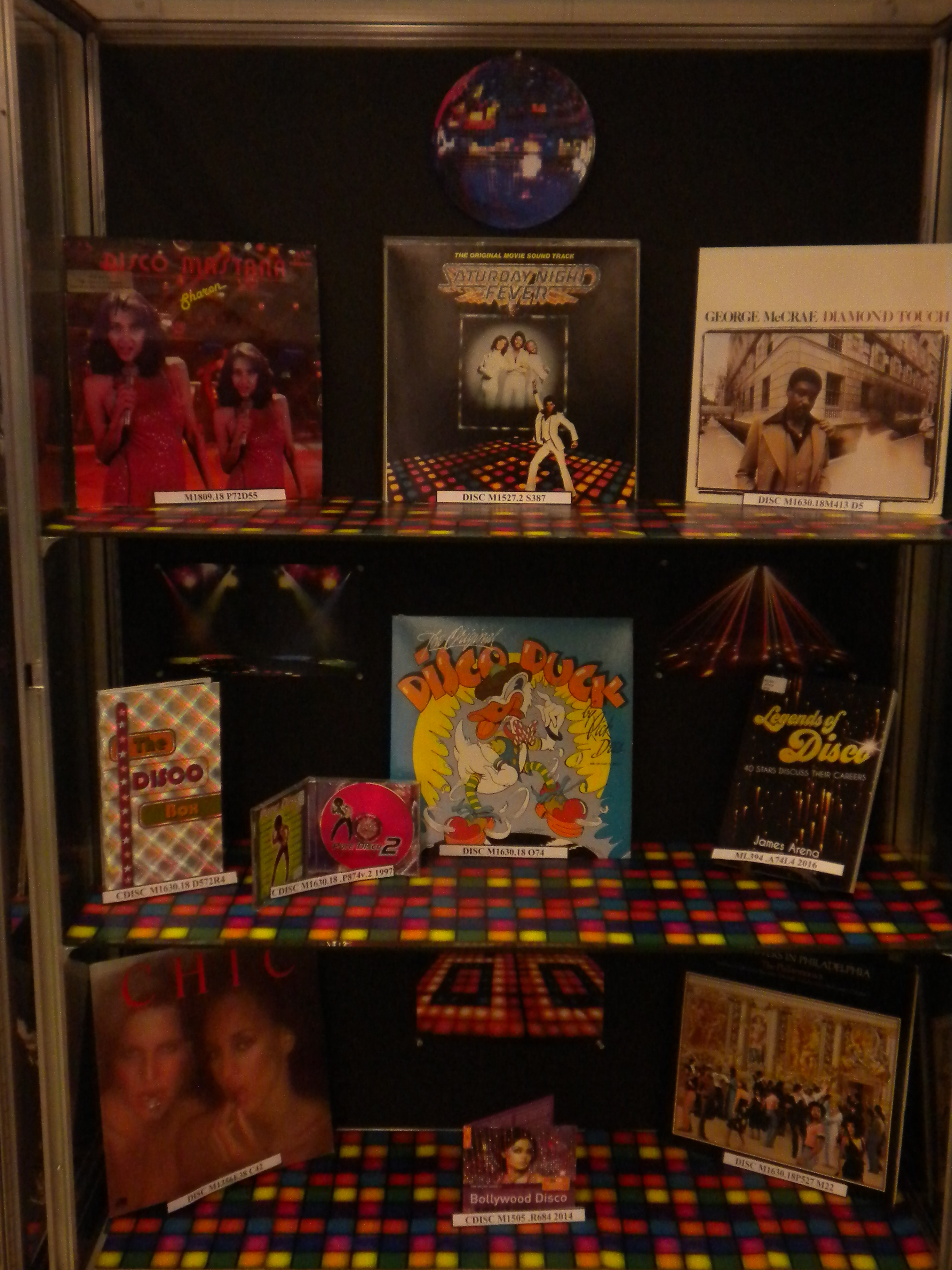 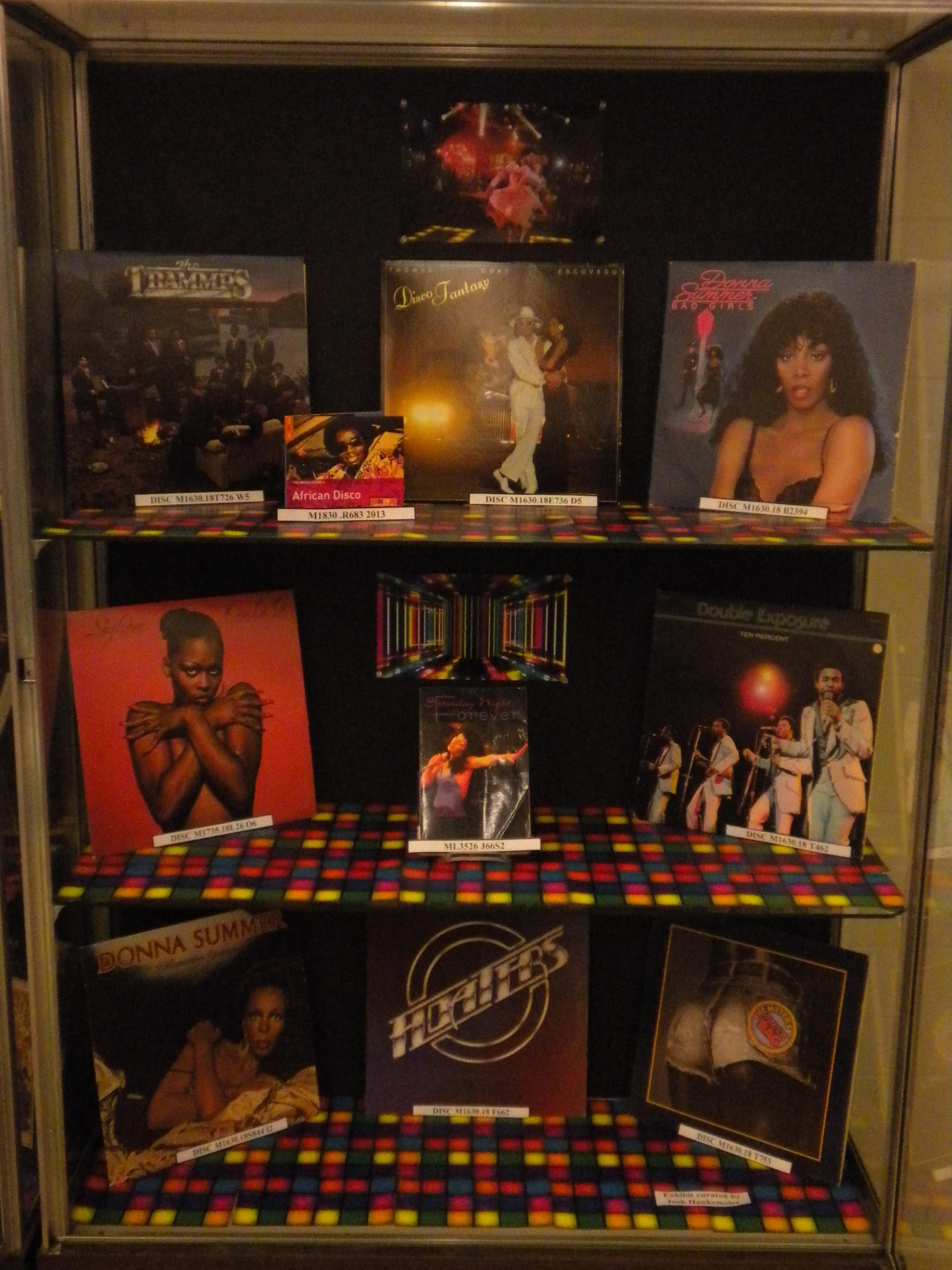 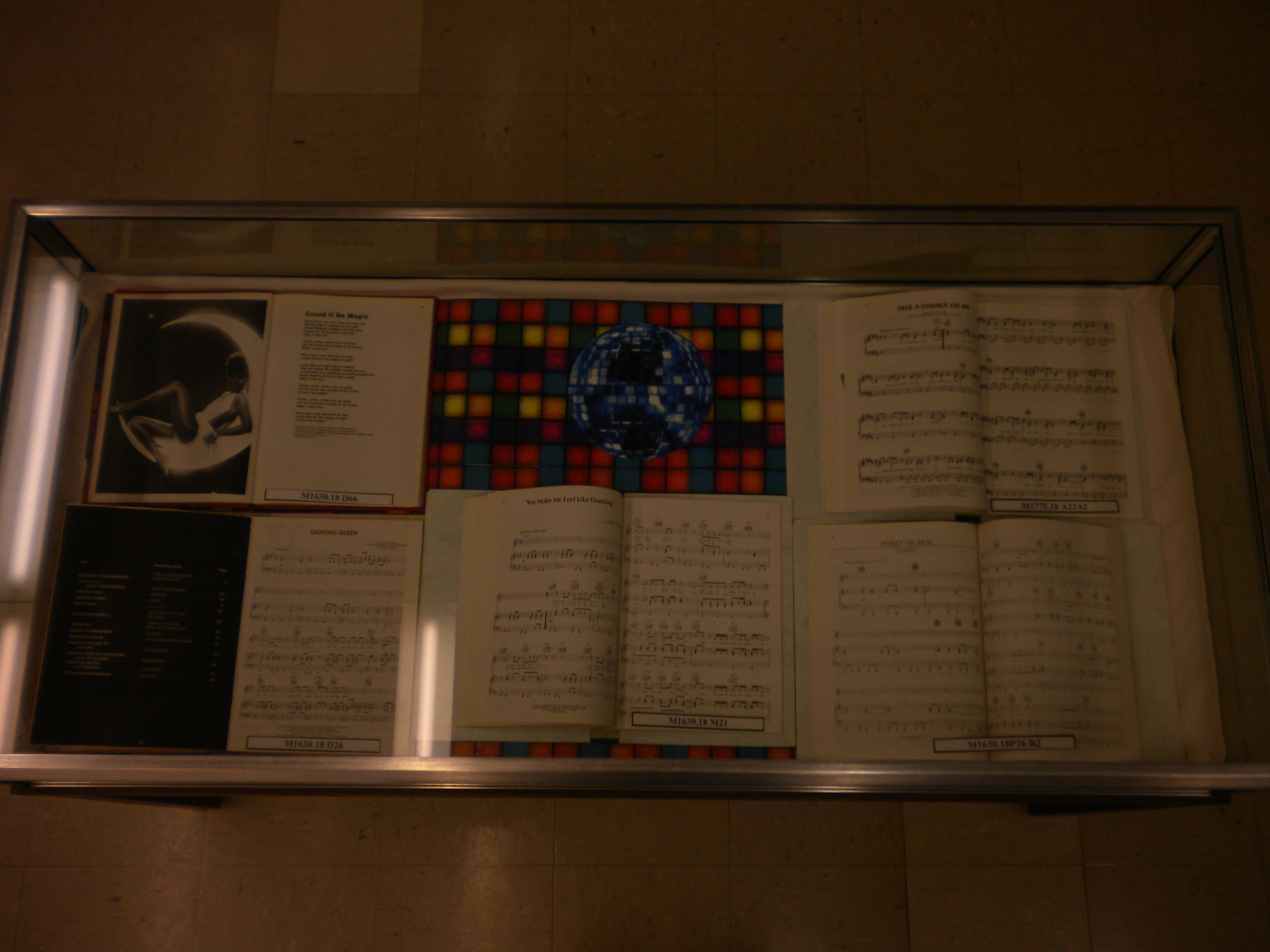