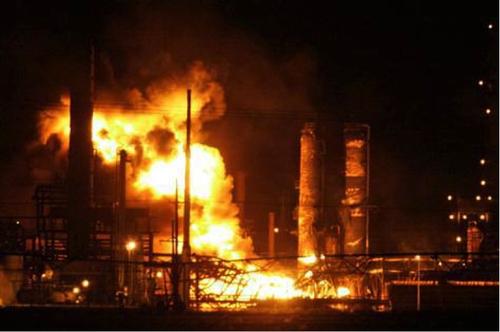 Photo from Design News, originally from this blog.

In 1984, the Union Oil Company refinery in Romeoville, Illinois, employed more than 700 workers and processed 151,000 barrels of oil a day. Around 6 PM on July 23, 1984, a refinery worker noticed vapors escaping from a hairline crack in a high-pressure, 55-foot tower filled with gas. The worker tried to shut down the tank, but before the pressure could be redirected a spark from an unknown source ignited the vapors. The ensuing explosion launched the 34-ton tank more than 3,400 feet and engulfed much of the refinery in flames.

Firefighters from the Union Oil Fire Brigade responded immediately with the company’s two engines, followed closely by the Romeoville Fire Department. In fact, Union Oil did not need to alert the city fire department as firefighters had felt the blast at the fire station. As a result of the explosion, many towers, tanks, and other refinery structures began to rupture or collapse and the site’s fire hydrant system was damaged. Forced to draft water from a nearby sanitary canal, firefighters were just beginning to attack the flames when a tank containing liquefied petroleum gas erupted. The explosion created a huge fireball that rose thousands of feet into the air and sent many emergency responders running, but several members of the Union Oil Fire Brigade were caught in the blast. Later reports stated that the explosion was felt fifteen miles away and an airplane carrying two Romeoville police officers 1,500 feet over the city at the time was hit with debris from the blast.

“It was like Hiroshima,” Lieut. Ed Smith of the Romeoville Fire Department said of the blast. “Everyone I talked to after the second explosion thought they were dead, and I was among them.” The enormity of the fire brought mutual aid fire apparatus and ambulances from more than 30 cities, including two medical evacuation helicopters from the University of Chicago Hospital and a Chicago Fire Department fireboat sent via the sanitary canal. An AMOCO refinery in Indiana even sent truckloads of Aqueous Film-Forming Foam (AFFF) to help extinguish the fire. The assistance was welcomed, as firefighters were needed to both put out the flames and also prevent more refinery structures from catching fire. R.F.D. Chief A.F. Stadelmaier later stated, “Our concern was to keep the rest of the plant cool.” Once the burning structures were isolated, fire officials determined that allowing the fires to burn out on their own was the safest way to extinguish the blaze. The fires burned throughout the night, luckily without further explosions or loss of life.

Seventeen employees of the Union Oil Company were killed during the fire, including ten members of the fire brigade. Coroners had to rely on dental records to identify some of the victims. Damage estimates placed the cost of the fire as high as $500 million and, in terms of damage to property and loss of life, it still ranks as one of the worst refinery fires in U.S. history. Moreover, the only other Illinois fires that resulted in more firefighter deaths are the 1910 Union Stockyards Fire and the 1893 World’s Columbian Exposition Fire.