Significant Illinois Fires: Our Lady of the Angels School Fire

Our Lady of the Angels School Fire: Introduction 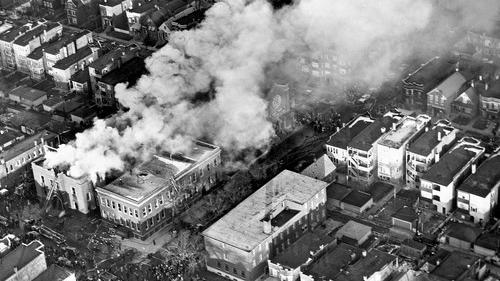 During the 1950s, the Our Lady of the Angels parish was one of the largest in the Chicago archdiocese. In addition to serving more than 4,500 families, the parish operated a school for more than 1,600 students, kindergarten through eighth-grade. On December 1, 1958, a fire started in a trash pile in the school basement and burned unnoticed for at least twenty minutes. When the heat broke a basement window, fresh air blasted the fire up a wooden stairwell as if in a chimney. The fire blew past the stairwell’s first floor fire doors, but rushed into the unprotected second floor hallway, spreading smoke and gases throughout the floor and trapping students and teachers in their classrooms.

More than 200 firefighters, from 22 engine companies, seven ladder companies, and ten squad companies, responded to the Our Lady of the Angels School fire. Firefighting efforts were delayed, however, when the Chicago Fire Department was first sent to the wrong address and then later had to use a ladder as a battering ram to break through a locked, eight-foot iron fence on the school’s property. These delays, combined with the “fire-friendly” atmosphere inside the school, severely limited their rescue options. The heat and smoke overwhelmed the firefighters when they attempted to use the stairs to reach the second floor, leaving the classroom windows as the only means of escape. In fact, one firefighter was on a ladder outside a window when he noticed that the white shirts on the students trapped inside were turning brown. In the few seconds before the room reached flashover, the firefighter saved the lives of ten students by dragging them through the window and dropping them 25 feet to the ground. While firefighters rescued many of the trapped students and teachers, the fire was too powerful for their efforts to be completely successful. In the end, of the estimated 340 students and teachers initially trapped on the second floor, 95 perished in the fire. Some of the victims were completely untouched by flames; the noxious gases had simply been too suffocating. Chicago Fire Commissioner Robert Quinn said of the fire, “It was the worst thing I have ever seen or ever will see.”

Investigations after the fire determined that the school’s fire protection system was inadequate. The school lacked fire sprinklers and detectors, the stairwells only had first-floor fire doors, and there was only one fire escape. Moreover, the school’s interior primarily contained highly combustible materials. As a result, many of the national fire codes governing schools were drastically overhauled. The National Fire Protection Association rewrote its provisions for schools, revising the exit standards and also requiring that schools be outfitted with sprinklers. Stricter codes were also enacted regarding the quality of building materials with concrete soon replacing wood and plaster in schools throughout the country. In fact, NFPA credits the lessons learned from the Our Lady of the Angels School Fire with saving the lives of countless children, noting that no school fire since 1958 has killed more than ten people.

Resources at the IFSI Library

This video features classic C.F.D. apparatus from the 1950s along with video of the Our Lady Of Angels School fire on December 1, 1958.

This video, provided by the Chicago Fire Department, includes footage of the fire as well as comments by Retired Captain Richard Scheidt, who was one of the firefighters who responded to the fire.

This video, by the Chicago Tribune, includes photographs and video of the fire as well as recollections by a victim's family and a photographer who was at the scene of the fire.