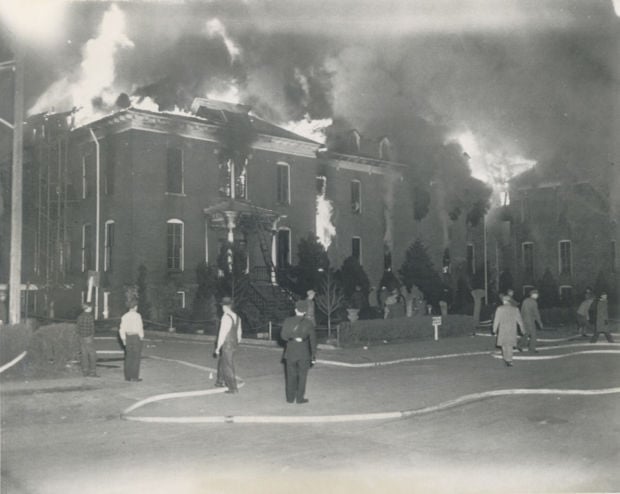 Like much of the United States, Effingham, Illinois, experienced rapid growth in the years after World War II. St. Anthony’s Hospital in Effingham had been the county’s only hospital since 1873, but in 1949 the region was quickly outgrowing the small facility. Operated by the Sisters of St. Francis, who lived in a convent next door, the hospital was sanitary and well-kept, but completely outdated. Constructed mainly out of wood and brick, the 100-bed hospital contained open corridors and staircases and many of the walls were covered with oilcloth fabrics and combustible soundproof tiles. The city was planning to build a larger, modern hospital in 1951, but tragedy struck on April 4, 1949.

Shortly before midnight, a massive fire broke out at St. Anthony’s Hospital, spreading rapidly through the building. As the hospital had no architectural components that controlled fire, the flames easily burned through the wood and plaster interior. Many of the 116 patients were immediately trapped on the upper floors, including disabled elderly residents, injured patients stuck in casts, splints, and traction devices, and a nursery full of newborn babies. A few brave doctors and nurses helped some escape, returning to the burning building multiple times to rescue patients, but the fire was too strong. Ultimately, 74 people were killed, including patients, nurses, nuns, a priest, and a hospital superintendent who ran into the flames to try to rescue his wife.

As the hospital had no fire alarm system, valuable time was lost before someone was able to set off the town’s fire siren. All but one of the 26-man Effingham Volunteer Fire Department arrived within ten minutes of hearing the siren, but by that time the fire had already burned through the hospital roof. Rescue efforts were further impeded as the small department had only three pumping engines. Until mutual aid departments arrived on scene hours after the blaze started, the firefighters had no ladder truck or other aerial apparatus to use to rescue victims from the otherwise inaccessible upper floors of the hospital. In the end, with the assistance of eleven mutual aid departments from as far away as 66 miles, firefighters were able to keep the fire from spreading elsewhere, but the hospital was virtually destroyed.

Although the cause of the fire remains unknown, investigators had little trouble pinpointing the safety deficiencies at St. Anthony’s Hospital. The combination of the combustible building materials in the open corridors, stairwells, and vertical shafts, along with the lack of fire sprinklers, detectors, and alarms had essentially doomed the hospital as soon as the fire began. In response, Governor Adlai Stevenson ordered the State Fire Marshal to evaluate all of Illinois’ hospitals to pinpoint and correct any fire hazards. Many other hospitals throughout the country also improved their fire safety measures in an effort to avoid similar disasters. In fact, as a direct result of the fire at St. Anthony’s, modern hospitals now incorporate numerous fire safety features to protect patients who cannot be quickly evacuated, including fire barriers, smoke compartments, and stairway enclosures.

This is a short documentary by AHA Student Films discussing the St. Anthony Hospital fire.