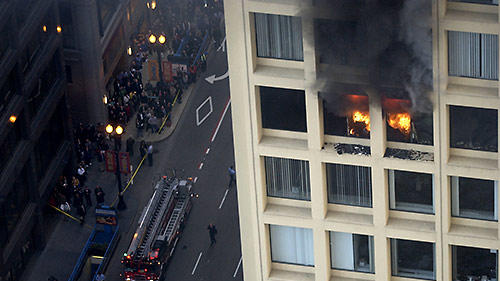 On October 17, 2003, a fire started in a supply room on the 12th floor of the 35- story Cook County Administration Building in Chicago’s Downtown Loop. The fire was relatively small, but the supply room was adjacent to one of the two stairwells in the building that employees could use to evacuate during emergencies. Responding to the fire with 135 firefighters and paramedics and 45 pieces of equipment, the Chicago Fire Department successfully contained and extinguished the fire, but six civilians died from smoke inhalation.

To attack the fire, firefighters opened a door that connected the supply room to the building’s southwest stairwell, giving them access to the flames, but also letting smoke escape into the enclosed stairway. Simultaneously, workers were attempting to evacuate the building down the same stairwell, where smoke was now rising as if in a chimney. When the evacuees turned back to exit the smoke-filled stairwell, they found that the doors back into their offices were locked. Luckily an employee on the 27th floor had placed a doorstop in the stairwell door, allowing many of the trapped people to escape the smoke. After the fire was contained, however, firefighters found the bodies of thirteen workers who did not make it up to the 27th floor. Fire department personnel revived seven of the victims, but the remaining six suffocated in the stairwell.

Initial investigations revealed a number of factors that led to the loss of life. Most notably, the building did not have sprinklers above the lobby as it was built before codes required sprinklers on every floor in skyscrapers. The building also lacked pressurized stairwells, which block smoke from flowing in, and stairwell “smart-locks” that can be unlocked remotely during emergencies. The evacuation of the upper floors, as ordered by building security without notifying the firefighters, also contributed to the tragedy. Fire experts maintain that emptying an entire building is unnecessary during some small high-rise fires. The workers on the upper floors would have been safe had they remained in their offices.

Cook County appointed an independent commission for an in-depth inquiry into the fire and, in July 2004, recommendations were issued to the city. The report incorporated and expanded upon plans and procedures the Chicago Fire Department had adopted since the fire, such as a new High-Rise Incident Command Order, which, among other policy changes, required mandatory searches of all stairwells from top to bottom during high-rise fires, and facilitated improved communications between 911 dispatch, the incident commander, and the firefighters in the building. In addition, the city also partnered with the Illinois Fire Service Institute for training in high-rise firefighting and rescue techniques to better prepare for such emergencies. These efforts were tested in December 2004, when Chicago firefighters responded to a major fire on the 29th floor of the Loop’s LaSalle Bank building. The new policies and training proved effective, as there were no fatalities.