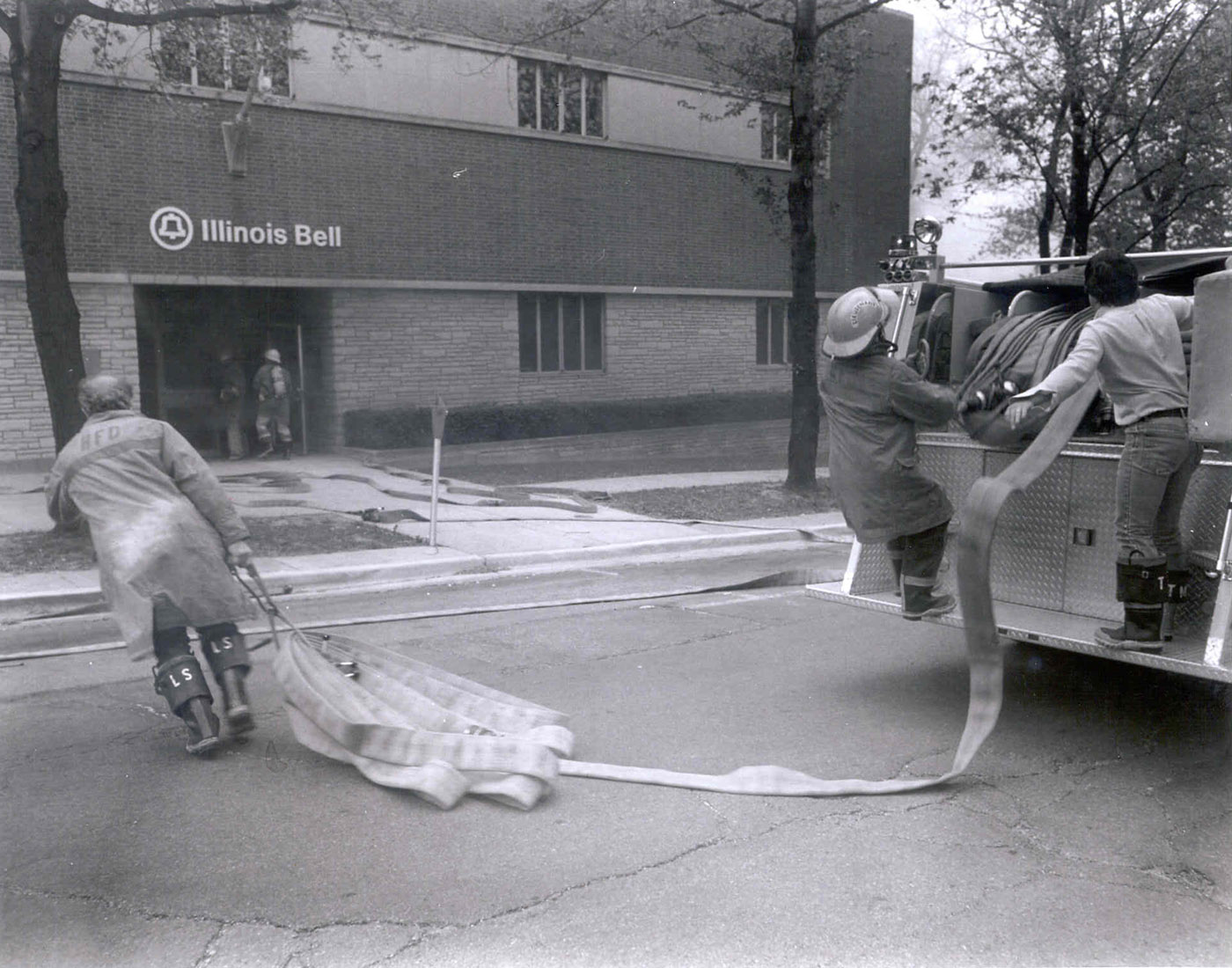 Photo from the Hinsdale Fire Department.

On Sunday, May 8, 1988, a fire broke out in the main switching room of the Hinsdale Central Office of the Illinois Bell telephone company. One of the largest switching systems in the state, the facility processed more than 3.5 million calls each day while serving 38,000 customers, including numerous businesses, hospitals, and Chicago’s O’Hare and Midway Airports. Around 4 PM, the Division Alarm Reporting Center for Illinois Bell began receiving automated reports of power failures and fire alarms at the Hinsdale Central Office, but it was nearly an hour before a technician arrived at the facility to investigate the alarms. By that point, however, smoke was pouring out of the building and telephone service had been knocked out for much of the region. In fact, the telephone technician had to flag down a passing motorist to ask him to drive to the Hinsdale Fire Department to report the blaze in person.

Immediately after arriving on scene, the Hinsdale Fire Department recognized the severity of the fire and activated the MABAS mutual aid system to bring in additional firefighters from other communities. Firefighters initially attacked the flames with dry chemical extinguishers, but this technique proved ineffective. Furthermore, the uninterruptible electrical power systems that supplied the circuits in the fire area exposed the firefighters to electrical shock whenever they used water. As the lack of telephone service prevented the fire department from contacting Commonwealth Edison for assistance, the firefighters had to shut off the power manually by disconnecting all of the building’s fuses. It was nearly two hours before the power to the fire area was completely shut off and firefighters could safely attack and contain the blaze.

In addition to the electrical dangers, the firefighters also faced toxic fumes emitted by the burning fiber optic equipment inside the facility. Recognizing the threat, the fire department called in hazardous materials experts and more than 300 civilians living within a five-block radius of the telephone office were evacuated. This safeguard proved necessary as ten firefighters had to be treated at Hinsdale Hospital for chemical fume inhalation. Later tests revealed that hydrochloric acid had formed during the fire when chlorine released by the burning cable insulation combined with the water used by the firefighters. In the end, even though the fire was contained within a few rooms in the building, firefighting operations at Illinois Bell’s Hinsdale Central Office lasted for more than 6.5 hours.

The fire at the telephone center had a significant impact on Hinsdale and the surrounding region as telephone service was lost for more than 40,000 local phone lines. As restoring service to the airports, hospitals, and emergency services was the priority, many residential areas were simply out of luck until new circuits, cables, and other materials could be brought in to replace the telephone equipment lost in the fire. It took Illinois Bell four weeks to completely restore telephone service for the entire affected region.