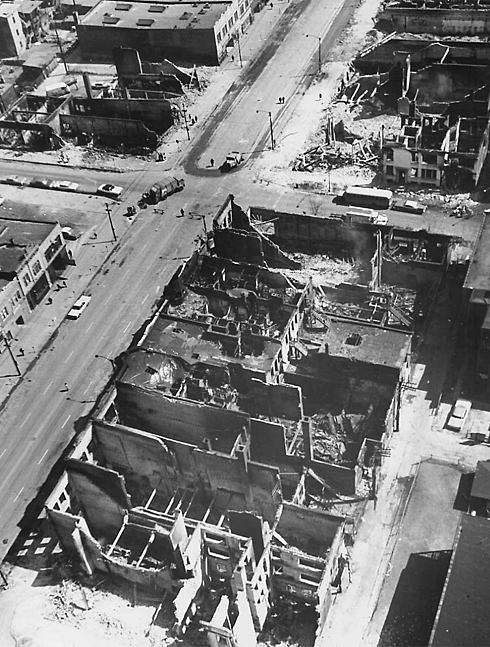 Photo from USA Today, originally from the Chicago Sun-Times.

Although he was renowned throughout much of the United States, Martin Luther King, Jr., had a particularly strong bond with the city of Chicago. When he brought the civil rights movement north in 1966, King focused on Chicago, where he moved into a poverty-stricken, predominantly black neighborhood to help draw attention to the plight of disadvantaged African-Americans. Severe racial discord was rampant in the city during that time and King was even hit with a rock thrown by a spectator during a peaceful march through Marquette Park in August 1966. King moved out of Chicago in 1967, but after he was assassinated on April 4, 1968, anger and grief caused tensions in Chicago to boil over and riots erupted in portions of the city.

During the afternoon of Friday, April 5, rioters took to the streets on the west side of Chicago. The rioters broke windows, looted stores, and set numerous buildings (both abandoned and occupied) on fire. Firefighters quickly flooded the neighborhood, as 36 major fires were reported between 4 PM and 10 PM alone. Dispatchers later reported that fire alarm calls came in faster than they could tally and all of Chicago’s off-duty firefighters were ordered to report for duty. As half of the city’s apparatus were directed to a two-mile stretch of Madison Street and more than 2,000 Chicago firefighters were out in the field, mutual aid firefighters and apparatus from suburban communities were called in to cover the empty Chicago firehouses. The fire department even sent fire apparatus from the training academy into the field.

Over the next few days, rioters often prevented firefighters from getting the upper hand in battling the blazes, despite the considerable response by the fire department. One overwhelmed fire chief told the Chicago Tribune “we’re just playing games.” Many firefighters were pelted with bottles and rocks, and some were even under sniper fire. When fire officials asked the city water department to increase pressure within the fire area, vandals opened unused fire hydrants causing the water pressure to drop even further. Supplying the fire engines with gasoline was also a problem, as fuel trucks were obvious targets. As the engines could not pump water without fuel, firefighters had to use civilian vehicles to sneak gasoline cans into the fire area.

In facing these dangers and difficulties, firefighters were forced to adopt a defensive approach to fire fighting. Many companies only focused on keeping the flames from spreading, as they could not effectively extinguish all of the fires. By Saturday, April 6, however, 6,000 National Guard troops had arrived in Chicago to suppress the riots and to protect firefighters in the field. The following day, 5,000 U.S. Army troops arrived to further curtail the rioters and by Monday the riots had dissipated and the fires were extinguished. In the end, only one firefighter was wounded by gunfire, but twelve civilians were killed and 170 buildings were destroyed resulting in millions of dollars in damage and leaving more than 1,000 people homeless.