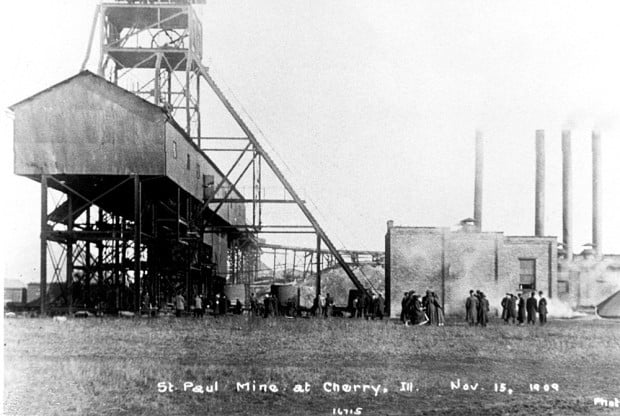 Photo from the Bloomington Pantagraph.

In 1905, the St. Paul Mine Company began mining coal in Cherry, Illinois. Believed to be the largest coal shaft in the United States, the Cherry Mine produced over 1,500 tons of coal a day for its first few years. In addition to being profitable, the mine was also considered to be among the most safe and modern mines, in terms of construction and equipment, operating in the country. To demonstrate their prestige, the St. Paul Mine Company outfitted the entire mine with electric lights and even declared it fireproof.

On Saturday, November 13, 1909, while 480 workers toiled in the mine, a cart carrying hay to feed the sixty or seventy mules that pulled the underground coal cars caught fire. The hay cart had been left too close to a kerosene lamp the workers were using for light after the electricity failed. The fire quickly spread to the support timbers throughout the mine, burning for 45 minutes before any efforts were made to evacuate the workers. While some were able to escape, over 250 miners remained trapped. The immediate civilian rescue efforts that afternoon were successful, as a group of twelve men (including a grocer and a store clerk) descended into the mine six times to rescue miners. The fire was spreading rapidly, however, and the amateur rescuers were killed on the seventh trip down. Shortly thereafter the entire Ladd, Ill., Fire Department arrived but the firefighters were relegated to dumping water down the airshafts when the St. Paul Mine Company officials refused to let them descend into the mine.

Rescue attempts did not begin again until the next day, when Professor R. Y. Williams, a mining engineer with the U.S. Geological Survey, arrived from Urbana where he was stationed at the government rescue operation center at the University of Illinois. Williams brought rescue apparatus with him from the State Mine Experiment and Mine Life Saving Station, including newly developed oxygen helmets and tanks. Over the next week, Williams made numerous trips into the mine while directing the rescue and firefighting efforts. Late on Sunday, November 14, Williams appealed to the state fire service community for fire suppression chemicals, additional hose, and more firefighting apparatus. The following day two special fire engines with over 4,000 feet of hose arrived from Chicago along with dozens of wagons containing fire suppression chemicals. One day later, thousands of more feet of hose arrived from Milwaukee and Chicago, along with Chicago Fire Chief James Horan and eleven handpicked veteran firefighters. By Wednesday the firefighters were pumping 600 gallons of water into the mine per minute, and on Thursday the first firefighters entered the mine.

The rescue efforts culminated on Saturday, November 20, when twenty miners emerged alive, one week after the fire started. Soon after, the St. Paul Mine Company sealed off the mine while the fire continued to burn below the surface. Three months later, the mine was reopened to recover the remains of the lost miners. In the end, 259 miners were dead, leaving 160 widows and 390 children. Public outcry over the disaster and the company’s subsequent abandonment of the families of the victims led Illinois to impose stricter fire and safety regulations on mines and to adopt the state’s first Workmen’s Compensation Act.

This is a short documentary detailing the events of the mine disaster.