There are a multitude of resources that will lead a student to English language materials for the region but some are particularly valuable. This guide will help the student to find those at the UIUC library website, highlighting some of the best.

A Variety of Sources!

EastView is a company that sells books published in Russia, Central Asia, some of the now independent countries, notably Ukraine and also Asia.  It is also a company that produces full text online databases that can be used to locate article published in Russian sources that are available to our users freely.  While they specialize in Russian language materials there is a wealth of English language material here as well​

East View databases are frequently overlooked by those who do not read Russian or Ukrainian.  This is really unfortunate as EastView has a wealth of material in English and it is all full text.  If you are seeking current material with  Russian perspective it should be your first stop.  The search below is on terrorism in Russia.  It is a broad search and not limited other than by dates.  As you can see over 13,000 matches were returned.  This is a search that would certainly need to be refined to find exactly the materials that would be useful.  One of the interesting things about East View is that you don't really have to limit by language.  If you search using Latin characters it largely returns English language materials. 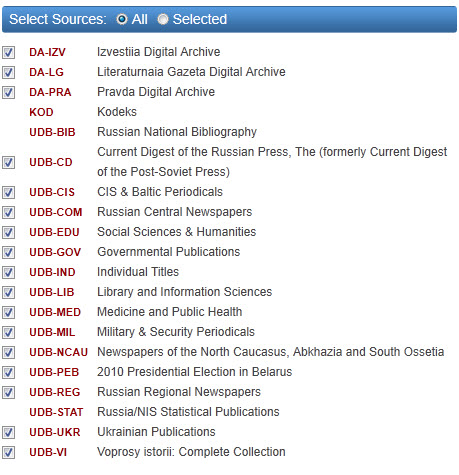