Another of Kazan's theatrical attractions is  The K. Tinchurin`s State Tatar Theatre of Drama and Comedy.  At the MyKazan site you can learn of the story of the theater, as well as other cultural centers of Kazan.  Here is an image from a performance on its stage. 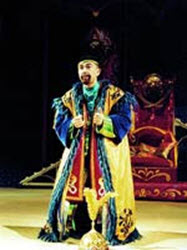 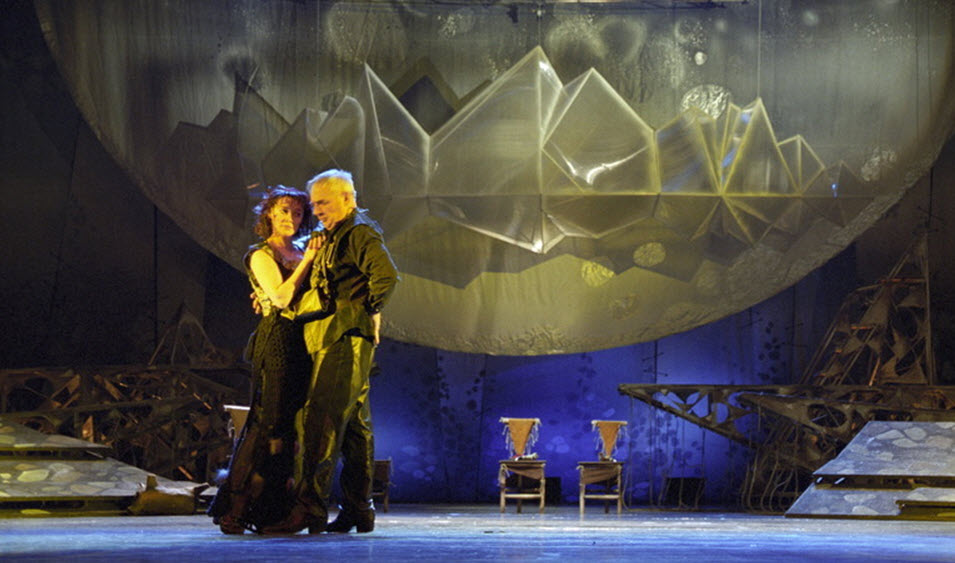 The performance of the Black Felt Cloak at the Galiaskar Kamal theater.

The Galiaskar Kamal Tatar Academic Theatre, founded on December 22, 1906, is the most prominent Tatar theater .  It is located in in Kazan, Russia and is named after the playwright Galiaskar Kamal.  The beginnings of Tatar theater go back to the 19th century, when amateur groups performed in Russian cities, in private homes and venues to the local Tatar population.  At the time the plays were mostly those of Russian and foreign playwrights.  The first public Tatar theatrical performance was presented on December 22, 1906.  The play was staged by a group "Sayar" (“Pilgrim”).  It was led by Gabdoullah Kariyev, who is considered the father of the Tatar theater.  The group eventually evolved into the leading Tatar theater company.  Other Tatar performance groups came to life and in 1922 all Tatar theater companies joined under the directorship of Karim Tinchourin . In 1939 the theater it was re-named after Galiaskar Kamal.

In 1907 the first professional theatrical company “Sayar” (“Pilgim” from Tatar) headed by Gabdoullah Kariyev, who was called ‘father of Tatar theatre” during his lifetime, was formed. It was the start of rapid development and flourishing of young Tatar drama and theatre. The second troupe «Nur» («Ray») was established in 1912, in Ufa by Sahipzhamal Gizzatullina Volzhskaya, the first female actress in the Muslim and Turkic world. In 1915 the third Tatar theatrical company “Shirkat” (“Cooperation”) was formed in Orenburg. In 1922 all Tatar theatre companies joined up under the directorship of  Karim Tinchourin, a renaissance man, a person  of extreme talent and charizma – an actor, dramatist  and play director. In 1926 the theatre was among the first in the USSR to gain the status of “Academic”. In 1939 it was named after Galiasgar Kamal - a prominent dramatist, one of the founders of professional Tatar theatre. During the Soviet times the Tatar Autonomous Republic was not allowed to have its own movie studio, so all the acting and directing talent was channeled towards the theater, which enjoyed great popularity among the Tatar audience.  Today the theater’s repertoire consists mostly of the plays of Tatar playwrights (translation devices are provided for the audience members who do not speak the Tatar language).

To learn more about this national theater in Tatar, English, or Russian, go to their website.

To learn more about Kazan and its art scene, take a look at the Official Tatarstan: Welcome to the Republic of Tatarstan page. You'll find lots of information about theaters and other cools places to visit.