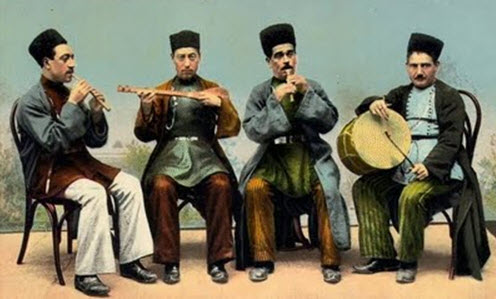 Traditional Tatar music, as well as any other art, has gone through the long way of historical development. Tune and intonation (pentatonic) and rhythmic peculiarities have common features with music traditions of Turkic and Finno-Ugric nations of the Volga region, which allows suppose the connection between lyric Tatar melodies and historic music epos of pagan epoch.

The variety of Tatar music folklore can be divided into songs and instrumental music. Emotional people's life - their joys and sorrows, festivals and customs, everyday life and historic development - all these have found the most colourful expression in nothing but songs. Tatar song art includes ritual (calendar, wedding), historical and lyric songs. In folk music art only solo, traditionally one-voice, singing was developed.

There is no trace of swing and expanse in ancient songs and folk dances of the Tatar girls, which were distinguished for their plasticity and grace, timid gestures and movements. Monotonous movements with small steps in traditional Tatar dance, as well as drawling sad songs, tell about timid isolated life of Muslim girls.Among the most known instruments of Tatar music folklore there were accordion-talianka, kurai (a kind of flute), kubyz (violin), surnai (eastern musical instrument).

Sacred music was a part of musical culture. Islam, being the official religion, influenced not only culture on the whole, but the development of art of music in particular. There is no direct prohibition of music in Koran, it exists in Muslim cult, helping believers perceive the substance of Muslim Holy Book - Koran, which was read drawlingly. Melodies of the surahs (the parts of Koran) were orally conveyed from generation to generation inside the walls of religious educational establishments.

For a sample of Tatar folk music, check out this video.

Sabantuy- Sabantuy is a Tatar and Idel-Uralian summer festival, that dates back to the Volga Bulgarian epoch. At first Sabantuy was a festival of farmers in rural areas, but it later became a national holiday and now is widely celebrated in the cities.

Köräş- Belt wrestling "koresh" is a cornerstone of Tatars' national culture and historical heritage. Nowadays, it is still highly popular in the Volga and Ural regions, as well as among the vast population of Tatar emigrants around the world. Folk festivals "Sabantuy" have been held from immemorial times in the Tatars' dense dwellings throughout the Russian territory. Historical manuscripts dated as far back as 922 AD describe koresh competitions taking place in city squares and being the highlights of the Sabantuy festivals.

Nowruz- Nowruz or Navrez (in Crimean Tatar) is celebrated on the day of the vernal equinox, March 20 or 21 depending on the year. It has been widely celebrated for more than 3,000 years in Central Asia and the Middle East. Today the people in the Balkans, Crimea, the Caucasus, Iran, Turkey and the Central Asian republics participate in Nowruz festivities. Throughout the Turkic world, the arrival of spring has been celebrated under different names: Nowruz, Nevruz, Navruz, Navrez, Nawrez, Nooruz, Noruz, Yıl Başı (New Year), Yeni Gün (New Day), Ulusun Ulu Günü (Great Day of the Nation) and Ergenekon Bayramı (Ergenekon Holiday). In this article, I am using the word Nowruz because it is the frequently used version in English.

Religious Beliefs and Practices. Despite the fact that Islam became the basic religion of the Tatars in Siberia, traditional religious beliefs have been perserved, including a belief in spirits (the so-called masters of localities), in the kukol (family guardians), and in cults of sacred trees, the earth, fire, the sun, and of various animals and birds.

Arts. The most developed aspect of popular art was and remains folklore. There are many tales, legends, proverbs, riddles, and songs. The performance of songs was accompanied by native instruments including a wooden pipe, the kobyz (an instrument with a metal sheet, played with the tongue), the tambourine, a two-stringed violinlike instrument, and the harmonica. "Historical" songs (those thought to have value) were composed and written down on paper. The norms of popular etiquette were reflected in proverbs such as "Don't ask an oldster, ask someone experienced," "He knows who runs along the road, not he who sleeps on the stove," and others. There were not a few raconteurs: from one of them was recorded the Sibertatar variant of the heroic epic Ediger. Distinct Sibertatar intellectuals have contributed to the development of Tatar literary culture—the writing system, books in Tatar using the Arabic script, and poetry.

Folk knowledge played a not insignificant role in Tatar spiritual culture: meteorological observations; medical knowledge; knowledge involving production; knowledge of the habits and anatomy of animals and the behavior of fish; and ideas about geography and the topography of the surrounding localities, of parts of the world, and of stars and planets. People came to the Barabian Tatars from all parts of Russia to be healed by the application of leeches.

In the cities and villages there are many Tatar artistic collectives and popular theaters. Individual folk and professional artists are generally painters and sculptors. The art of decorating houses and domestic objects is developing. The Tatars prefer to embroider patterns on textiles to satin stitching; they also use a free drum stitch. The technique of appliqué is widely used for preparing rugs.

For similar information on the Volga Tatars go here. 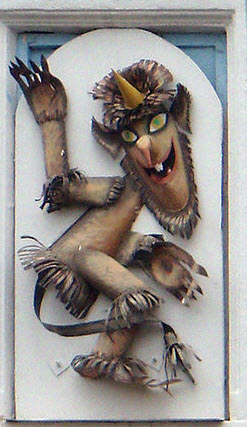 In Tatar folklore the name of Shurale is well-known. This bogeyman is described as a human-like creature with a body completely covered by fur and a horn growing from the middle of his forehead. Shurale (Shoo - rah - leh , pronounced to rhyme with "sure, I lay") has long, bony pointy fingers with which he likes to tickle humans who are unlucky enough to have lost their way in the middle of the black forest (kara urman). Shurale patiently waits behind the trees for his victims. Once the abominable forest creature catches them, he usually tickles them to death.

One of the stories about Shurale sounds like this: "In one village the local residents noticed that one of their horses regularly disappears every night and returns home early in the morning completely exhausted and lathered. They were totally flabbergasted by its mysterious disappearances. One day they decided to ask a local elder for help. The elder recommended covering the saddle of the horse with tar and letting it go. The next morning the people of the village were awakened up by ear-splitting screams. They looked out of their windows and couldn’t believe their eyes: On top of the horse, glued to the saddle there was a scary-looking dark creature that looked like a human being. The creature screamed at the top of its lungs. The village men caught the creature, who turned out, of course, to be Shurale, and killed him."

But the most famous story about Shurale was told by Gabdullah Tukai (Too - kai, pronounced to rhyme with "too high"). Probably, it is the most well-known Tatar poem in the entire 1000 year old history of the Tatar literature. Only Tukai’s other poetic masterpiece, "Oh, My Native Tongue!" can challenge that assumption. All attempts to translate "Shurale" are fruitless and will never succeed. People who are lucky enough to be able to read it in the original are truly blessed. The heart of any Tatar fills with warmth when he reads the magic words:"Nek Kazan artenda bar der Ber avel - Kerlai diler..." (Near Kazan there’s a village, Known to people as Kerlai)

In Tukai’s poem, a young handsome woodcutter decides to go to the forest to get some wood. He prepares his horse-drawn cart and leaves the village of Kerlai late in the evening. Once in the forest, he fells a few trees and puts the timber on the cart. One of the pieces appears to be too big. In order to split it in half, the man puts a wedge into a slit in the log and starts hitting it with his ax. Suddenly he sees a horrible-looking furry creature with long fingers and a horn in his forehead. It is Shurale!

"Hey, young man," says Shurale, "why don’t you put your instruments down and play a tickling game with me?" The boy politely refuses but after Shurale’s demands become more insistent, he finally agrees. But he agrees to it under one condition: that at first Shurale will help him split the log. "Put your fingers into the slit in the log and pull it apart while I drive the wedge in," says the young man cunningly.

When Shurale reluctantly agrees, the young woodcutter, instead of driving the wedge in, suddenly drives it out with a few strokes of the ax. Shurale’s fingers get stuck in the log. The creature begins to scream and yell, threatening the boy with all kinds of punishments and then imploring him - all to no avail.

The young man, without paying the slightest attention to Shurale begins to leisurely prepare his terrified horse for the ride home. When he is finally ready to leave the forest, Shurale asks him desperately: "Oh you, cruel man, tell me at least what your name is, so that I know who to take revenge on!" The young man, before striking his horse with a whip, finally turns to Shurale and tells him with a wink: "My name is Belter!" (literally, "Last year")The next morning, the forest kin of the Shurale gather around him and ask him why he is screaming so loud. The poor creature responds to them: "Oh! My fingers! Last year! (belter)" The other shurales start laughing at the hapless relative and scolding him: "You fool! Why are you screaming now if the accident happened last year?" 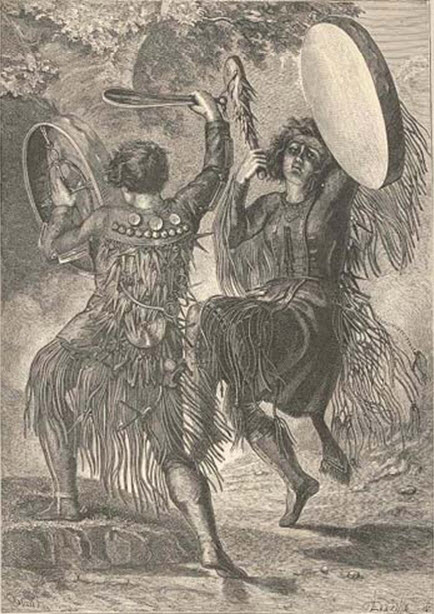 Today the dominant religion among Tatars is Islam, but in the past shamanism had a very strong influence. For a glimpse of how the 1930s anthropologists viewed the role of shamans in Central Asian cultures you may find this article of interest.