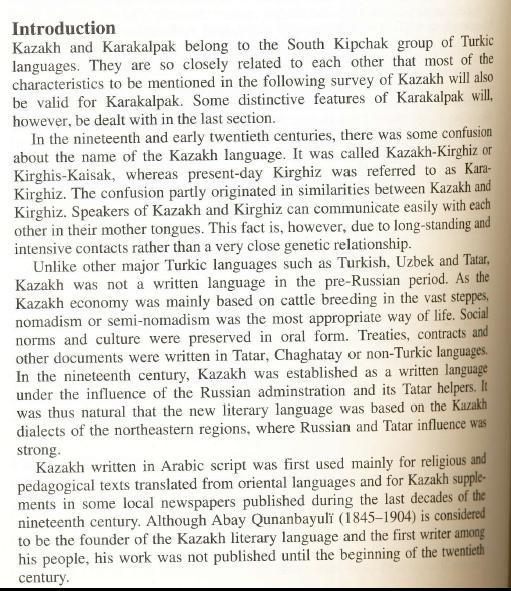 Kazakh is a member of the Kipchak branch of the Turkic language family. It is spoken mainly in Kazakhstan, China and Uzbekistan and also in Iran, Mongolia, Turkey and other countries. In 2009 there were about 12.8 million speakers of Kazakh: about 10 million in Kazakhstan, 1.25 million in China, almost 1 million in Uzbekistan, and about 100,000 in Mongolia.

Kazakh was first written with the Arabic script during the 19th century when a number of poets, educated in Islamic schools, incited revolt against Russia. Russia's response was to set up secular schools and devise a way of writing Kazakh with the Cyrillic alphabet, which was not widely accepted. By 1917, the Arabic script was reintroduced, even in schools and local government.

Since 2006, as part of a modernization program, the government of Kazakhstan decided to replace the Cyrillic alphabet with the Latin alphabet. The switch to the Latin alphabet official started in October 2017, and is expected to be complete by 2025.

The Kazakh government has decided that the entire country will switch from its current Cyrillic alphabet to a Latin alphabet. This BBC article provides some wonderful in sight into the logistics of such a change, as well as a few wonderful graphics, such as the one seen below: