Hospitality is an important part of Kazakh culture. A Kazakh host will feel offended if a guest does not have some refreshments, or at least a cup of tea. Refreshments might include dried and fresh fruits (grapes or melon), nuts, cakes, or baursaks (a type of bread). They also may be offered some fermented kymyz (milk from a female horse) to drink. Tea and kymyz are served in a piala (Asian teacup) or a wooden bowl. A guest is usually offered a place of honor at the table.

If invited to a person's yurt (tent-like dwelling), diners step outside to wash their hands before a meal. A prayer is said and the guest is served first. Eating is usually done with the right hand, or a knife and fork. Tea is usually served after dinner. Once the adults have eaten, children eat the leftovers.

A unique custom in Kazakhstan is the dastarkhan , a feast for visiting guests and special occasions that includes meat dishes and dairy products. Appetizers may be smoked or boiled meat, zhuta (pasta stuffed with pumpkin or carrot), and flat cakes. Vegetables, sorpa (rich broth), and shubat (a milk drink) may be offered next. For the feast, an entire animal, usually a sheep, is slaughtered and the oldest member of the family carves the head and serves the family. This is considered an honor in Kazakhstan. Besbarmak is the animal's meat, boiled, and served on a platter with dough that has been boiled in broth. Different parts of the animal symbolize traits desired by those eating them. For example, children are often served the ears as a symbol to listen better. The person who receives the eye should seek wisdom, and a tongue means that a person should be more expressive.

National Foods of the World offers a recipe for the National Dish of Kazakhstan: Beshbarmak.

The archive of an old website, Zheurik.kz provides a nice insight into Kazakh restaurant life.

Kazakhstan's food and traditions are a reflection of our country's unique ethnic and religious composition. With people of more than 100 ethnic groups practicing 46 different religious teachings, one can only imagine a wide variety of cuisine art and cultural rituals that form the rich mosaic of our everyday life.

What's most remarkable is that such diversity brings to life the intertwining and mutual enrichment of cultures and cuisines.

People of all ethnicities come to enjoy the traditional Kazakh dish 'beshbarmak' , the pilav (the traditional oriental dish with meat and rice), Russian pelmenis and blinys, Korean spicy salads and the noodles of the Uighurs.

Our people welcome their guests to try their food and to enjoy our hopitality.

It is common in our traditions to welcome guests to their houses, to treat them to our best cuisine and, generally, to treat each other with genuine respect and appreciation. 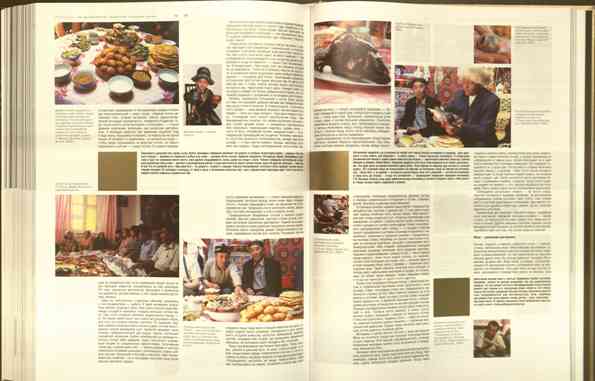 Kazakh nomads migrated from region to region, depending on available water and pastures for their livestock. They also produced goods that they traded for grain, vegetables, and fruits at markets in the more settled cities of south Kazakhstan. Cone-shaped tents called yurts were their homes, which were easy to set up, dismantle, and carry.

The nomadic way of life began to change in the 1800s, when the Russian Empire conquered the Kazakhstan region. Many Russians settled in the area, which greatly reduced the grazing lands needed for herds. Kazakhstan became part of the Soviet Union in 1922, and Kazakh nomads began to settle in rural villages or cities. There are, however, some Kazakhs who still live the nomadic way of life, moving with their yurts and herds to summer pastures every year.

The Silk Road was a major trade and travel route that ran through present-day Kazakhstan between Asia, the Middle East, and Europe in ancient times. Present-day Kazakh cuisine includes some Uzbek, Russian, and Korean foods mainly found in cities. Traditional Kazakh foods reflect the nomadic peoples and also Middle Eastern influences. Horsemeat and mutton are the most common foods. Middle Eastern methods of preparing and seasoning rice, vegetables, kebabs (skewered meat), and yogurt have been added. Although Kazakh cuisine has some Russian influence (and viceversa), the Russian people living in Kazakhstan have generally retained their native culture and cuisine. A traditional Russian meal includes meat, potatoes, dumplings, and vegetables. Cold dishes called zakuski (smoked fish, pickles, or onions) may be served first. Borscht (beet soup) may be eaten next, followed by meat or fish with bread. Favorite drinks such as black tea is part of Kazakh and Russian custom. Russian food is found in abundance in northern Kazakhstan and larger cities.

(Source: here)
During their time in the Soviet Union however, the Turkmen, Kazaks, and Kyrgyz were forcefully settled into typical Soviet apartment blocks. Separated from the land and their herds, the newly urbanized nomads adopted many Russian or Uzbek foods and customs. Kazaks and Kyrgyz claim as national dishes beshbarmak and kumys (fermented mare's milk). Horsemeat sausage (kazy), when served with cold noodles, is called naryn. Barley, wheat, and millet are quite common; from them comes dzarma, fermented barley flour. Boso (fermented millet), and boorsak, a ritual dish made from small pieces of deep-fat-fried dough, are also found in Tibet by the same name. When the Uighurs and Dungans fled China in the late nineteenth century, they brought laghman, other noodle dishes, and spicy peppers that were quickly embraced by the Kazaks and Kyrgyz.
(Source: Glenn R. Mack "Central Asia." Encyclopedia of Food and Culture. Ed. Solomon H. Katz. Vol. 1. New York: Charles Scribner's Sons, 2003. p133-137.