Publisher Notes: "Index Islamicus is an international bibliography of publications in European languages covering all aspects of Islam and the Muslim world, including history, beliefs, societies, cultures, languages, and literature. The database includes material published by Western orientalists, social scientists and Muslims and contains indexing for 3,470 titles with coverage dating back to 1906. Index Islamicus is produced by Brill Academic Publishers."

Publisher Notes: "Historical Abstracts is an exceptional resource that covers the history of the world (excluding the United States and Canada) from 1450 to the present, including world history, military history, women's history, history of education, and more - essential for libraries supporting upper-division and graduate research. This authoritative database provides indexing of more than 1,800 academic historical journals in over 40 languages back to 1955."

Publisher Notes: CSA Sociological Abstracts abstracts and indexes the international literature in sociology and related disciplines in the social and behavioral sciences. The database provides abstracts of journal articles and citations to book reviews drawn from over 1,800+ serials publications, and also provides abstracts of books, book chapters, dissertations, and conference papers. Records published by Sociological Abstracts in print during the database's first 11 years, 1952-1962, have been added to the database as of November 2005, extending the depth of the backfile of this authoritative resource. 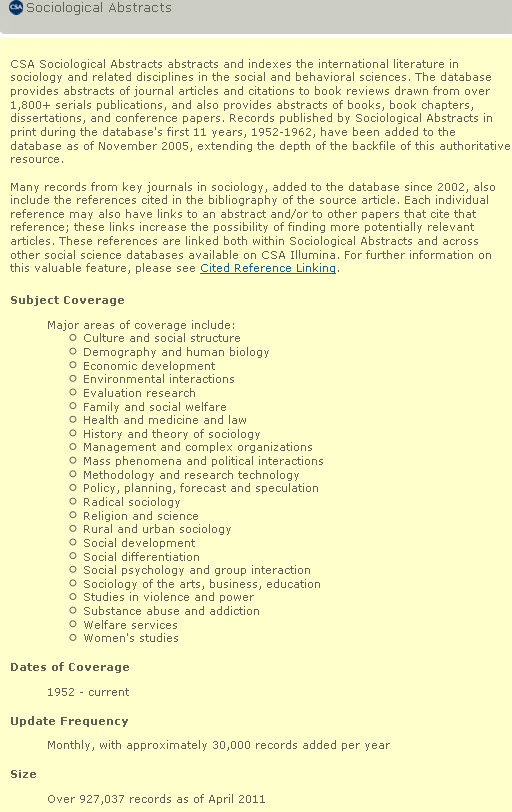 Publisher Notes: CSA Worldwide Political Science Abstracts provides citations, abstracts, and indexing of the international serials literature in political science and its complementary fields, including international relations, law, and public administration / policy. The database is building on the merged backfiles of Political Science Abstracts, published by IFI / Plenum, 1975-2000, and ABC POL SCI, published by ABC-CLIO, 1984-2000. Over 1,700+ titles are being monitored for coverage; of these, 67% are published outside the United States.