Below are links to related subject searches in the UIUC Library Catalog. Some results are physical items and are only available by request.

"Let's do the Time Warp again!"  This year marks the 45th anniversary of the classic musical comedy horror film "The Rocky Horror Picture Show", produced by Lou Alder.  This film was adapted from the 1973 musical "The Rocky Horror Show" written by Richard O'Brien.

Aside from being the longest running theatrical release in history, "The Rocky Horror Picture Show" is also famous for its audience interaction and live cast simultaneously acting out the film during screenings.

Due to COVID-19, The Rocky Horror Picture Show is running mostly in drive-in theaters in 2020.  This way, audience members can still enjoy the film, cosplay as their favorite characters and shout familiar callbacks.

This exhibit contains resources about the 1973 musical stage show and the 1975 film.  Examples include the film and stage show's influences on modern audiences, interviews with the main cast and alludes to Richard O'Brien and Lou Adler's additional works. 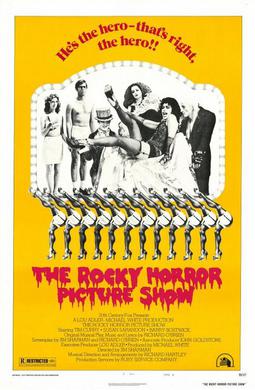