Below are links to related subject searches in the UIUC Library Catalog. Some results are physical items in MPAL and are only available by request.

The sitar is one of the most popular musical instruments of India and often the dominant instrument in Hindustani music.  The unique sound of the sitar is due to its construction, most notably the resonant gourd-shaped body with five melody strings, two drone strings and up to thirteen sympathetic strings beneath the frets.  Sitar music often follows a raga--a melodic framework of notes designed for improvisation.  The musician can rearrange notes in a raga to evoke different emotions from the audience.

Two schools of modern sitar playing are the Ravi Shankar and Vilayat Khan, named respectively after their masters.   Shankar was responsible for bringing Indian Classical music to the west. Khan invented gayaki ang, a method of sitar playing to make the instrument mimic the human voice.

This exhibit contains various examples of sitar performances, including Indian classical music, traditional ragas and some modern, improvised sitar compositions with Eastern and Western instruments.  Some areas in this exhibit highlight the aforementioned sitar masters Ravi Shankar and Vilayat Khan. 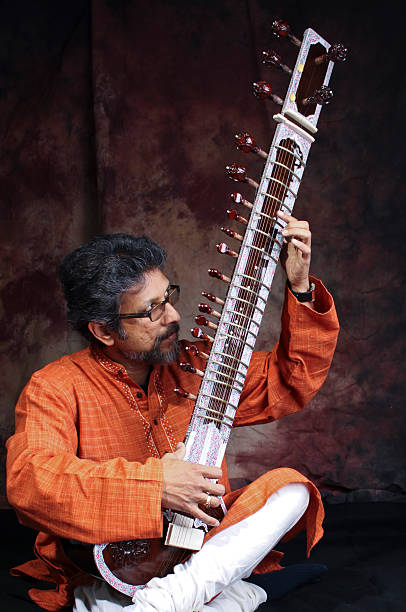