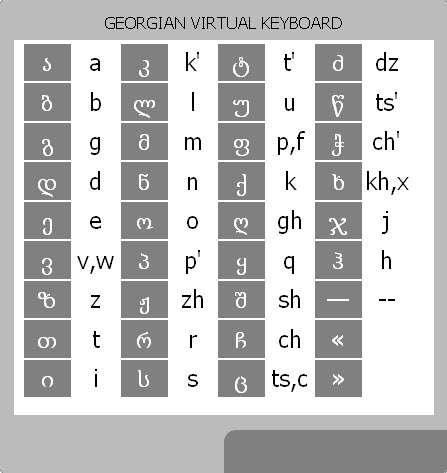 The project GE.TRANSLIT.CC has been created to support both international Georgian community spreaded around the World and people who learn Georgian. Our online Georgian converter is a powerful and easy to use tool at the same time. The transliterator is optimized to consume less resources and perform the translation faster than most of the other similar Web applications.

Eventually the two older alphabets fell out of use and Mkhedruli became the sole alphabet used to write Georgian. However, in the writings of a linguist called Akaki Shanidze (1887-1987) and in works written in his honour, letters from the Asomtavruli alphabet are used to mark proper names and the beginning of sentences. Shanidze's attempt to popularise such usage met with little success.

The first printed material in the Georgian language, in the Mkhedruli alphabet, was published in 1669. Since then the alphabet has changed very little, though a few letters were added by Anton I in the 18th century, and 5 letters were dropped in the 1860s when Ilia Chavchavadze introduced a number of reforms.

This guide to Georgian language and culture is designed for students and instructors alike.  There are five main sections to this website: Alphabet, Grammar,  Literary Tradition, Folklore, and Anthropology.   In addition to textual content, Prof. Shorena Kurtsikidze has included a slide show section.  For example: Tbilisi Historic Pictures.  Enjoy this great contribution to language learning.

Note: copyright statement. Contact the compilers for any reproduction inquiries.