Resources for the Study of the Macedonian Language: Folk Culture

Supporting materials for students in their first year of studying Macedonian 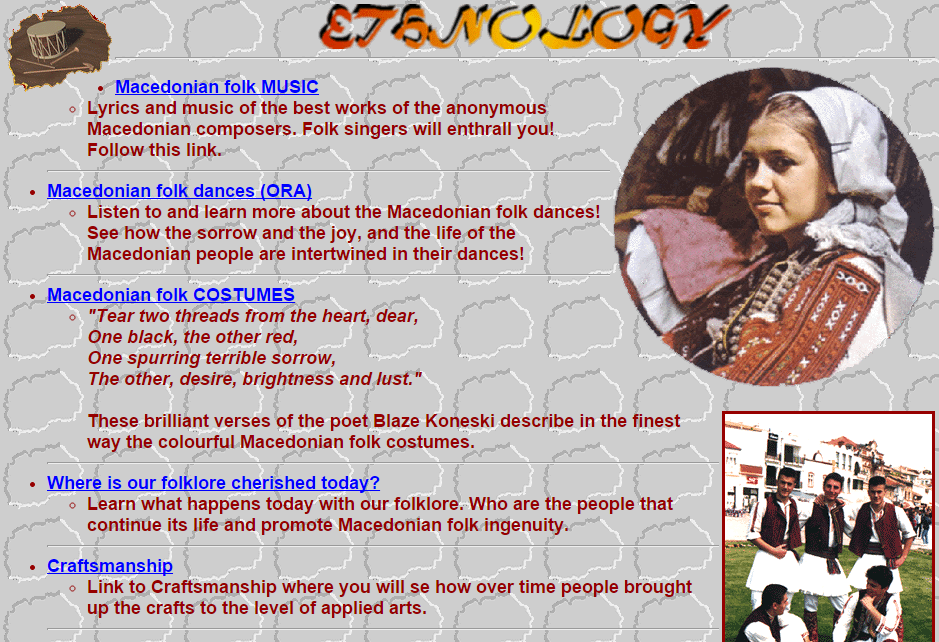 The above website is a great place to begin your research on any number of topics about Macedonian Folk Culture including Macedonian folk music, folk dances, costumes, current folklore practices, and craftsmanship.

Each year the village of Galicnik hosts a traditional Macedonian wedding in the beginning of July, and is always held on St. Peter's Day. This traditional wedding is a remainder of the past, when Galicnik had 1600 people living in 800 houses. The village of Galicnik which extends on the falls of Mount Bistra is 110 km away from the capital city of Macedonia. The sound of drums and trumpets echoes through Mount Bistra and the valley of the river Radika. In attendance are the people from Galicnik and some 7,000 guests from the Republic of Macedonia, the U.S.A, Germany, Austria, Italy and some other countries. Each tradition and ritual was followed with great interest and attention. All of this was captured on photo and film cameras.

With the arrival of the drums, the mother in-low dances the â€žSvekrvino oro" the Traditional Mother in-law dance.
In the front yard of the groom's house, girls and boys dressed in traditional clothes which originate from Galicnik with flowers they decorated the "Barjak" which was then put on the house.
The older people from Galicnik danced the "Hard Dance" (Teskoto) , which is a symbol of the people in this region. While dancing, they were reminded of the hard past, of the fortune seeking, of the weddings and the happiness. A few tears rolled down their wrinkled cheeks in grief for the past and happiness that Galicnik still has.

On the second day at the wedding the rituals continued. On this day the groom, together with his closest relatives, invite the Godfather to attend the wedding. Before the wedding column was formed, the groom was shaved and few traditional songs were sung: " Nejke zetot berber da go brici, tuk mi saka mlad pobratim...". In the moment when the the in-laws were on their way to the bride they carried out the custom "Bodinjanje" where they race who will be first to get to the brides house.

Many customs were carried out there too: looking through the ring, giving presents, carrying the dowry and taking the bride.