April 12, 2011, marked the 50th anniversary of manned space flight. Cosmonaut Юрий Алексеевич Гагарин (Yuri Gagarin) made his 108-minute long historic flight on April 12, 1961, at the height of the Space Race between the Soviet Union and the United States.  This secured Gagarin's place as the first person in space.  Alan Shepard of NASA followed close behind, with his flight into space ocurring on May 5, 1961.

Just 2 years after him, Валентина Владимировна Терешкова (Valentina Vladimirovna Tereshkova) followed as the first woman in space on June 16, 1963 - beating Sally Ride by 20 years, who did not go up until June 18, 1983.

Astronomy Picture of the day (APOD), a website which posts a different image of the cosmos every day with an explanation written by professional astronomers, is available in English as well as in Russian.

On their website, the U.S. Department of State Office of the Historian, has posted many documents and records reflecting the nature of U.S.-Soviet relations, and events of the Cold War.

The Internet Public Library (IPL2) has links to many online resources, as well as reading suggestions available on many different topics.  By doing a search for "Russia" 183 results ranging in scope from current newspapers to historical and cultural information.

The information found on the World Factbook page for Russia:

Founded in the 12th century, the Principality of Muscovy, was able to emerge from over 200 years of Mongol domination (13th-15th centuries) and to gradually conquer and absorb surrounding principalities. In the early 17th century, a new Romanov Dynasty continued this policy of expansion across Siberia to the Pacific. Under PETER I (ruled 1682-1725), hegemony was extended to the Baltic Sea and the country was renamed the Russian Empire.

During the 19th century, more territorial acquisitions were made in Europe and Asia. Defeat in the Russo-Japanese War of 1904-05 contributed to the Revolution of 1905, which resulted in the formation of a parliament and other reforms. Repeated devastating defeats of the Russian army in World War I led to widespread rioting in the major cities of the Russian Empire and to the overthrow in 1917 of the imperial household. The Communists under Vladimir Lenin seized power soon after and formed the USSR.

The brutal rule of Iosif Stalin (1928-53) strengthened Communist rule and Russian dominance of the Soviet Union at a cost of tens of millions of lives. The Soviet economy and society stagnated in the following decades until General Secretary Mikhail Gorbachev (1985-91) introduced glasnost (openness) and perestroika (restructuring) in an attempt to modernize Communism, but his initiatives inadvertently released forces that by December 1991 splintered the USSR into Russia and 14 other independent republics.

Since then, Russia has shifted its post-Soviet democratic ambitions in favor of a centralized semi-authoritarian state in which the leadership seeks to legitimize its rule through managed national elections, populist appeals by President Putin, and continued economic growth. Russia has severely disabled a Chechen rebel movement, although violence still occurs throughout the North Caucasus. 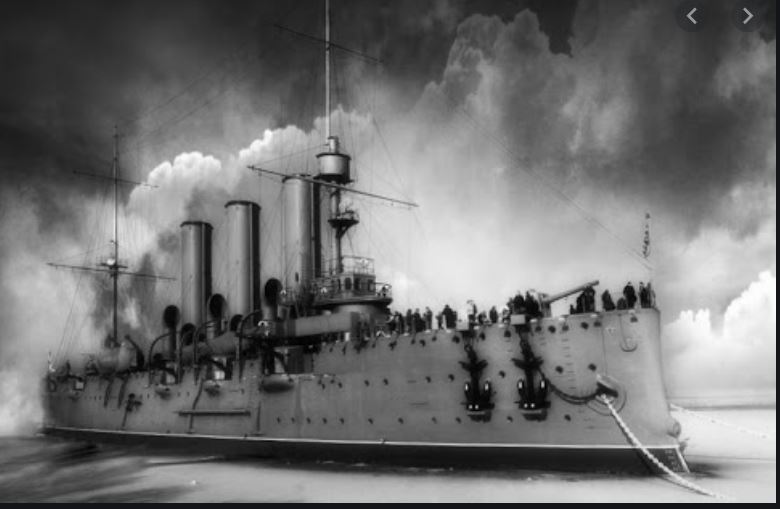 Cruiser Aurora anchored in Saint Petersburg Harbor. It was a blank shot fired from this ship that signaled the assault on the Winter Palace and  launched the October 1917 Revolution. 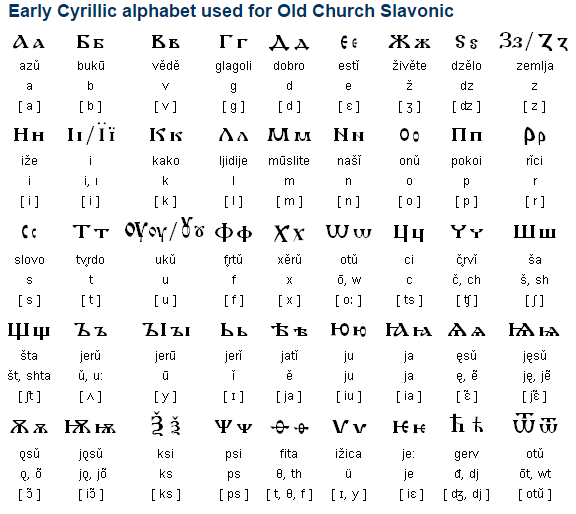 This is what the Cyrillic alphabet evolved from.  Here is more information on the Old Church Slavonic.