The Russian Coat of Arms is described by the Embassy of Russia to the United States as "a state symbol two-headed eagle first appeared in Russia, those times Moscovia, in the XV-th century. It came from Visantium with Sophia Paleolog, member of the last Visantium Emperor dynasty, who became the wife of Ivan III, the Great Duke of Moscow.

Two-headed eagle remained the symbol of Russian Monarchy and Russian State for more than four hundred years, till the October Revolution of 1917, and regained it's status in 1993 according to the order of President Boris Yeltsin of November 30, 1993.

There are different interpretations of this symbol. The most common version says that two heads of the eagle symbolize that Russia consists of two parts - European and Asian, and they are of equal importance for the country.

The State insignia survived some changes during the pre-revolutionary history of Russia, though these changes were not too significant. When the old Rurik dynasty ended in the XVII-th century and Romanovs came to power, the two-headed eagle remained as the symbol of Russia, though three crowns were added above the eagle. They were to embody the unity of three nations - Russian, Ukrainian and Belorussian."

Here is a description of the Russian flag. 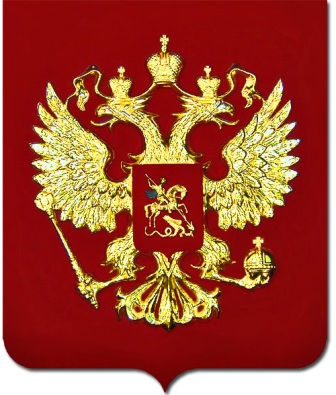