A few ways to keep informed

In addition to online catalogs available from many of the region's leading libraries, patrons can find useful a myriad of resources placed online for general public access by specialized institutions.

The Digital Library of Slovenia is one of the leaders in the Balkans.  It was begun in 1996 with the digitization of important materials from the Slovenian National and University Library. The first ten years were slow going compared to recent achievements: beginning in 2006, a significant speed has been attained in digitization. Patrons now have access to more materials as new partners have joined the National and University Library including the University of Ljubljana, the Slovenian Research Agency and the National Education institute. 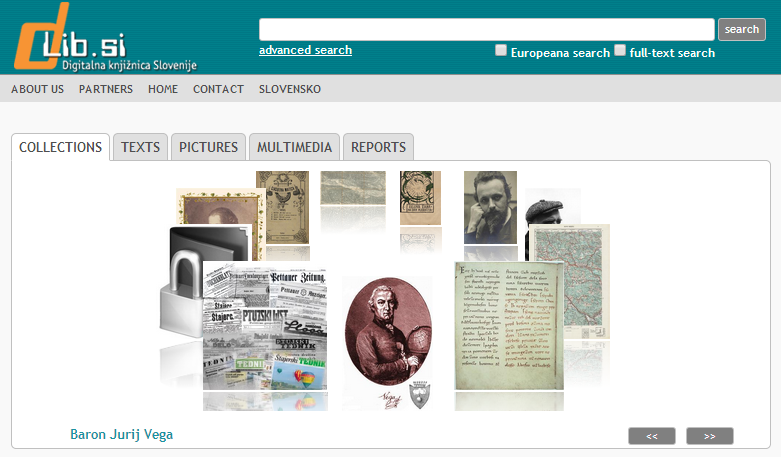 For Serbia, the digital content portal is know as "doiSerbia," short for Digital Object Identifier Repository. So far, only the National Library and KoBSON are participating, but this will likely grow. In addition to this portal, the National Library together with the University of Belgrade have partnered with the European Library to place numerous portals online for access to special digitized collections of materials, such as newspapers, old and rare books, photographs, engravings, maps, and more. These are all accessible through the European Library portal for Serbian materials, available here.

Perhaps no other nation in the Balkans has been as active in creating digitial ibraries than Croatia. One of the leading online collections in Croatia is the Digitized Heritage collection in the National and University Library, which contains digital reproductions of old books, manuscripts, maps, sheet music, graphics and drawings from The National and University Library's special collections. 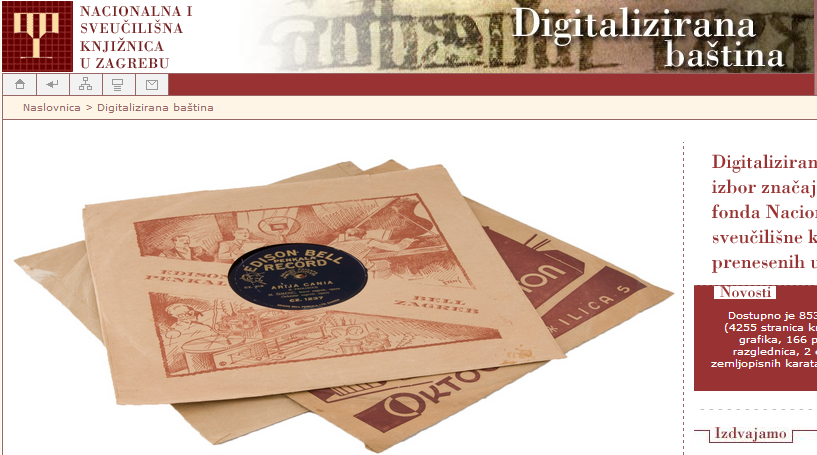 The Croatian Web Archive, also compiled and maintained by the National and University Library in Zagreb, is a collection of selected material harvested from the Internet. The Archive's mission is gathering and long-term preservation of Internet publications as part of the Croatian national heritage. 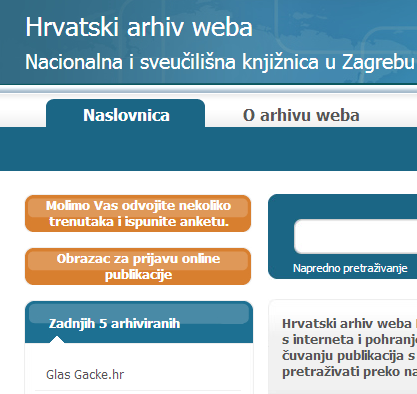 A third digitization project underway at the National and University Library in Zagreb is the collection for Old Croatian Journals. Old Croatian Journals is the portal providing access to digitised Croatian journals from the collections of National and University Library in Zagreb and other heritage institutions in Croatia. The aim of the Portal is to enable access of the oldest Croatian scholarly and professional journals to the cultural and scholarly community as well as to the general public. 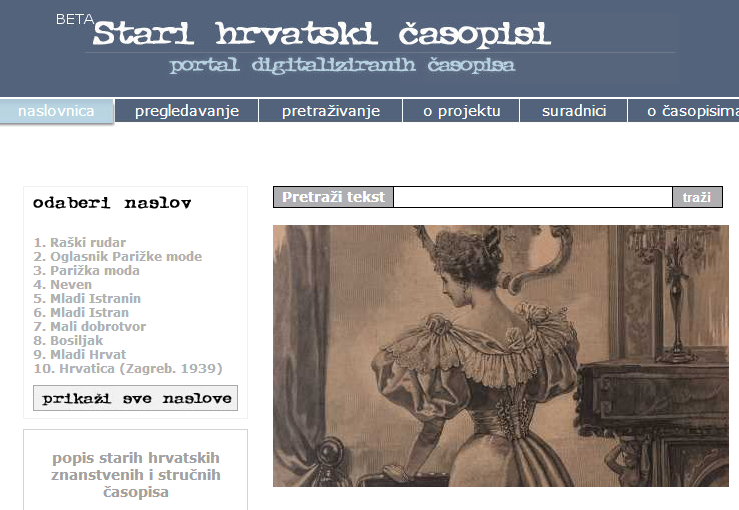 The Digital Academy Repository, or DAR, is an OAI-PMH compatible repository of digitised research theses (1880-1952) and digitally born theses (from 1986 on) from the University of Zagreb and other Croatian universities. The aim of the repository is to enable ingestion, management and access to digital theses and other academic resources in digital form. 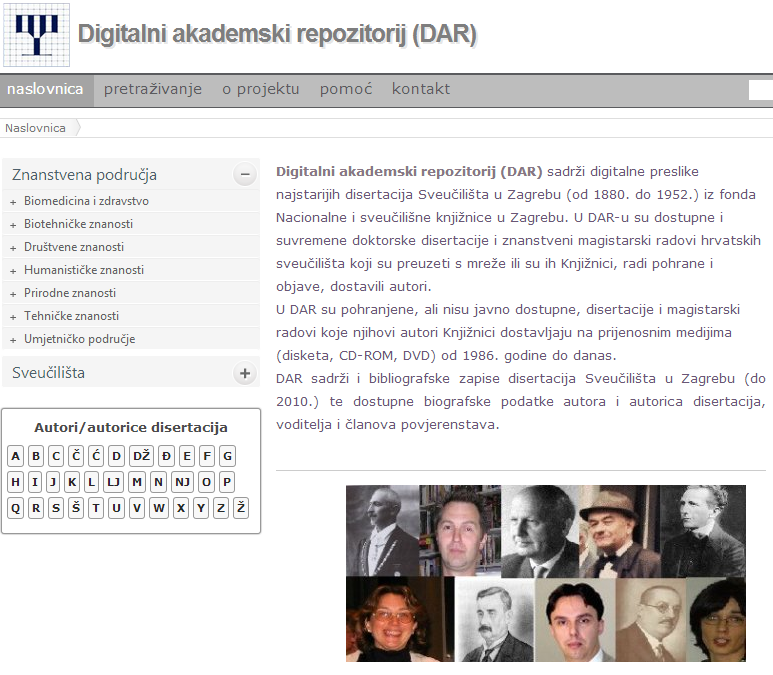 Digital Library of Macedonia, dLib.mk provides easy access to some of the Special collections kept at the National and University Library “St Kliment Ohridski” – Skopje, Republic of Macedonia among which is the Archeographic collection which includes more than 200 manuscripts handwritten on paper and/or parchment dating from 13th to 18th century. Then, the Collection of old printed and rare books, which includes the first printed books with the appearance of the printing houses (incunabula and postincunabula), books written by the Macedonian enlighteners, writers and printers, that is publishers. The collection of rare periodicals contains newspapers and journals that follow the development of Macedonian national thought, having often been a medium where they it could be expressed. 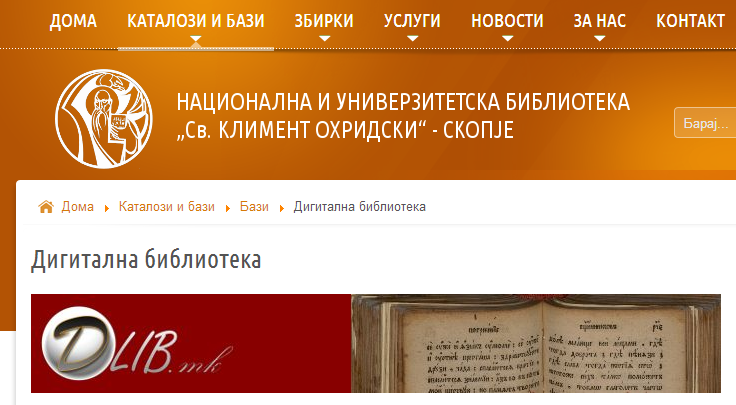 The digitial library of Montenegro, or the Portal Montenegrina, is available in Montenegrin, English and Russian, although only the first is updated on a regular basis and offers the full extent of the digitization that is proceeding among the country's libraries, particularly the Đurđe Crnojević National Library in Cetinje. As with other national digitization programs across the Balkans, tremendous progress is being made in an otherwise relatively new venue. Some of the notable collections available through the portal already include the collection of historical photographs, and the collection of historical documents as well. In some of the collections, not the entire text is available online, but rather some of the matieral only. 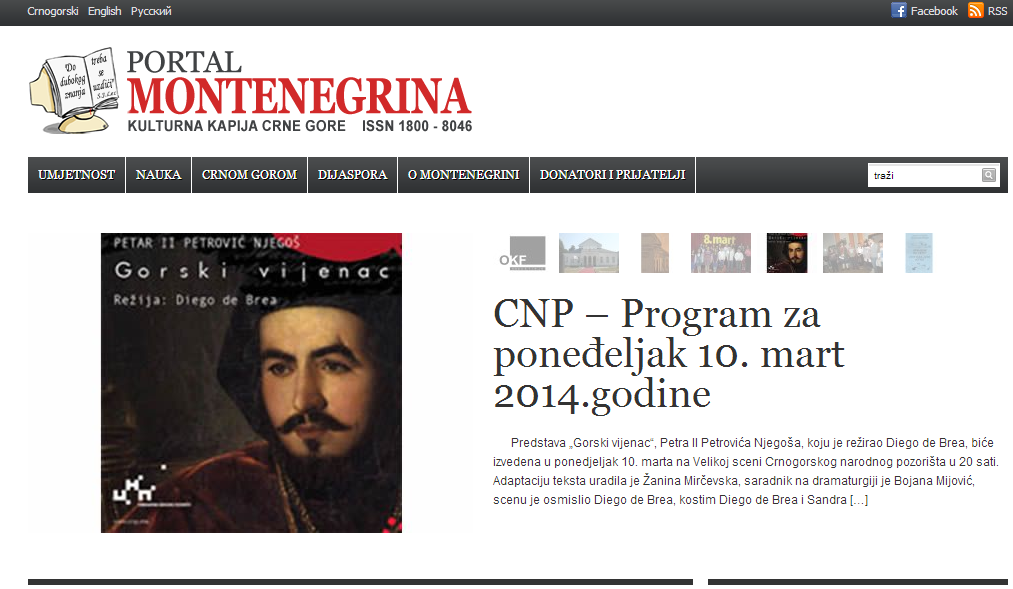 The project to create the digital library of Bulgaria is also underway and the chief institutional architect is the National Library Kliment Ohridski. The collection available online remains quite limited, focused primarily on important national historical documents from pre-modern times, most notable manuscripts and documents that are considered foundational for the Bulgarian nation and that are most in need of digitization for preservation purposes. Access to the current collection is available here.

Another national library system that has been incredibly active in digitizing materials over the recent past is Romania's. The leading joint online portal for accessing full-text resources in Romanian is the Digital Library of Romania in partnership with the Metropolitan Library of Bucharest, known in Romanian as the Bucharest Digital Library. In 2011 the Metropolitan Library launched the most ambitious Romanian digital library to date giving users three million pages of scanned books. Soon after, the Dacoromania project was begun in conjunction with general digitization, focusing on the preservation of old Romanian books and thereby Romanian cultural heritage.

From this site patrons can access to additional databases, including newly available OPACs such as the one to the National Digital Library, pictured below. The number of digitized documents accessed by this search is not yet very large, but it is growing everyday. 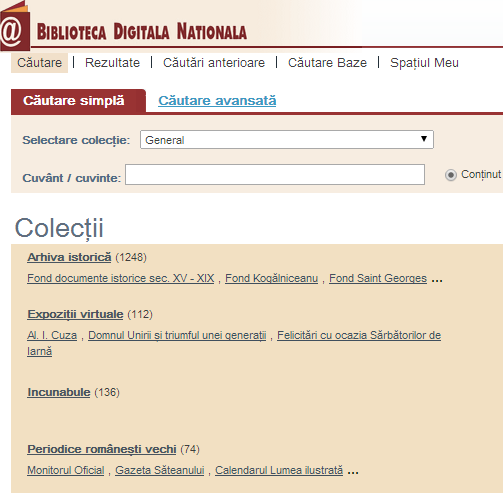