As with some other Eastern European databases and catalogs, failure to use diacritics in C.E.E.O.L. can have a major effect on search results. For example, a search for the term "székely" (a Hungarian ethno-historical group) in the full-text Google scholar window yields over 700 results, while a search for "szekely" (without the diacritical mark over the first "e") yields a bit over 200 (some different) results. This difference in fact represents an improvement in the search interface's recognition of non-diactritic letters--the difference used to be more significant.

For assistance with enabling and using diacritics on your computer, see the Slavic Reference Service's "Fonts & Keyboards" webpage. 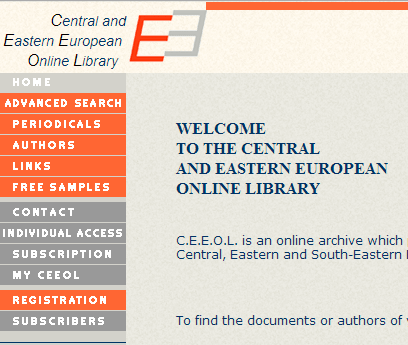 By the description of the organization's own supporters, "C.E.E.O.L. is an online archive which provides access to full text PDF articles from 1,069 humanities and social science journals and re-digitized documents pertaining to Central, Eastern and South-Eastern European topics. C.E.E.O.L. is the result of 10 years of work by the Frankfurt Eastern/Western European Cultural Center Palais Jalta. During the 1990's, the annual book fairs in Frankfurt offered the most appropriate opportunities for networking among publishers, as well as for discussions and all kinds of public events. In 1998, the company QUESTA.Soft GmbH arose from the Cultural Center. From the very beginning, the company started to build-up the technical and logistical basis for the future operations of C.E.E.O.L. The cooperation between PALAIS JALTA and QUESTA.Soft has mirrored the political and cultural, along with the economic intentions of C.E.E.O.L." This number, focusing on leading humanities and social sciences journals in and/or about the region, is quite a bit more than just a few years ago, indicating how quickly this database has been growing.

"The project's primary concern is to make documents available to a public which can currently only gain limited access when using traditional channels or who have been previously unaware of the existence of these documents." To accompany its growth and make searching easy and powerful, the project has joined forces with Google to provide state-of-the-art search technology for its collection. Because it is full-text, patrons have unprecedented ability to search the entire collection by subject and keyword in the Google scholar interface. 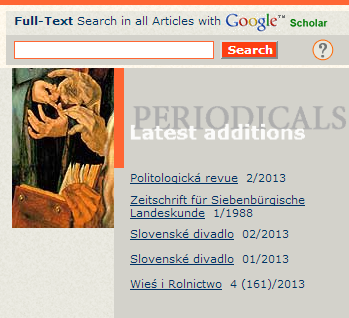 As of March 3rd, 2014, CEEOL contained 236,269 full-text articles with more than 2.6 million scanned pages representing 17,283 issues from 1069 periodical titles. This is roughly a quadrupling of content size from just six years ago. CEEOL is continually adding more journal titles.

Lists of periodicals whose full text is included in CEEOL can be viewed on a country-by-country basis by clicking on "PERIODICALS" option in the menu. Patrons can also search by subject, which was not always possible. "Show details" to the right of each journal title leads immediately to more information about the journal and then to issue-by-issue links to all available articles from that journal.

C.E.E.O.L. offers a number of other features, including country-by-country lists of authors as well as a substantial (if somewhat dated) webliography on a number of aspects of Eastern Europe in its searchable "LINKS" pages. It seems less time has been committed to this links interface, as searching is less user-friendly and many more recent sites are not included. There is a means to contribute new sites to the editors, so they are making the effort.

While C.E.E.O.L.'s various search options do not function as well as they might, the extensive full-text access it provides will be of considerable value to scholars of Eastern Europe.