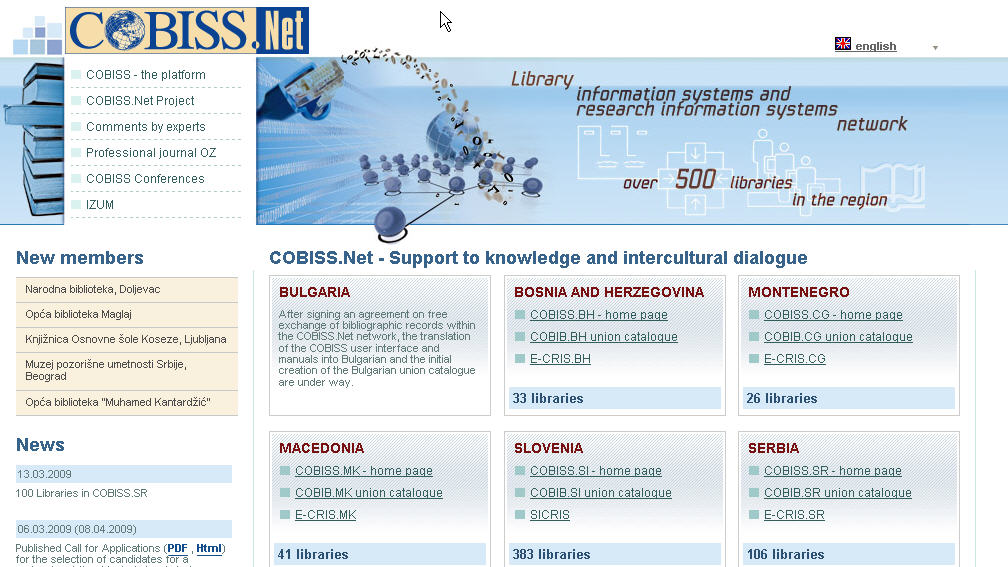 The COBISS system was designed in 1987 by the Institute of Information Science (IZUM) in Maribor (Slovenia), which established itself as a development actor of library information systems in the former Yugoslavia. Following the social changes in the 1990s, a wider community of countries in South-East Europe accepted IZUM as such. In 2003, an Agreement was signed on the establishment of the COBISS.Net network and the free exchange of bibliographic records that are created within the autonomous library information systems of the participating countries. Cobiss now links the library systems of Slovenia, Serbia, Macedonia, Bosnia and Herzegovina, Montenegro, Bulgaria and Albania. All these systems are interconnected into the COBISS.Net regional network. In Kosovo, preparations are being made for the implementation of the COBISS system. An open invitation for cooperation has been offered to Croatia, but so far no libraries have joined. So far, over 400,000 bibliographic records have been exchanged between the systems. At the end of 2013, there were more than 9 million bibliographic records in the seven COBIB shared databases (union catalogs); and there were more than 20 million bibliographic records in the local databases of 734 libraries (although most of these are in Slovenia and the rest are in Serbia).

At its best, Cobiss will provide information on a particular researcher, their current scholarly interests and research projects and compile  a bibliography of their writings. Many of these catalogs are still under development, especially for Kosovo and Albania but to some extent also for Bosnia-Herzegovina, Macedonia, and Montenegro. For the two that are well developed, Slovenia and Serbia this is an excellent source for finding a compiled bibliographer on a scholar.

The user should be aware however, that what you are getting in most cases is a bibliography that is drawn off the national library catalog.  It is certainly possible to run a search on an author's name and get a list of his/her publications.  Still this is an interesting approach to providing bibliographic materials for researchers.