The University of Illinois in the Cold War Era 1945-1975: The U of I and the Defense Department

The U of I and the Defense Department

During World War II and the Cold War the Department of Defense gave large contracts to American research universities to improve military technology and intelligence.  Technology had been a major factor in winning the war, and the use of the atomic bomb changed the world forever. The four-decade-long arms race between the United States and the USSR continued the pattern of large sums of funds going to educational institutions towards technological and medical advances. The Defense Department often attached strings to their grants, however, such as pressuring universities to purge scientists with past involvement with radical groups and staunchly refusing to grant security clearance to left-leaning scientists.  The military demanded the right to scrutinize curricula of about 200 universities engaged in classified work under military contracts. Although the University of Illinois benefited greatly from this government largess, the relationship was not always a comfortable one, as many officials, professors, and students objected to the university’s status as a partner of the Pentagon. This association became especially controversial during the Vietnam War as the war became more and more unpopular. 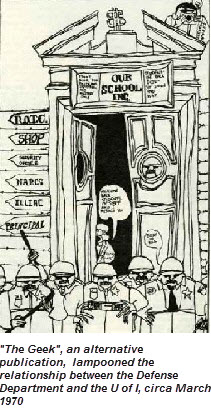 Jerome B. Wiesner, “Can the University Continue to be an Important Source of Scientific Research?”  Proceedings of the American Philosophical Society 115 (Feb., 1971), 22-27.