The Cold War Era at Illinois

At the end of World Wa 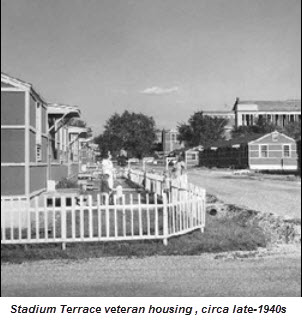 r II, the United States and the USSR became involved in the Cold War.  The U.S. assumed a aggressive approach at home and abroad.  Domestically, many Americans feared not only Communism around the world but also disloyalty at home.  Loyalty programs, anti-subversion laws, congressional investigations and prosecutions rooted those suspected of sedition out of government positions.  At the University of Illinois , the hysteria surrounding communism resulted in infringements on academic freedom, as the discourse was narrowed by fear.

The United States also emerged as the wealthiest nation in the world.  The economy boomed and rising incomes doubled the size of the middle class.  In 1944 Congress passed the GI Bill of Rights.  Under part of the law, the federal government paid a significant portion of tuition for veterans.  Between 1940 and 1960, the percentage of college-age Americans who attended college almost doubled.   University of Illinois enrollment more than doubled, and satellite campuses were opened in Galesburg and at Navy Pier in Chicago .

Although the Cold War era brought repression and conformity, counter trends also emerged during the era that not only affected college students, but were often driven by them.  Energized by the black civil rightsmovement, students and activists began to question and protest racist practices locally and nationally.  By the late 1960s, the civil rights movement had strongly influenced other groups, which embraced its tactics.  Many protesters denounced arbitrary and autocratic higher educational environments, and engaged in acts of disobedience.

The youth movement’s struggles gradually fused with the protests of students who opposed the Vietnam War.  By early 1968, student demonstrations and strikes, which sporadically turned violent, occurred on hundreds of campuses, including the University of Illinois .

The political actions of young Americans had lasting effects.   Higher education became less dictatorial, as curfews, dress codes, and other capricious rules came to an end.  Colleges and universities also became more diverse, as more working class students, racial minorities, and women were recruited and matriculated.  What started as an era of repression turned to one of dynamism.