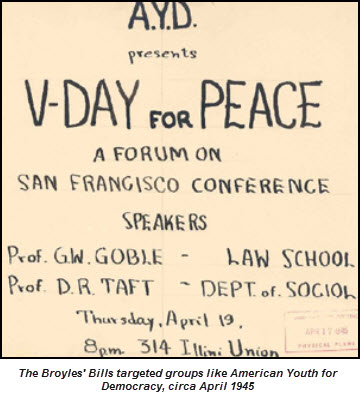 n 1947 State Senator Paul Broyles (R., Mount Vernon) called for a commission to investigate communism in Illinois.  According to Broyles, “The increasing menace of communism is now widely recognized and we must take steps to keep un-Americanism under control.”  The legislature created the Seditious Activities Investigation Commission, or Broyles Commission, and in 1949 it requested a series of measures to rid Illinois of communists, including requiring “non-Communist oaths” from public employees, making the support of communism a felony, and prohibiting communists from holding office.  The Illinois investigations occurred in a time of increasing frenzy over communist infiltration into public life.  J.B. Matthews, a special consultant to the Broyles Commission, went on to be the staff director for Senator Joseph McCarthy’s investigations.  The inquiries lasted into well into the 1950s, with Broyles mainly targeting the University of Chicago and Roosevelt College.  Students and professors from the University of Illinois lobbied against the “Broyles Bills,” charging that they restricted academic freedom.

Ellen Schrecker, Many are the Crimes: McCarthyism in America (Boston: 1998).