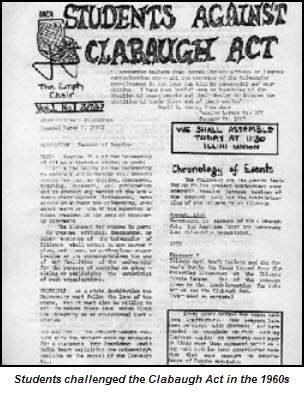 Almost immediatelyafter the end of World War II the Cold War began.  Civil wars broke out in China and Greece, and President Harry Truman established the “Truman Doctrine” in March, 1947, affirming the American policy of global opposition to communism.  Domestically, the federal government initiated “loyalty oaths” for federal employees, and many public and private agencies followed suit soon after.  In Illinois, the General Assembly passed the Clabaugh Act in July, 1947.  The act prohibited any official from the University of Illinois from extending university facilities “to any subversive, seditious, and un-American organization, or to its representatives.”  The sponsor, Rep. Charles Clabaugh of Champaign, said the bill was directed specifically at the American Youth for Democracy chapter on the University of Illinois campus, but would generally stamp out any and all “subversive” organizations on campus.  The bill was passed unanimously in the house and by a 41-1 margin in the senate.

Stanley I. Kutler, The American Inquisition: Justice and Injustice in the Cold War (New York, 1982).