Translations and Translation Studies in the Russian, Eastern European & Eurasian Context: Into Russian

A Brief Overview of the Field, and A Guide to Resources for Identifying Translated Works 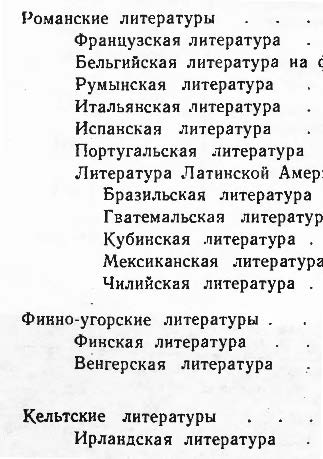 As can be seen in this brief excerpt from its table of contents (above), the scope of B. L. Kandel's Bibliografii︠a︡ russkikh bibliografiĭ po zarubezhnoĭ khudozhestvennoĭ literature i literaturovedenii︠u︡ (Leningrad, 1962 -- UIUC call number Russian Reference 016.8 K131b 1993) is worldwide.  Every bibliography of any significance pertaining to translations of the literatures of the world into Russian at the time of publication is listed here.

Non-Russian literatures in the USSR

If the translations into Russian were reviewed, the reviews are also cited, as can be seen in the example below.  General Russian-language works about the literature of the various nationalities are also cited in a separate "Literaturovedenie" subsection under each language.  Post-1933 translations of works published earlier in the original language are also included, giving the bibliography a broader chronological scope than might otherwise be assumed.  Translations and criticism of the works of the great Kazakh writer Abai Qunanbaiuly (d. 1904), for example, are included, as are those of other "approved" prerevolutionary writers. 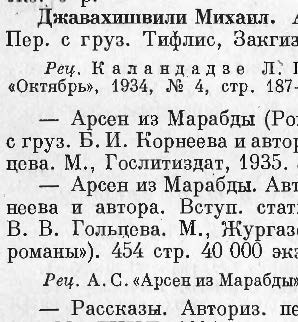 Startsev is a truly essential resource for anyone studying the non-Russian literatures of the Soviet Union (and, to some extent, the Russian Empire), including major literatures such as those of Ukraine, Lithuania, Armenia, Tatarstan, the Yiddish/Jewish community, etc.

Comprehensive resources for a rich and tumultuous period 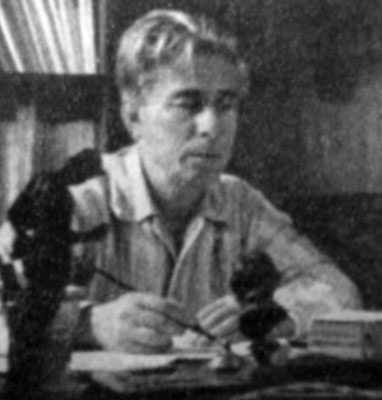 One of many great bibliographers of literary works in the Russian language, N. I. Matsuev (1894-1975) has left behind some excellent resources for identifying works translated into Russian from other (primarily Western European) languages, and, by including contemporary reviews of those translated works in his bibliographies, has provided some means for gauging how they were received in the Soviet Union.  One of his most valuable contributions is a detail-rich five-volume bibliography of Russian-language literature published during the tumultuous period from 1917 to 1953, including thousands of extremely valuable citations to works (and reviews of those works) published before the establishment of Stalin's monolithic, officially-approved Socialist Realism in 1932 (Khudozhestvennaia literatura : russkaia i perevodnaia).  The following reproduction from page 122 of volume 1 lists some early Soviet translations of Oscar Wilde, Walt Whitman and the German pacifist author Fritz von Unruh, complete with citations for reviews thereof. 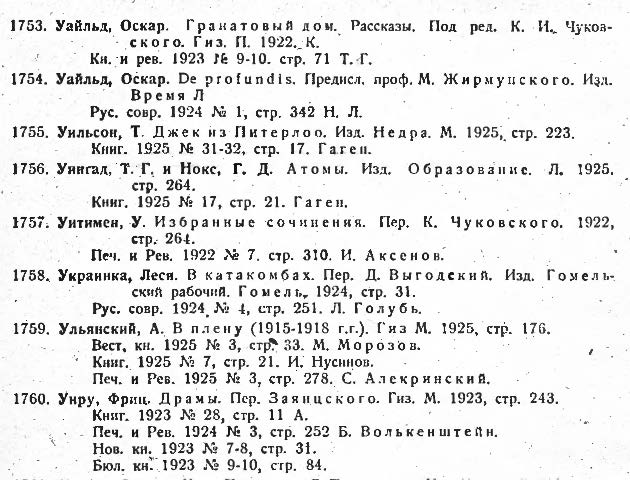 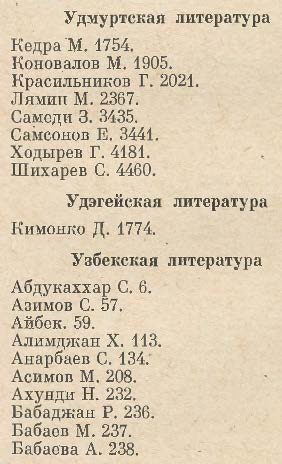 Even more ambitious is Matsuev's later 9-volume Sovetskai︠a︡ khudozhestvennai︠a︡ literatura i kritika, attempting to index all Russian-language literature and criticism thereof published in any format between 1938 and 1965.  Later volumes in the set include language indexes (left) that allow scholars to quickly review all translations from a particular language published during the years covered in that volume, but for earlier volumes, scholars must have a particular (translated) author in mind and look up their entry alphabetically.  The examples below are from page 65 of volume 1, covering the Daghestani author Rasul Gamzatov and the Georgian author Konstantine Gamsakhurdia (whose son Zviad later became the controversial first president of post-Soviet Georgia). 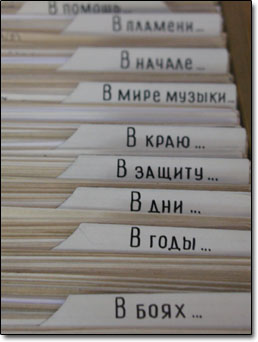 Many libraries in the REEE region now equal (or even surpass) their peers in the West in terms of providing robust online access to their collections via online library catalogs (see, for example, the catalog databases of the National Parliamentary Library of Georgia and the Kazakhstan Center for Cooperative Cataloging, both of which contain catalog entries for individual journal and newspaper articles as well as monographs).  It is nevertheless true, however, that there are very few major libraries around the world that have succeeded in transferring all the information contained in their old physical card catalogs to the new digital environment.  That is, libraries' holdings of older materials are often reflected poorly, problematically, or not at all in their own online catalogs.

Thankfully for researchers, this situation has led some major libraries to digitize their old card catalogs in their entirety, as is the case with the Russian National Library in St. Petersburg, whose scanned version of their card catalog reflects their Russian-language monographic holdings from 1725-1998, and with the National Library of Belarus'.  In these cases the actual text printed on the cards is not searchable, so the functionality is exactly that of standing in front of the physical card catalog in St. Petersburg or Minsk and flipping through cards arranged alphabetically by author, title, corporate author and/or subject.  In other cases OCR (Optical Character Recognition) has been run on the text on the cards, so that keyword searches for any term appearing on any of the catalog cards can be conducted.  Either way, such scanned card catalogs provide an invaluable means for researchers to review the older holdings of major libraries, which can help them both to identify materials they want to find in libraries closer to home and to plan for research trips abroad.