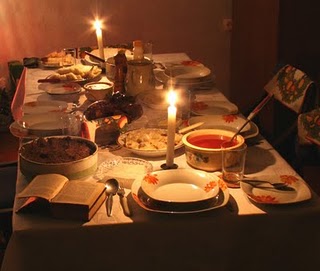 The table above is set for the Christmas Eve Dinner -- Wigilia.  It is the most tradition-imbued meal of the year.  The table is made with an extra setting, should a stranger arrive at the door, looking for a meal on the holy night. For a brief description of Wigilia traditions give this article a read.

Everyday Polish dining has its strict etiquette, particularly when guests are involved.  Some examples which differ from the American savoir-vivre:   Poles hold the fork in the left hand and the knife in the right (Continental style); you should wait for the hostess to invite you to start eating; it is advisable to take small amounts of food initially so you can accept second helpings which will inevitably be offered; try a bit of everything, so as not to offend the cook.  When invited to dinner, arrive 15 min. late to give the hosts some leeway for last minute preparations. However, arriving beyond the 15 min. grace period is considered as rude as arriving exactly on the hour. 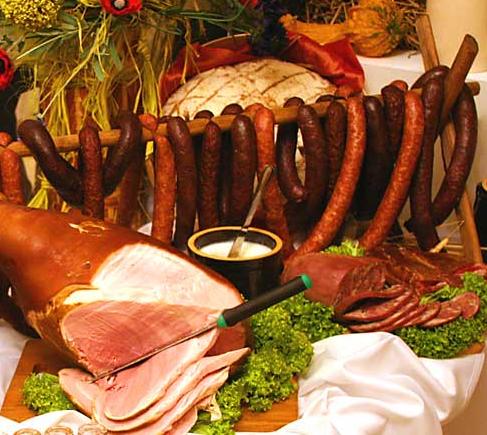 It is impossible to talk of Polish cuisine without mentioning the myriad of cold cuts which easily rival the best Vienna or Berlin can produce.  To ask for  sausage (kiełbasa) in a Polish deli will produce a puzzled look from behind the counter, since it is equivalent to asking for "a bottle of wine" in a French wine store.  -- There are many, many to choose from!  By the way, what passes for "Polish sausage" in many US supermarkets is a sad shadow of the original, resembling it mostly in shape.  When you have a chance, it is worthwhile to visit an ethnic Polish deli and see what the real thing tastes like. 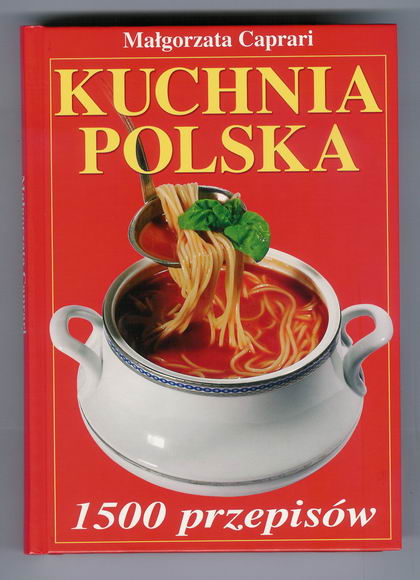 This link leads to a series of videos showing how to prepare classic Polish dishes.  The videos are narrated in English. Click on the picture of the dish to play video.

This is an excellent link with 100 Polish recipes divided into groups:soups, main courses, appetizers, drinks, and desserts.  A section on the history of Polish food is included.

Polish cuisine reflects the history of a nation situated at the crossroads of Europe.  Throughout its tumultuous history Polish cooking has been influenced by foreigners who came in peace or with the sword.  And so, today's Polish cookbook is very varied, showing influences of Eastern Europe: Russian, Lithuanian, Belarusian, Ukrainian, and Hungarian.  Present are also strong influences from Austria, France, Germany Italy, and Armenia.  There are even some dishes borrowed from Turks and Tartars, a memento of wars of the past.  Some of the most popular dishes have been borrowed from the Jewish cuisine.  The complicated history, partitions by foreign powers, cross-border influences, have caused the Polish regions to vary widely in their traditional dishes.  The variety is really broad and truly worth exploring. From simple yet flavorful dishes, to sophisticated delicacies that take days to produce, Polish kitchen has a lot to offer.  Explore this bounty, you will not regret it! 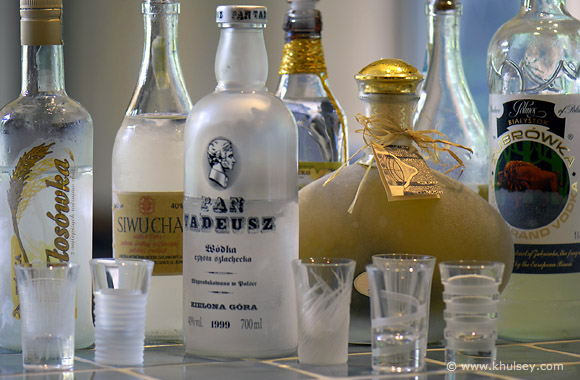 Who makes the best vodka in the world? Well, this is a topic for a major discussion, but one fact would be hard to deny.  Poles make some of the absolute finest vodkas available anywhere, and no wonder since the tradition of brewing wódka goes all the way back to the Middle Ages. Besides untold number of clear vodkas (wódki czyste), there are many excellent flavored vodkas. In the latter the flavoring agents are a legion, varying from every possible fruit, spice and honey combination, to exotic grasses (Żubrówka), to oak shavings (Dębowa).

The most popular traditional toast?  Na zdrowie! [For health!] 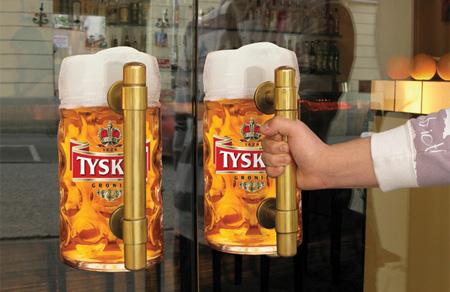 Beer in Poland has always been important part of the Polish menu. There are over 70 breweries in Poland.  During the period of communist regime the breweries were nationalized and the quality suffered. After Poland regained independence from the Soviet Bloc, the quality skyrocketed and the beer is enjoying a renaissance.  Some traditional Polish beers (polish: piwo) are Okocim, Królewskie, and Żywiec.  Most Polish beer tends to be in the Pilsner/lager family, but the tastes have greatly expanded with a host of good porters and flavored beers.

Poland's leading brewery at the moment is Tyskie (from the name of a Silesian town, Tychy).  This 400 year old brewery has been honoured twice with the most prestigious award of the world beer industry: the Gold Medal and  Grand Prix during the Brewing Industry International Awards, conducted since 1886 and referred to as the Oscars of Beer.  The woman in the picture above is about to enter a pub which advertises Tyskie on its door.  This is truly the sign of changing times. It is only recently that it is not considered crass for women to drink beer and that they are seen frequenting beer halls.