Introduction to the Polish Language 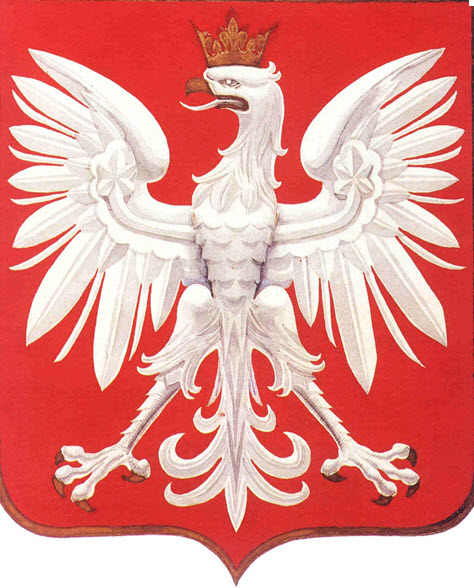 According to the Polish Constitution, the coat of arms of Poland is an image of a crowned white eagle in a red field. The Coat of Arms Act further specifies that the crown, as well as the eagle's beak and talons, are golden. The eagle's wings are outstretched and its head is turned to its right. According to legend, the White Eagle emblem originated when Poland's legendary founder Lech saw a white eagle's nest. When he looked at the bird, a ray of sunshine from the red setting sun fell on its wings, so they appeared tipped with gold, the rest of the eagle was pure white. He was delighted and decided to settle there and placed the eagle on his emblem. He also named the place Gniezdno (currently Gniezno) from the Polish word gniazdo ("nest").

After World War II, the communist authorities of the Polish People's Republic removed the "reactionary" royal crown from the eagle's head. Still, Poland was one of the few countries in the Eastern Bloc with no communist symbols (red stars, ears of wheat, hammers, etc.) on either its flag or its coat of arms. The crownless design was approved by resolution in 1955. To counter that, the Polish government in Exile introduced a new emblem with a cross added atop the crown. After the fall of communism in 1989, the crown came back, but without the cross.  (Source: Polish Wikipeda)

History and classification: The Polish language belongs to the West-Slavic group of the Indo-European languages together with Czech and Slovak. It emerged from the Proto-Slavic language as used as the mother tongue of all Slavic tribes in the past. Polish has developed so much that the texts written in the Middle Ages are not 100-per-cent understandable to contemporary Poles and need to be read with a dictionary of archaisms. During the times of the Partitions of Poland (1795-1918) the Prussian and Russian conquerors tried to eradicate Polish identity, but their plans eventually failed and Poles retained their language almost intact.

Geographic distribution: Polish is the official language of Poland. It is also used as a second language in some parts of Russia, Lithuania, Belarus, Ukraine and Kazakhstan. This phenomenon is caused by migrations and resettlements as well as frontier changes brought by the Jalta agreement in 1945 after World War II. As a result, lots of Poles were left outside the territory of their fatherland. Polish is spoken, naturally, by Polish emigrants living all around the world, also by their children and grandchildren. The total number of speakers worldwide is about 50 million.

Dialects: There are only a few dialects that differ from the standard Polish language, however the differences among them are not significant and mostly based on regional pronunciation and vocabulary changes. The most distinguishable are the dialects of Silesia and Podhale (highlander's dialect). Worth mentioning is Kashubian - a separate language used by the inhabitants living west of Gdansk near the Baltic Sea. The number of its users is estimated at somewhere between 100,000 and 200,000. Although it is gradually becoming extinct, a lot of effort is being put into saving it and it recently begun to be taught at local schools as a minority language.

General characteristics: Polish, like other Indo-European languages, shares some Latin grammar and vocabulary. There are 3 tenses (past, present, future), 2 numbers (singular and plural), and 3 genders (masculine, feminine, neuter). There are no articles but Polish, like Latin, and is an inflectional language that distinguishes 7 cases, defining the noun usage in a sentence. This feature makes our mother tongue difficult to master and presents a lot of trouble to foreigners.