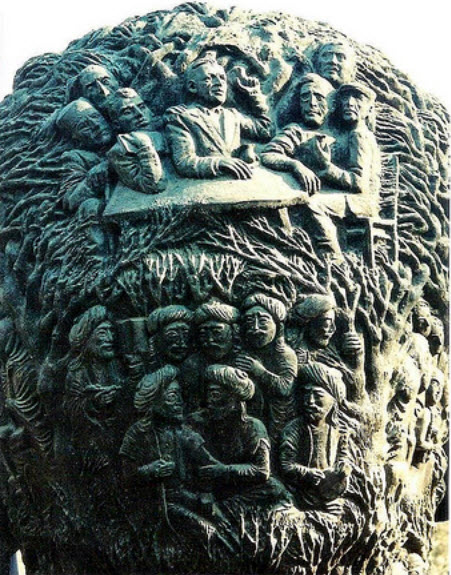 Azerbaijan - a nation with a majority-Turkic and majority-Muslim population - was briefly independent from 1918 to 1920; it regained its independence after the collapse of the Soviet Union in 1991. Despite a 1994 cease-fire, Azerbaijan has yet to resolve its conflict with Armenia over Nagorno-Karabakh, a primarily Armenian-populated region that Moscow recognized as part of Soviet Azerbaijan in the 1920s after Armenia and Azerbaijan disputed the status of the territory. Armenia and Azerbaijan began fighting over the area in 1988; the struggle escalated after both countries attained independence from the Soviet Union in 1991. By May 1994, when a cease-fire took hold, ethnic Armenian forces held not only Nagorno-Karabakh but also seven surrounding provinces in the territory of Azerbaijan. Corruption in the country is ubiquitous, and the government, which eliminated presidential term limits in a 2009 referendum, has been accused of authoritarianism. Although the poverty rate has been reduced in recent years due to revenue from oil production, the promise of widespread wealth resulting from the continued development of Azerbaijan's energy sector remains largely unfulfilled.

note: almost all Armenians live in the separatist Nagorno-Karabakh region

note: religious affiliation is still nominal in Azerbaijan; percentages for actual practicing adherents are much lower

country comparison to the world: 91

Southwestern Asia, bordering the Caspian Sea, between Iran and Russia, with a small European portion north of the Caucasus range

country comparison to the world: 113

note: includes the exclave of Naxcivan Autonomous Republic and the Nagorno-Karabakh region; the region's autonomy was abolished by Azerbaijani Supreme Soviet on 26 November 1991

On the flag of Azerbaijan, the "three equal horizontal bands of blue (top), red, and green; a crescent and eight-pointed star in white are centered in the red band; the blue band recalls Azerbaijan's Turkic heritage, red stands for modernization and progress, and green refers to Islam; the crescent moon is an Islamic symbol, while the eight-pointed star represents the eight Turkic peoples of the world."

Southwestern Asia, bordering the Caspian Sea, between Iran and Russia, with a small European portion north of the Caucasus range

country comparison to the world: 113

note: includes the exclave of Naxcivan Autonomous Republic and the Nagorno-Karabakh region; the region's autonomy was abolished by Azerbaijani Supreme Soviet on 26 November 1991

local scientists consider the Abseron Yasaqligi (Apsheron Peninsula) (including Baku and Sumqayit) and the Caspian Sea to be the ecologically most devastated area in the world because of severe air, soil, and water pollution; soil pollution results from oil spills, from the use of DDT pesticide, and from toxic defoliants used in the production of cotton

signed, but not ratified: none of the selected agreements