Information about Union Catalogs compiled by:

These pages of the LibGuide include a selective list of union catalogs useful to ILL librarians who are searching for verification and/or locations of Slavic and East European materials.

The links below provide direct access to the union catalogs. More information about them can be found in the following tabs.

What is a Union Catalog?

A union catalog is a bibliographic catalog, either printed or electronic, in which bibliographic entries are accompanied by locations of libraries that hold the described work. Some union catalogs may even include a greater level of detail for multi-volume set or periodical holdings for individual libraries.

Union Catalogs for Periodicals and Newspapers

The largest and most well-known union catalog is OCLC WorldCat. ILL librarians need little introduction to this tool, for it is a mainstay of their profession. This database is also critical for finding and verifying Slavic materials, especially those held in North American and western European libraries. However, more and more libraries from Eastern Europe are contributing records to WorldCat as well. Examples include the New Bulgarian University, National Library of the Czech Republic, National Library of Russia, National and University Library of Slovenia, and the University of Kyiv - Mohyla Academy. Records for both books and periodicals are included in WorldCat.

The main point to emphasize when searching for Slavic titles in WorldCat is that the librarian, scholar or student should try multiple searches in order to find bibliographic records that have been entered in a Romanization scheme that differs from the Library of Congress scheme. Please consult the Home and Linguistic/Orthographic Issues tab of this Libguide to learn more about Transliteration/Romanization and the problems you may face when searching for materials online and in catalogs.

The NUC pre-56 and other iterations are basic reference tools for ILL librarians and need no introduction. This section will concentrate solely on what kinds of Slavic and East European materials appear in all iterations. All Cyrillic works appearing in the NUC will use LC Romanization, so there is no need to worry about which scheme to follow. Non-Cyrillic Slavic and East European materials appear in Latin (English) alphabetical order and do not pose that particular challenge for ILL librarians. The choice of main entry is a cataloging decision. As you know, the citation presented to you by your patron may not reflect the way it was cataloged. The same bibliographic complications appear in Slavic materials as in English materials. Try looking for author, title, editor, series, or periodical title. Records for both books and periodicals appear in the NUC.

Slavic and East European titles published before 1956 in Croatian, Czech, Estonian, Hungarian, Latvian, Lithuanian, Polish, Slovak, and Slovene appear in the NUC pre-56, because they are written in Latin scripts. The diacritics did not bother the compilers. Cards for Slavic languages in Cyrillic (Belarusian, Bulgarian, Church Slavic, Macedonian, Russian, Serbian, Ukrainian) are included only for Library of Congress holdings, occassionally with library symbols from other libraries listed on the DLC cards. If the Library of Congress did not have the book or had not cataloged it by the time the pre-56 catalog was closed, the title is not included, even if ten other libraries in the U.S reported it. The explanation for not including Cyrillic cards from other libraries was that the NUC staff wanted all Romanization to be uniform and the cards submitted by other libraries did not always follow the LC scheme. If you consider that the catalog took decades to compile and edit, that the LC Romanization schema for Cyrillic languages was not standardized until the 1930s, and it must have taken a number of years for non-compliant libraries to change their practice, this decision does not seem so arbitrary. The catalog was edited so all entries for the same book or periodical should be grouped together, regardless of form of entry on the catalog card. The cards may be in Romanization or in Cyrillic, but they will have the main entry in Romanization and somewhere in the record a Romanized title as well.

Examples of non-Cyrillic and Cyrillic (LC only) entries are below (links at the bottom of the box). The page from NUC pre 56 234:35 shows that non-Cyrillic Slavic materials were included in NUC pre-56 regardless of holding library. The next example from NUC pre-56 596:542 shows that Cyrillic entries are only from the Library of Congress, but there are many or various locations for English or non-Cyrillic Slavic titles. Both pages show unique N numbers for each entry, in this case, NH or NT depending on the beginning of the main entry. These numbers were used in locating additional locations.

Slavic and East European titles published after 1955 and some pre-1956 in Croatian, Czech, Polish, Slovak, and Slovene appear in the compilations just as in the pre-56 set. The change from the pre-56 set is that the later NUC compilations include Cyrillic and/or completely Romanized cards for all libraries, not just the Library of Congress. The catalog was edited so all entries for the same book or periodical should be grouped together, regardless of the main entry on the catalog card. The cards may be in Romanization or in Cyrillic, but they will have at least the main entry in Romanization and somewhere in the record a Romanized title as well. The scope of the Cyrillic titles is the same as the non-Cyrillic titles, mostly published after 1955, but with some pre-56 as well. The reason behind including some of the pre-1956 titles is that they were cataloged after the closure of the pre-56 catalog. For new holdings of pre-1956 titles included in the pre-56 compilation, see the Register of Additional Locations.

The page from NUC 1958-1962 8:418-419 with entries for Svatopluk Čech shows that the Eastern European diacritics have no effect on the alphabetization of the entries. Čech appears in between Ceceniowski and Ceci as if there were no diacritic over the “c.” An entry for Anton Chekhov from NUC 58-62 9:44 shows a Cyrillic record from libraries other than LC. For some of the later NUC compilations a star in the record indicates that there are additional locations listed at the back of the volume. The unique numbers in the entries all begin with RL [Rowman and Littlefield, the publisher of the book], but these numbers are not used to identify additional locations, the LCCN’s are.

These supplements provide additional library locations for titles included in the original pre-56 and subsequent NUC compilations. Initially it was published as supplementary volumes to pre-56, 1956-1965, etc., but later the RAL appeared on microfiche.  To use the RAL you must look up the work in the main NUC volumes and jot down the number on the bottom left or bottom right of the card. The RAL is arranged by these numbers. The RAL entries do not include title information, only the number, one word from the main entry, usually the author’s surname, and a list of additional locations reported after the original catalogs were closed. The RAL is useless without the unique bibliographic number. Over the years the unique numbers were replaced by LCCNs. For items that were first described in the Slavic Cyrillic Union Catalog (entries in RAL beginning in 1980) there are unique SCC numbers. These should be jotted down from the Slavic Cyrillic Union Catalog and looked up in the RAL to find additional locations. 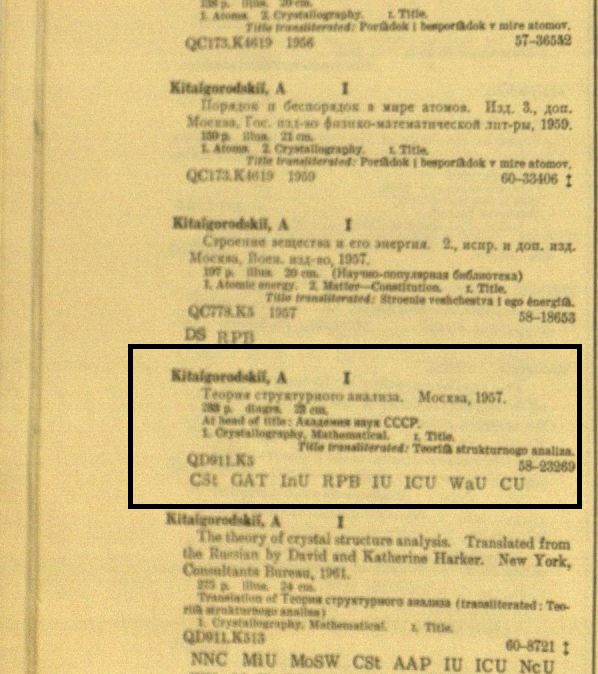