Non-Latin Scripts in a Romanized World: Union Catalogs for Periodicals and Newspapers

Although it was published almost 50 years ago, this 5-volume set is still useful for identifying libraries in the United States and Canada that hold Slavic and East European serials (not newspapers). Nearly 1,000 libraries submitted their information for inclusion in the ULS. It is arranged alphabetically by title or main entry. Cyrillic and non-Cyrillic titles are included, but the Cyrillic are all Romanized. For Eastern Europe, the main entry is often very important for the searcher, because some of the most sought after titles are those of various academies of arts and sciences. The ULS predates AACR or AACR2, thus the use of old cataloging rules. For example, the Soviet academy publications appear under Akademiia nauk S.S.S.R. or under Akademiia nauk Azerbaidzhanskoi SSR, for the regional Azerbaijani branch.

Another very common example is the old cataloging rule of listing publications of scholarly institutions such as a university or scientific institute under the city in which the institution is located. (See the Cataloging Issues tab for more information on form of entry.) For Slavic this means you need to know or figure out where certain important institutions are located. For example, there are many serials listed under the cities of Moscow or Kazan’ instead of under the title of the serial. The image linked below from ULS 3:2763 shows the first page of entries for the city of Moscow. The first listing under Moscow is for a serial published by the Aviation and Technology Institute. Once a title and holding library are located in the ULS, a follow-up search in the online catalog of the holding library is often very appropriate, because of the age of the information and the notations used to indicate holdings. Many of the holdings show a starting volume followed by a plus sign to indicate that a library was subscribing to the title at that time. After so many decades, the holdings information likely has changed.

By the time the third edition of the ULS was being compiled, World War II was over, the Cold War had begun, and the space race with the Soviet Union was in full swing. The implications of these historical events for libraries is significant, for with the rapidly growing interest in Slavic studies in the United States, large research libraries were not only collecting Slavic materials at a much higher level, they were also cataloging their materials in a timely fashion and doing retrospective cataloging of their Slavic collections. Thus, the amount of Slavic material and the number of holdings included in the 3rd edition of the ULS is much higher than in previous editions. The ULS may seem like an obsolete source today, but for Slavic it sometimes pans out for locations that do not appear in WorldCat. Its sister publication, New Serials Titles, is less useful today for Slavic, so it will not be described here.

Half a Century of Soviet Serials

When this publication appeared in 1968, it was an instant classic in the field, not just because of its utility, but because it was the last printed union list of its kind. It superceded and expanded Serial Publications of the Soviet Union, 1939-1957. The compiler not only provided greater date coverage in the newer work, but he also was able to take advantage of Soviet-issued periodical bibliographies issued after the publication of the first work.  For holdings and bibliographic information on Soviet titles after 1968 you need to use WorldCat, online library catalogs, or printed catalogs of individual libraries.

This two-volume set detailed holdings of almost 30,000 Soviet serials in several hundred U.S. and Canadian libraries, as well as some Soviet era periodical publications that had not been described elsewhere. It covers periodicals published throughout the former Soviet Union regardless of language. For example, there are titles in Ukrainian, Moldovan, Latvian, etc. If the language of the serial title is not in Russian, the language is given in parentheses immediately after the title. It does not include newspapers. This work, too, follows old cataloging rules, not AACR or AACR2, regarding main entry by academy of sciences or by place. This work provides symbols for holding libraries, but specific holdings only for the Library of Congress, thus follow-up checking in the online catalogs of specific libraries is necessary. For Library of Congress holdings it is still amazingly accurate for the dates covered. In fact, Half a Century is often useful to get LC call numbers for titles whose online bibliographic records are poor. Sometimes this work is the only way to find the title at LC.

One aspect of the work that is confusing is the listing of titles not held by any North American library. They are indicated with an asterisk, but the asterisk is often overlooked and ILL librarians contact LC assuming that LC must have the title. This union list is available in full view via the Library of Congress at http://www.loc.gov/rr/european/bibs/smits.html .

Gazety Rossii (1703-1917) [Newspapers of Russia (1703-1917)] - http://www.nlr.ru:8101/rlin/svnewsp.php This is a union catalog of Russian imperial newspapers published from 1703-1917. It also contains records for Russian diaspora newspapers from the same time period. The catalog includes the records and holdings for three major repositories in Russia: the Russian National Library, the Russian State Library, and the State Public Historical Library.  In addition, in some records there are holdings for the Library of the Federal Archives. The interface is in Russian. The catalog must be searched in Cyrillic and hitting the return key does not initiate the search. You must press the search button. When you have a hit list, click on Podrobnee [Details] to see a bibliographic records and holdings. The first group of holdings is usually a list of what was published. Specific holdings for each library appear after the abbreviation for the library.

The image for the entry below is for the newspaper Vladimirskie gubernskie vedomosti. It shows the bibliographic details at the top, with the second section describing issues published, while the following section shows the beginning of the holding for RNB, the Russian National Library in St. Petersburg. This catalog is enormously helpful for finding Russian newspaper holdings, as well as bibliographic verification. Click the image for a larger view. 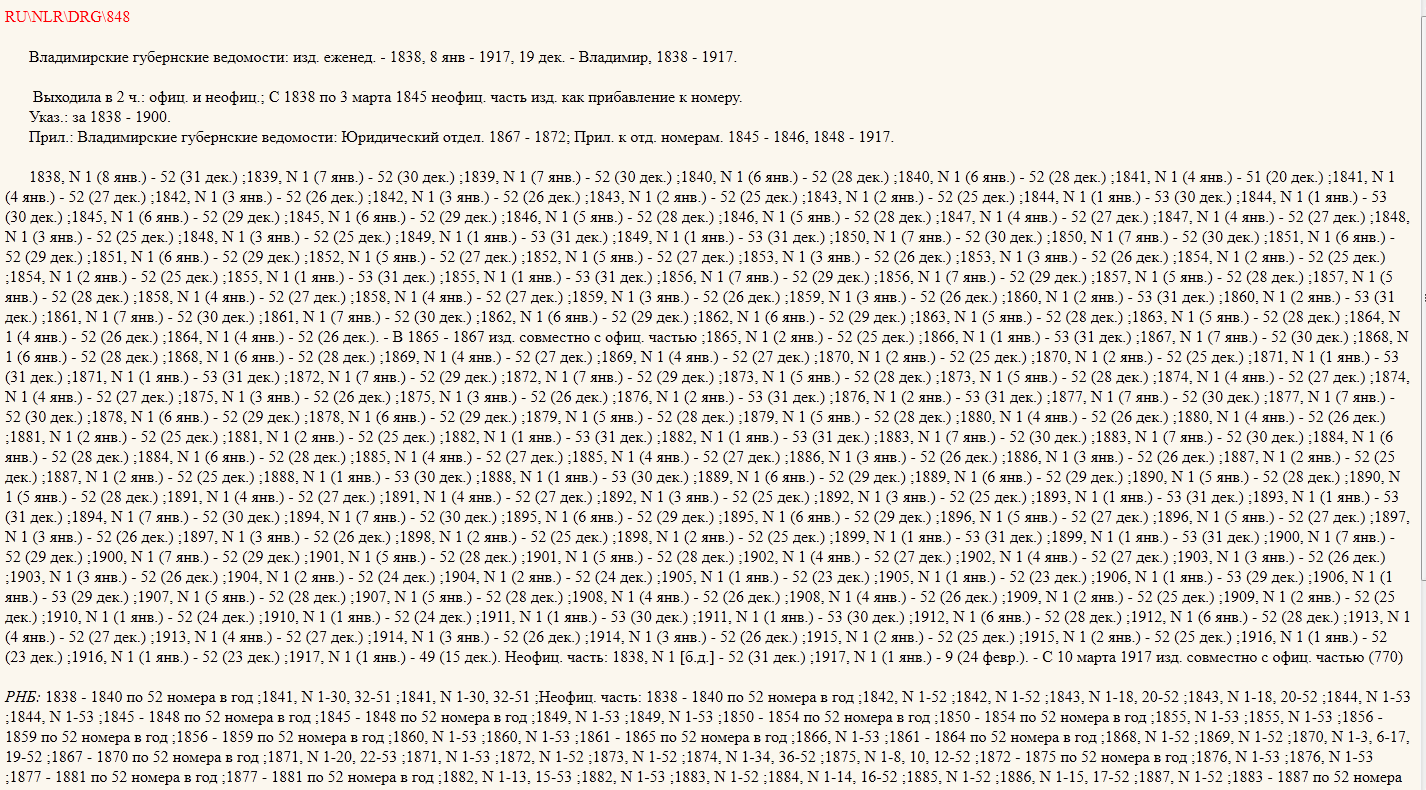 This is a union catalog of Russian and foreign periodicals in Russian libraries. The catalog was created in 2002 and contains over 1800 periodical titles and 50 million bibliographic citations from over 200 participating online catalogs. Among the members of the system are many regional libraries as well as some of the major libraries in Moscow and St. Peterburg.

The interface is only in Russian, but no searching is necessary. The titles are all arranged in an alphabetical browse list, one for Latin alphabet works and the other for Cyrillic alphabet titles. There is no bibliographic information about the journals. If you click on a particular title, you then get a linked list of issues. Once you click on the desired issue, the catalog provides you with a list of libraries that hold the title as well as a geographical depiction (a map) of where the library is located in Russia. This feature is unusual for a union catalog, but must search some information need for Russian users.

The catalog also allows you to search for specific articles. The article search (only in Cyrillic) is available at http://arbicon.ru/services/mars_analitic_demo.html . The title search is really a title keyword search. When you find a pertinent citation, the holding libraries for the periodical issue in which the article appears, are listed after the subject headings. The title of each periodical is linked so you can click on the link and get all of the article citations for that periodical. One problem with the catalog is that there is no indication of scope or depth of content. The only article citations found during numerous searches were from 2008. Perhaps the catalog stopped providing the service after 2008.

This brief union list can be surprisingly helpful. It lists only the holdings of periodicals (not newspapers) of the Helsinki University Library, the Library of Congress, Harvard, and the New York Public Library, but all of these libraries have significant holdings of pre-revolutionary Russian periodicals. It includes Russian language titles from the entire Russian Empire, which today encompasses, besides Russia, other countries such as Ukraine, Latvia, Lithuania, Georgia, etc. It also contains some pre-1917 Russian titles published outside of the Russian Empire in cities such as Vienna, London, and Berlin. There are even some Soviet era titles in the catalog, but not as many as there are from the imperial period. This union list includes the eparkhial’nie and gubernskie vedomosti [eparchy and provincial gazettes] which are in constant demand by American researchers. The Helsinki holdings are given in detail and without a library designation, thus an entry with just holdings but no library symbols reflects what was held by Helsinki at the time of publication. Holdings of the other three libraries follow their library symbols. The catalog follows the old cataloging rules (not AACR or AACR2) regarding main entry, so you may find titles listed under places like Russia or Moscow. The Helsinki University Library is so strong in pre-revolutionary holdings because it was a depository library under the Russian Empire. The union list is available via HathiTrust in full view: http://babel.hathitrust.org/cgi/pt?id=mdp.39015002239377

Information about Union Catalogs compiled by: