Managing Slavic requests without being fluent in Russian, or how the SRS can help you

The Slavic Reference Service (SRS) deals with Slavic-, Eastern-Europe-, and Eurasia-related reference questions year-round. While our staff's collective expertise in the languages of the region, as well as in disciplines such as Russian history, Polish literature, and Central Asian Studies are invaluable, they cannot help with every single request we receive--whether they come to us in person, over the phone, through email or chat or (especially) via interlibrary loan. The SRS's work on interlibrary loan requests requires just as much knowledge of libraries, library history, search strategies, transliteration systems, cataloging practices, and open-access resources as the subject and linguistic knowledge referred to above. It is this "non-Slavic" knowledge that enables us to handle interlibrary loan requests in languages we don't necessarily know, an it is this knowledge that can enable others to do the same.

Each country in the region presents its own challenges. Requests pertaining to Russia, for example, are made easier by the many excellent bibliographic resources available, but are also made more difficult by the fact that Russian is written in a non-Latin alphabet. Advances in translation and transliteration technologies are making this less and less of a problem, but without basic understanding of Russian transliteration and other commonly-encountered problems, verifying a citation or locating an item in a U.S. library can be impossible (even, in some cases, for native speakers).

This LibGuide is intended to introduce ILL librarians (especially those who may not have any background in Slavic Studies or languages) to the basic skills and resources that will help them verify bibliographic citations, identify libraries where particular items are held, and complete ILL requests with little to no wasted time. It can also be of great use to scholars and students who want to learn more about finding and verifying Slavic, East European and Eurasian, citations and materials.

ILL librarians are not intended to be Slavic specialists. Frequently ILL departments are fortunate to have staff with language specialization but even if you know another language you may not be familiar with the rules that govern transliteration in libraries.

One of the most basic things to understand about transliteration or romanization is that there is no one system used everywhere in the world.  Both vowels and consonants are affected as is clear from the table below. 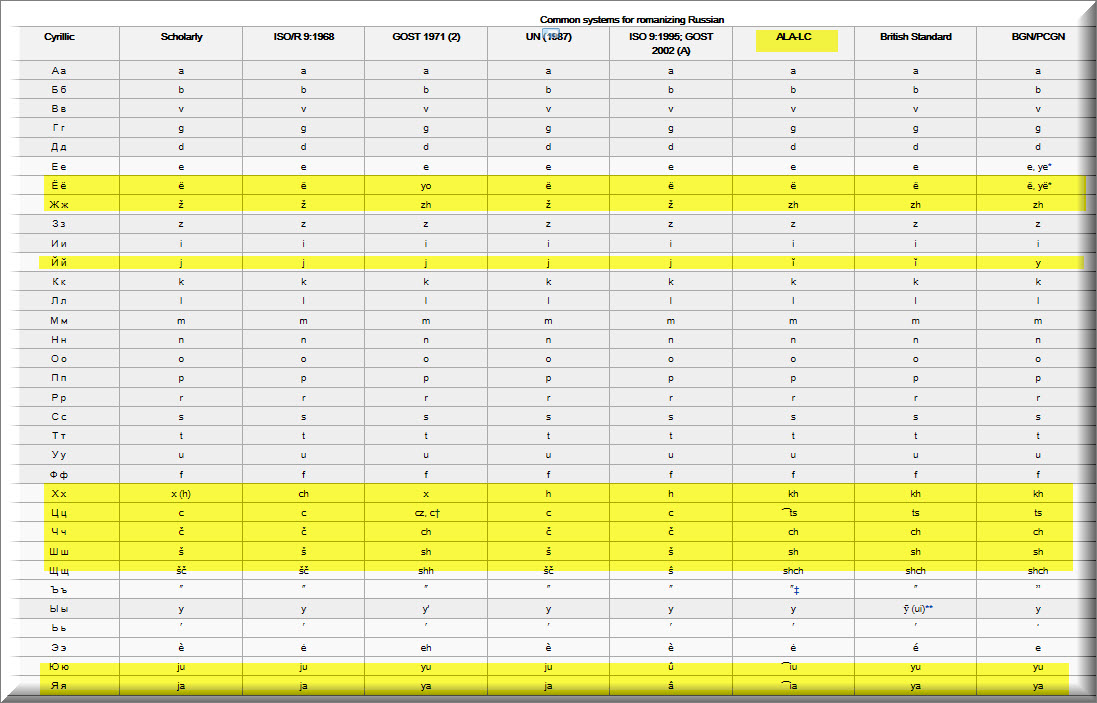 All ILL staff are probably asked to interpret a broad array of citations in the numerous requests they handle.  There are tools, both online and in print, that are definitely useful for a variety of scripts.

Library of Congress (LC) Romanization tables. This is an excellent resource when you are looking to find out how titles will be transliterated in U.S. catalogs for virtually every non-Latin script in the world. It is very important to keep in mind that this form of transliteration is not used in all libraries everywhere. It is very important to look at the notes for various letters here as it can be essential for finding the proper transliteration.

Not all transliteration tools are created equal

Google seems to have outstripped the competition in this area with their transliteration tool. Though we have not tested all of them, this one does default to LC transliteration from Russian.  The only glitch we found is that the old orthography is ignored when entered and the modern Russian spelling is returned.  So, for example, the two spellings viestnik and vestnik return the same spelling.  This is actually not a problem if you are looking for contemporary holdings for such a title. However, if you are looking for scanned full-text,which might include old orthography, it can make a difference.

Of all the transliteration programs online this seemed the most effective with one major caveat.  This system will expect you to be working from German transliteration, i.e. you will use ja for "я" or  ju for "ю" instead of LC transliterations ia for "я" and iu "ю". This site does have a spell checker function which will at least alert you if the transliteration might be incorrect. The user simply types in English from any keyboard and the characters are automatically converted to Cyrillic. It does require care on the part of the searcher if the information is to be searched correctly.

This site will give you a variety of possible transliterations that might be useful.  However, without knowing which one you need it is a bit tricky to use.  It is probably most useful if combined with the LC Romanization tables.  One other word of warning, in our own testing, in some cases none of the transliterations provided were correct.

So you have a transliterated title and you don't find holdings in the U.S.  You want to try the Russian libraries.  If you transliterate at this site you will get an incorrect spelling in Russian in many cases. Whatever conversion they are using it is not correct to go back to the original Russian. If you are familiar with Russian you can test this yourself with words like Izvestiia, Uchenye, and any number of other generic titles.