Shostakovich: The Quartets in Context: Reception in the West

There are a wealth of sources available through most libraries that will make finding material on Shostakovich fairly easy.   There is one thing to keep in mind.  Cyrillic alphabet words are rendered in a variety of ways into latin characters.   Therefore, you will find the composers name spelled in all three of the following ways:

The number of results you retrieve from a search will be radically affected by the spelling you use. Some of the databases you will not want to overlook include:

Below you will find links to a few articles on the reception of Shostakovich in the West.  They are a random sample, to give a general idea of some of the popular opinion on Shostakovich.

Stalin and the Arts

Pursuing a career as an artist in Soviet Russia was a somewhat schizophrenic experience.  Compare the two brief excerpts below.  Then compare the two articles from Pravda on the opera Lady Macbeth of Mtsensk.  The first appeared after the premiere of the opera the second after Stalin had heard it.

The whip that cracks loudest and most potently in Russia is the Communist Party newsorgan Pravda ("Truth"), in which Joseph Stalin's lightest whims and heaviest 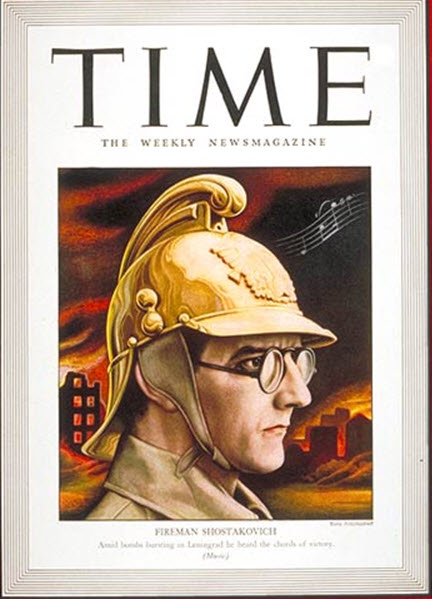 CRACK!—even louder that same day Pravda lashed out against Composer Dmitri Shostakovich, whom every Soviet music critic has hailed as the Revolution's most brilliant genius in the realm of operatic and symphonic composition. Not only has Comrade Shostakovich been Bol- shevism's musical darling, but Capitalism in Manhattan put on its boiled shirts and sped to the splendiferous Metropolitan Opera House premiere of his master work, Lady Macbeth of Mzensk (TIME, Feb.11, 1935). Pravda called Shostakovich's compositions "un-Soviet, unwholesome, cheap, eccentric and tuneless." The devastating Communist epithet "bourgeois" was tagged to them. Rehearsals of his latest ballet Limpid Stream, on which the Corps de Ballet of Moscow's great Bolshoi Theatre have been working diligently for months, were canceled. As Soviet critics leaped to a new point of view which would save their jobs last week, they discovered that James Joyce's Ulysses, previously so esteemed in Moscow that it has been appearing serially in a leading Soviet review, is confused, obscene and "written in English that can hardly be understood by an Englishman." Moscow critics urged Soviet composers to turn back to Tchaikovsky, Mussorgsky and Rimsky-Korsakov; Soviet writers to turn back to Shakespeare, Goethe and Pushkin. In the general Bolshevik artist furor this week it was everywhere believed, although not officially confirmed, that Joseph Stalin early last week heard for the first time some of Shostakovich's music, then translated his personal reactions into the lashing Pravda editorial which called the Red Genius' works "muddle instead of music, fragments of melody dissolving into a general roar, scrunch and scream."

"Owlish, talented little Dmitri Shostakovich, who intimately knows that a Russian composer must sing in tune with the Communist Party's harmonic scheme, last week gave faithful praise to the blower of the U.S.S.R.'s biggest pitch pipe: Joseph Stalin himself.

Wrote Shostakovich in the magazine Ogonek: "Many workers in the arts meet Stalin, and every one of them has been surprised by his immense understanding of art and the delicacy and depth of his wisdom and judgment." Stalin, he reported, had listened to many works entered in competition for a hymn of the Soviet Union, and "with surprising exactitude" put his finger on precisely what was wrong with each of them. "For composers," said Shostakovich, ". . . these meetings with the leader were a real school which left lifetime traces in their consciousness."

Each of the above gives an idea of how the world changed for Shostakovich, how his work was variously recieved under Stalin.  For more Western reporting on this an easily accessible is Time magazine, freely available in full text at http://www.time.com.  The contents can be searched from this main page.
Read more: http://www.time.com/time/magazine/article/0,9171,811686,00.html#ixzz1CLKViR6M