A guide to the history and bibliography of printed works in the languages of Afghanistan before, during and after the Soviet occupation of 1979-1989 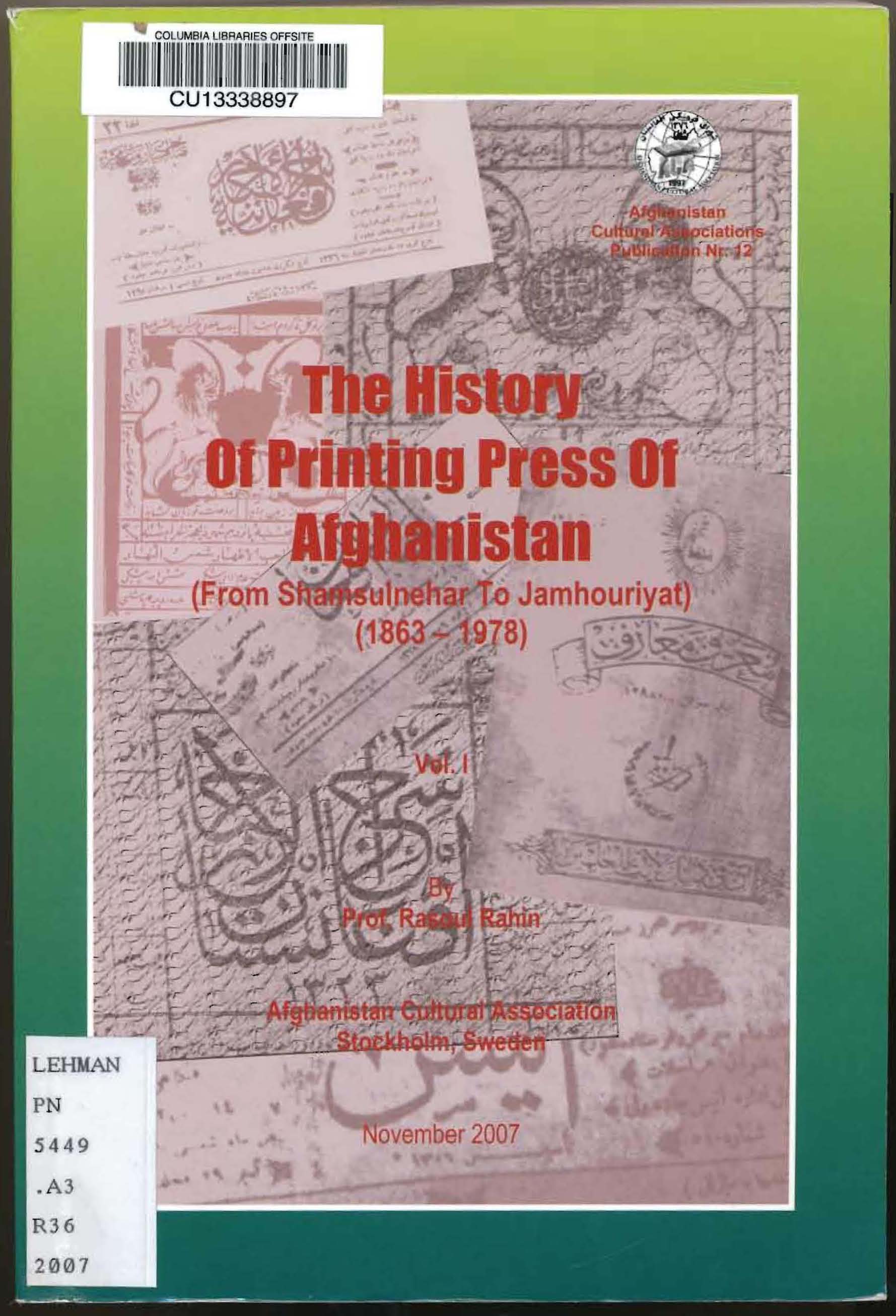 Afghanistan Digital Library aims to "retrieve and restore the first sixty years of Afghanistan’s published cultural heritage. The project is collecting, cataloging, digitizing, and making available over the Internet as many Afghan publications from the period 1871–1930 as it is possible to identify and locate. In addition to books, this will eventually include all published serials, documents, pamphlets, and manuals."  Researchers seeking digitized materials are encouraged to view the bibliography of books, newspapers, and documents. 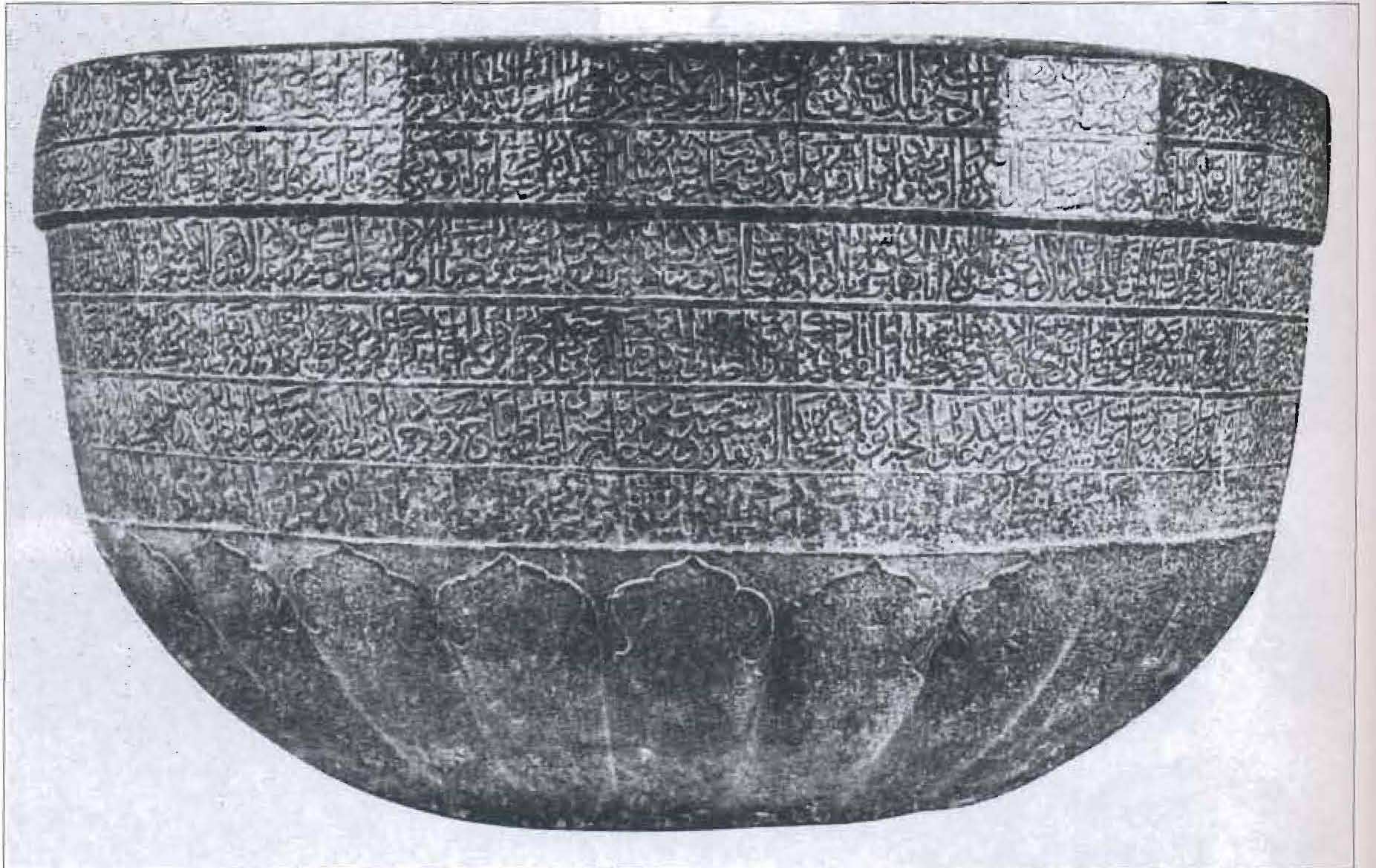 The printing press in emerged in the 1870s during the reign of Shīr Alī Khan.  The emir inaugurated the printing age with the purchase of lithograph printing equipment from . printed its first newspaper Shams an-nahār in 1873 (1873-1878).  Lithographs (books) printed during 1870-1901 period are listed in G. F. Girs’ work, “Pervye pechatnye knigi Afganistana,”[in Pamiatniki istorii i literatury vostoka, Moskva, 1986, the list appears on pp. 115-132], with the following information:  title translation in Russian, author, language of publication, place of publication, annotation, and physical description.  Major serial publications that appeared in from1905 to 1932 are discussed in Bibliografiia Vostoka (vyp. 5-6, 1934) [see E.Ė. Bertel’s, “Afganskaia pressa,” pp. 9-26].  E. Ė. Bertel’s lists publication frequency, names of editors, topical coverage, and the language of publication.  Researchers interested in Afghan publications should also consult Ali Ahmad Saber's work, A Guide to magazines and newspapers of Afghanistan from 1252-1356 (1873-1977) [Kabul: University Printing Press, 1977].

Anjuman Ketab Khana-e-Afghanistan (Afghanistan Library Association) was established in 1971 by Abdul Rasul Rahim, “a former Kabul University Librarian.”  Anjuman Ketab Khana-e-Afghanistan’s national objectives included the following: “to promote literacy and libraries in ”; “…to improve the status of librarians and to lobby for a national library system and for a of in .”  The library Association also embarked on compiling a national bibliography for , which it “irregularly published”.  In 1977, Muhammad Ibrahim Stwodah [Muhammad Ibrahim Sutudah] and Ahmad Zia Modarrissi’ [Ahmad Ziya Mudarrisi] published their compiled work, Kitābshināsī-i  millī-i  [’s National Bibliography (annotated) July 17, 1973-August 17, 1977].  The national bibliography was published by Kabul University Library as "Library Series no. 11."  The national bibliography‘s scope included “…all publications since the proclamation of the Republic in Afghanistan, in July 17, 1972 (26 of Saratan, 1352) to the time of publishing this [bibliography]” [Source: World Encyclopedia of Library and Information Services (Third Edition, Chicago, 1993), "Afghanistan," pp. 36-38;  Kitābshināsī-i  millī-i Afghānistān, "Preface," pp. 1-2].  The traumatic events of the past thirty one have prevented Afghanistan from fully restoring the publication of a national bibliography.  Since the fall of the Taliban, restoration projects have began to offset the damage caused military conflict at Kabul University Library, the "unofficial" national library of Afghanistan.  Researchers interested in the development of libraries in Afghanistan should consult Edward R. Reid-Smith's work, "Library development in Afghanistan"[Unesco bulletin for libraries, v. 28, no. 1, January-February, 1974, pp. 17-21].  For information on the condition and restoration projects currently underway at Afghan libraries, see Rosemary Talab's work, "Kabul University Library in Afghanistan: Postwar Emergence"[International Leads, vo. 16, no. 3, 2002], and Nancy Hatch Dupree's work, "Libraries in [Afghanistan]" [International Preservation News, no. 19, 1999, pp. 20-26].