There are many books about Turkish folk culture, literature and music available at the University Library, through I-Share and ILL.

Conducting searches is easy and there are many search terms to use.

For example, if you are interested in Nasreddin Hoca, using his name in a Keyword search is a great start.

If you are more interested in practicing your Turkish language skills, search Folk tales, Turkish as a Subject search in the library's catalog.

The Republic of Turkey Ministry of Culture and Tourism provides information on Turkish folk culture divided by region throughout history, supplemented with specific examples of folk art, photographs, and videos. 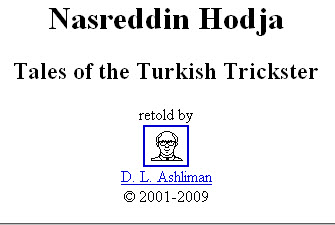 D. L. Ashliman: ​Nasreddin Hodja is Turkey's (and perhaps all of Islam's) best-known trickster. His legendary wit and droll trickery were possibly based on the exploits and words of a historical imam. Nasreddin reputedly was born in 1208 in the village of Horto near Sivrihisar. In 1237 he moved to Aksehir, where he died in the Islamic year 683 (1284 or 1285). As many as 350 anecdotes have been attributed to the Hodja, as he most often is called. Hodja is a title meaning teacher or scholar. He frequently is compared with the northern European trickster Till Eulenspiegel.