In his 1946 Conserving Endangered Wildlife Species, Hartley H.T. Jackson was an early user of the term "endangered species" to address problems of wildlife conservation.  Beginning with the example of the Dodo, Hartley described the growing threat to many species posed by human development:

"Many factors have probably been involved in the extinction of animals. In the geologic past before the advent of man we might theorize on the causes of such extinctions not attributable to man. Since man's appearance on the scene in recent times, with one or two possible exceptions all cases of wildlife extinction can be lodged in his own hands" (Hartley, page 247).

The act also provides a definition for "threatened species," defining these as "any species which is likely to become an endangered species within the foreseeable future throughout all or a significant portion of its range" (page 4).

The International Union for Conservation of Nature and Natural Resources (the IUCN is a United Nations affiliated organization) has developed a set of conservation status standards that are used to determine the status of species listed in the IUNC Red List. According to the IUCN Red List, an endangered species is "facing a very high risk of extinction in the wild."

The IUCN conservation status diagram (uploaded by user Pengo and used under CC 2.5).

The IUNC standards provide specific criteria for listing of a species as endangered, based on a variety of factors, including decline in population, reduction in geographic range, total size of population, total extent of geographical range, and calculated probability of extinction (see IUCN Red List Categories and Criteria version 3.1, section 5). 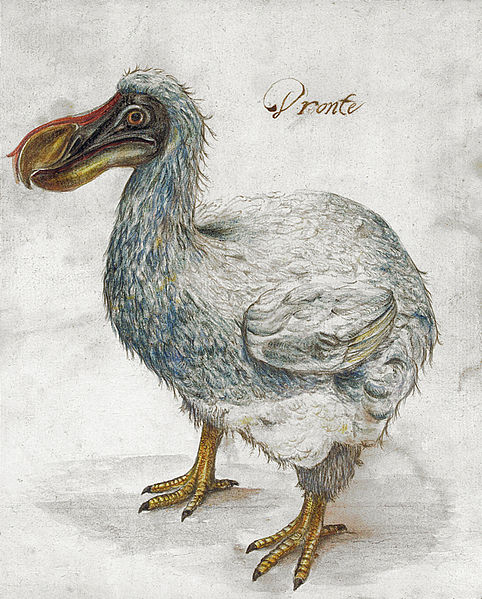 The flightless Dodo, native to the island of Mauritius, had no natural fear of humans.

This seventeenth-century image of a Dodo was created by an unknown artist and uploaded by user Jan Arkesteijn. It was scanned by Christies and is in the public domain in the United States.

If you have questions about endangered species or other environmental science topics, please contact: