Check out the Ukrainian research guide on the Slavic Reference Service's website. The provided link will take you to the page for the National Bibliography of Ukraine, but there are many more resources provided by SRS including Archive information, Bibliographies of Bibliographies, Linguistics, Monograph resources, and Periodical resources.

If you are interested in learning more about the history of Ukraine, searching the University's Library Catalog is a good place to start. 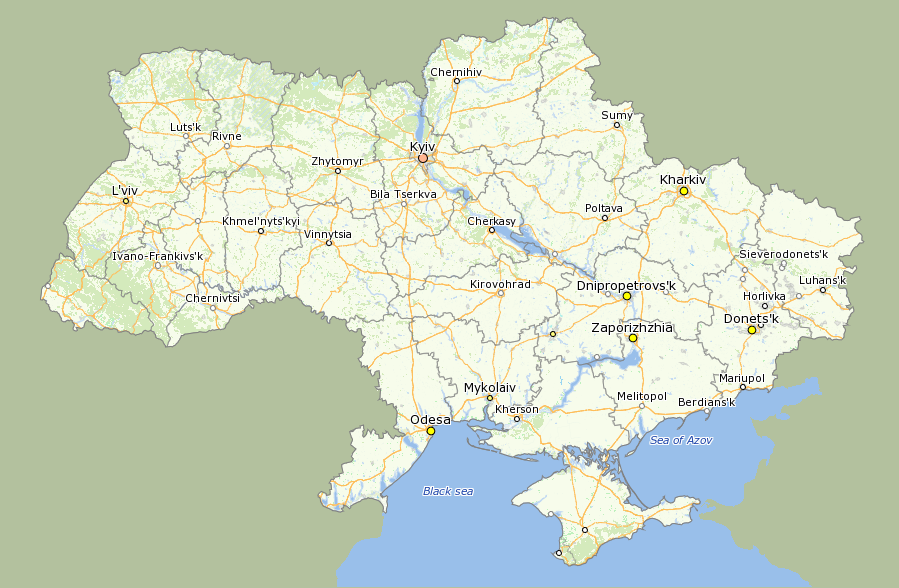 Follow this link for an interactive map of Ukraine.

The first identifiable groups to populate what is now Ukraine were Cimmerians, Scythians, Sarmatians, and Goths, among other nomadic peoples who arrived throughout the first millennium B.C. These peoples were well known to colonists and traders in the ancient world, including Greeks and Romans, who established trading outposts that eventually became city-states. Slavic tribes occupied central and eastern Ukraine in the sixth century A.D. and played an important role in the establishment of Kyiv. Kievan Rus Prince Volodymyr converted the Kievan nobility and most of the population to Christianity in 988. Situated on lucrative trade routes, Kyiv quickly prospered as the center of the powerful state of Kievan Rus. In the 11th century, Kievan Rus was, geographically, the largest state in Europe. Conflict among the feudal lords led to decline in the 12th century. Mongol raiders razed Kyiv in the 13th century.

Most of the territory of what is modern Ukraine was annexed by Poland and Lithuania in the 14th century, but during that time, Ukrainians began to conceive of themselves as a distinct people, a feeling that survived subsequent partitioning by greater powers over the next centuries. Ukrainian peasants who fled the Polish effort to force them into servitude came to be known as Cossacks and earned a reputation for their fierce martial spirit and love of freedom. In 1667, Ukraine was partitioned between Poland and Russia. In 1793, when Poland was partitioned, much of modern-day Ukraine was integrated into the Russian Empire.

The 19th century found the region largely agricultural, with a few cities and centers of trade and learning. The region was under the control of the Austro-Hungarian Empire in the extreme west and the Russian Empire elsewhere. Ukrainian writers and intellectuals were inspired by the nationalistic spirit stirring other European peoples existing under other imperial governments and were determined to revive Ukrainian linguistic and cultural traditions and reestablish a Ukrainian state. Taras Shevchenko (1814-1861), national hero of Ukraine, presented the intellectual maturity of the Ukrainian language and culture through his work as a poet and artist. Imperial Russia, however, imposed strict limits on attempts to elevate Ukrainian culture, even banning the use and study of the Ukrainian language.

When World War I and the Russian revolution shattered the Habsburg and Russian empires, Ukrainians declared independent statehood. In 1917 the Central Rada proclaimed Ukrainian autonomy and in 1918, following the Bolshevik seizure of power in Petrograd, the Ukrainian National Republic declared independence under President Mykhaylo Hrushevsky. After three years of conflict and civil war, however, the western part of Ukrainian territory was incorporated into Poland, while the larger, central and eastern regions were incorporated into the Soviet Union in 1922 as the Ukrainian Soviet Socialist Republic.

The Ukrainian national idea persevered during the twenties, but with Stalin's rise to power and the campaign of forced collectivization, the Soviet leadership imposed a campaign of terror that ravaged the intellectual class. The Soviet government under Stalin also created an artificial famine (called “Holodomor” in Ukrainian) as part of his forced collectivization policies, which killed millions of previously independent peasants and others throughout the country. Estimates of deaths from the 1932-33 Holodomor alone range from 3 million to 7 million.

When the Nazis invaded the Soviet Union in 1941, some Ukrainians, particularly in the west, welcomed what they saw as liberation from Communist rule, but this did not last as they quickly came to understand the nature of Nazi rule. Nazi brutality was directed principally against Ukraine's Jews (of whom an estimated 1 million were killed), but also against many other Ukrainians. Babyn Yar in Kyiv was the site of one of the most horrific Nazi massacres of Ukrainian Jews, ethnic Ukrainians, and many others. Kyiv and other parts of the country were heavily damaged.

After the Nazi and Soviet invasions of Poland in 1939, the western Ukrainian regions were incorporated into the Soviet Union. Armed resistance against Soviet authority continued as late as the 1950s. During periods of relative liberalization--as under Nikita Khrushchev from 1955 to 1964 and during the period of "perestroika" under Mikhail Gorbachev--Ukrainian communists pursued nationalist objectives. The 1986 explosion at the Chornobyl (Chernobyl in Russian) nuclear power plant, located in the Ukrainian SSR, and the Soviet Government's initial efforts to conceal the extent of the catastrophe from its own people and the world, was a watershed for many Ukrainians in exposing the severe problems of the Soviet system. Ukraine became an independent state on August 24, 1991, and was a co-founder of the Commonwealth of Independent States (CIS) following the dissolution of the Soviet Union, although it has not officially joined the organization.

The information here was taken from US Department of State in April 24, 2011.

Turn of the 9th century - formation of Kyivan Rus, a large and powerful medieval state unifying eastern Slavs from the Baltic to the Black Sea, from the Volga to the Tysa Rivers.

the 1130s - the Princes (rulers) engage in internecine struggles; fragmentation and decline of Kyivan Rus

1569 - the Union of Lublin. Agreement between the Grand Duchy of Lithuania and the Kingdom of Poland which gave Poland control over a large part of Ukraine

1553 - 1554. - founding of the Zaporozhian Sich, a socio-political and military-administrative organization of the Ukrainian Cossacks

1648 - 1654 - battles for liberation from Poland led by Bohdan Khmelnytsky

1709 - the Battle of Poltava. Hetman Ivan Mazepa with the aid of Swedish Charles XII attempted to break Ukraine away from Russia. Russia's Peter I emerged victorious

1775 - the Zaporozhian Sich was razed by Russian troops

March, 1917 - the Central Rada (Council) was established as a representative body of the Ukrainian people.

January 22, 1918 - proclamation of a free and independent Ukrainian National Republic, with no ties to the Bolsheviks

January 29, 1918 - Battle of Kruty - a fierce battle between Bolsheviks and Ukrainians in which a unit of approximately 300 schoolboys was surrounded and massacred.

1922 - formation of the Union of Soviet Socialist Republics; Ukraine became a part of the USSR

1932 - 1933 - the Great Famine. Stalin's grain procurement quotas for Ukraine resulted in what can only be described as a man-made famine. Grain was confiscated from peasants; laws were enacted that anyone caught taking grain from a field was to be executed. Millions starved

1945 - Ukraine became a charter member of the United Nations

December 1,1991 - Referendum in Ukraine confirmed the Act Proclaiming Independence of Ukraine. 92% or the electorate voted for Leonid Kravchuk as first President of Ukraine

July 14, 1992 - Ukraine signed the "Agreement On Partnership and Cooperation Between Ukraine and the European Community and its Member States" in Luxembourg. The agreement was ratified by the Supreme Rada of Ukraine November 17, 1994

November 17, 1995 - Ukraine became a member of the European Union

July 9, 1997 - Ukraine signed the "Charter on a Distinctive Partner-ship between NATO and Ukraine"

For a more extensive timeline check out Ukraine.UAZone.net.