History 200B: Family, Gender, and Law

This page defines news, lists the main forms of published news, and describes how to find published news in the library, with emphasis on Anglo-American news. News sources of other regions, which are less well represented in the Library's digital collections, are listed on the pages devoted to those regions in the section on Digital Collections.

News in the Library

News magazines (see page on Periodicals) can of course be news sources, but the lags between event and report, report and publication, and publication and consumption are generally longer than the lag times in newspapers or news broadcasts. News magazines tend to publish more highly synthesized, in-depth articles about the news; notable exceptions, however, include include investigative reports, sometimes called exposés. An exposé is an interesting category of news in that it not only reports news, but often itself becomes news--think, for example, of the Pentagon Papers. Investigative journalists in the United States are widely credited with compelling Congress to the pass the Pure Food and Drug Act of 1906.

Libraries collect news in a materially fixed form, which means newspapers, but broadcast news recordings and newsreels have also been collected. Not all recorded news is published--letters, for example, were a common method of recording and communicating news, but are considered an unpublished source. 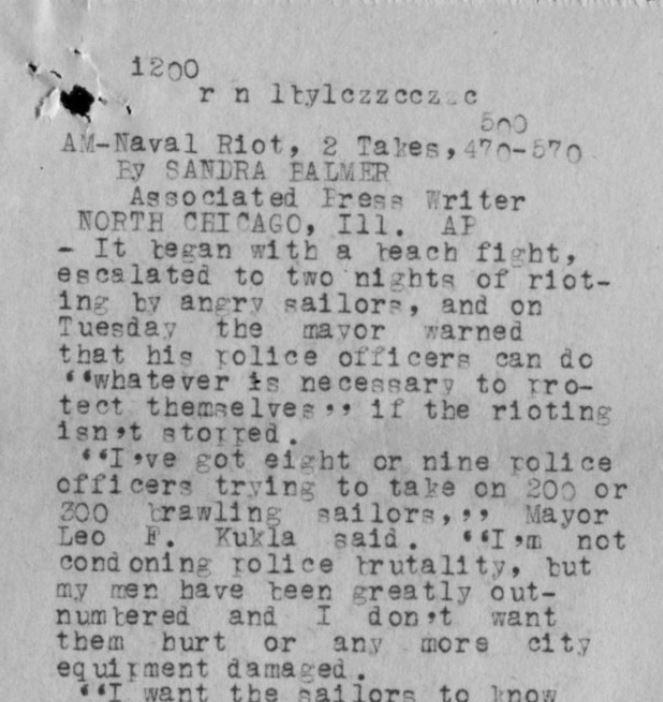 The dispatches of news agencies are now becoming available as the archives of those agencies are digitized. These organizations existed to expedite the collecting and distribution of news. News sharing goes back to the earliest newspapers, but news agencies did not become common until the mid-nineteenth century, when technological advances (especially the invention of the telegraph and construction of vast telegraphic networks across the world) made it possible to share news across long distances more rapidly than ever before. Famous news agencies include the Associated Press, United Press International, Reuters, Wolff Telegraph Bureau (Germany), Havas (France), and Agence France-Presse (France). Some of these agencies were cooperative, in the sense that member newspapers shared news with each other through the agency; others were top-down businesses that were susceptible to government manipulation. For an excellent discussion of how news agencies shaped the news, and why it matters for historians who want to use newspapers as primary sources, see the chapter on "News-Collecting and News-Distributing Organizations" in Lucy Maynard Salmon's The Newspaper and the Historian. To the right is a detail from an Associate Press dispatch. Note that this is the form in which member agencies would receive this news story (over the telegraph). Member agencies often had considerable freedom to shorten the stories so as to fit space limitations or even editorial prerogatives. Bear in mind also that these dispatches are not presented in the form that actual readers would encounter them: when printed in an actual newspaper, this news acquired context that undoubtedly shaped each reader's perception of the news's meaning. For example, is the news story placed on the front page under a banner headline, or buried deep inside the newspaper? Was it juxtaposed with other news that might alter the reader's interpretation of this particular news story? News agency dispatches are therefore excellent sources of news, but not excellent sources of news as actually experienced by readers.

Obviously, digitization of newspapers has drastically improved matters for researchers, though even digitized newspapers present challenges that you will probably not encounter with digitized journals and magazines.

3. The concept of news. The most common mistake we see students make when working with historical newspapers is applying a C21 idea about "news" to older newspapers. Prior to the 1830s, "news" was commercial and political intelligence, and remember that the latter category would be political intelligence for those who held the franchise--nothing at all like political news today.1 News of foreign affairs has been a staple of newspapers since their very beginning.

4. Vocabulary. When searching digitized newspapers, you must use the vocabulary of the time period you are researching, not the vocabulary that we use today. For example, prior to the 1960s especially, many Americans would likely not have conceptualized their country's foreign policy as Imperialism, and using keyword terms like "empire" and "imperialism" would only retrieve articles written by the few who actually did.

5. Article indexing. Unlike periodicals and journals (see introduction to "Article Indexes" on the "Periodicals" page), few newspapers were ever indexed. Before newspaper digitization, the main way to find newspaper articles was to sit at a microfilm machine, and browse through issue after issue of newspapers. If you were researching a specific event, and had a date and place associated with that event, then your work would be a little easier.

The few newspapers that were indexed (e.g. the New York Times) were among the very first to be digitized, so with very few exceptions, you will not be using indexes to identify articles from newspapers.