History 498B: The US in the Bad Neighbor Era

The research tools, databases, collections of sources, and suggestions on this research guide will help you find both primary and secondary sources.

What are Secondary Sources?

Secondary sources are the published work of scholars specializing in the topic. Secondary sources include scholarly books, articles, and essays (both analyses by contemporary scholars as well as older analyses), surveys, criticism, comparative studies, reference sources, and works on theory and methodology; this is also termed the secondary literature. Eventually you will need to decide which interpretation makes the most sense to you and seems consistent with your primary sources, or if you wish to offer a new interpretation.

When we talk about secondary sources, most of the time we are referring to published scholarship on a subject, rather than supplemental material (bibliographies, encyclopedias, handbooks, etc.). Secondary literature is published in both book form and as articles in periodicals, either in print or digital format. (Digital format includes both reproduction of print material online and original e-text.) This scholarship is analytical and interpretive. It may synthesize the work of other historians to present a totally new interpretation. More likely, it offers a new reading of previously analyzed sources or presents an analysis of previously unknown sources.

Hence, you use secondary sources to identify the main currents of thought on your topic. Which historians have taken up this topic and what were their main arguments? How has our understanding of the subject changed with shifts in the predominant methodologies and theoretical perspectives in the historical profession? 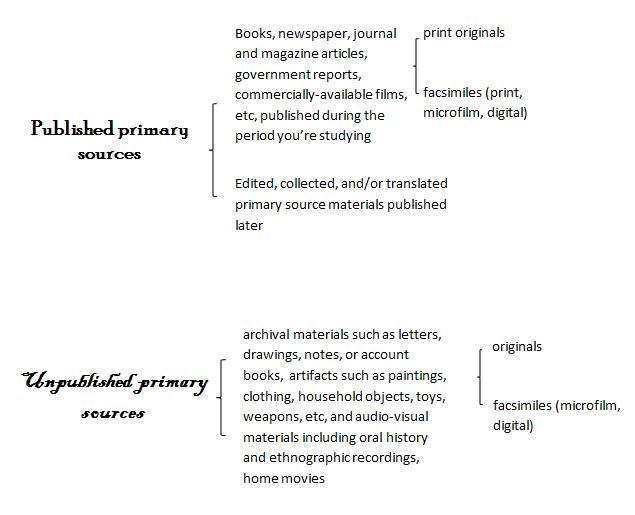 There are many ways to find digitized primary sources, both published and unpublished, starting with our Digital Collections guide:

You can find unpublished primary sources held by archives and museums using ArchiveGrid (an inventory of archival finding aids), or using the "archival material" format in WorldCat. Microfilm facsimiles of primary source materials are also included in WorldCat and other library catalogs: