Newspapers and Magazines as Primary Sources

A tutorial on using newspapers and magazines as primary sources for historical research. Emphasis is on analysis and interpretation of these sources, not on finding them.

When working with newspapers and magazines, you will likely begin with an article, especially if you are using digitized newspaper and magazine collections, article indexes, or footnote tracking as strategies for discovering primary sources.

All newspaper and magazine articles have authors, but the authors are not always identified. Many articles are unsigned, by which we mean the author remains anonymous. The part of a newspaper article that identifies the author or authors is called the byline, which you can see in the example below. In a newspaper article, the byline will sometimes include the author's affiliation (does he or she work for the newspaper itself, or is he or she a reporter for a newswire service like the Associated Press?) and sometimes even the author's job title (e.g. Crime Reporter). If there is a byline, it can appear in different places--beneath the headline, or sometimes at the end of the article itself.

There is no special name for the part of a magazine article that identifies its author, but as with newspapers, many magazine articles are unsigned. If the article is signed, the author's name can appear beneath the title, or at the end of the article. Unsigned articles have been conventional throughout the history of journalism, though less so after the 19th century. In Britain, the number of unsigned magazine articles written by now-famous authors was so great, that scholars in the 20th century tried to provide attribution for as many of these unsigned articles as possible. The results of their work can be consulted in the Wellesley Index to Victorian Periodicals.

Magazine articles often have titles, but not always. Sometimes, especially if the article forms part of a special section, it will be untitled.

Newspaper articles technically do not have titles, but headlines. Headlines and titles serve similar functions, but a headline is really one or more line of display type intended to capture the reader's attention. One reason to understand that headlines are not the same as titles is that a newspaper article reprinted from a newswire service like the Associated Press will often have completely different headlines, depending on the newspaper in which it is printed. The headline chosen for such an article can sometimes reveal information about the newspaper's editorial stance.

Finally, a newspaper article will often have a dateline. An article's dateline is the part of the article that identifies the location from which the reporter filed the article. It can also refer to the date the article was filed with the newspaper, but the word primarily refers to the location. Not every article will carry a dateline, but if it does, you can use that information to decide how near the author was to the event he or she is reporting. For example, in the newspaper article below, we might interpret the reporter's information differently if the article carried a London or New York dateline.

Example of a Newspaper Article 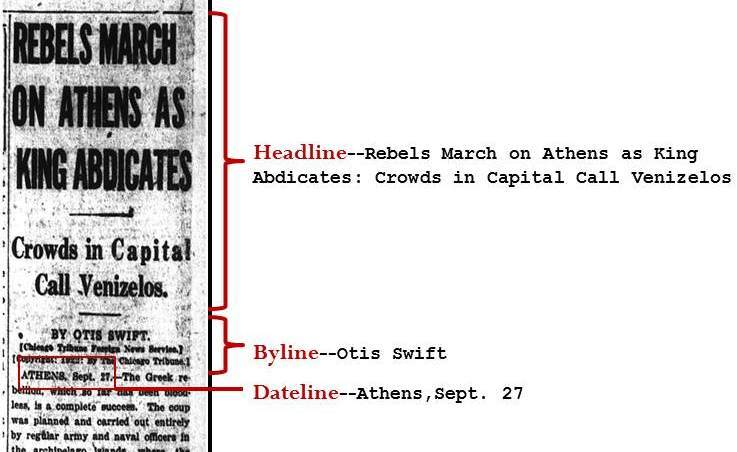 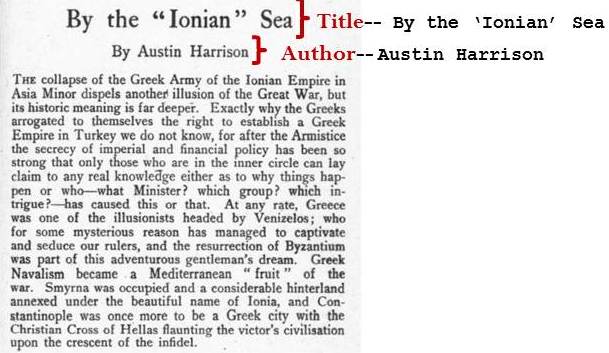 For the first part of this tutorial, you will examine two articles from one of the two groups below.

For a brief overview of the Great Migration, see the article "Great Migration" in Africana: The Encyclopedia of the African and African American Experience, Second Edition.

Group B (Jack the Ripper)

Questions to Answer About Your Article