Newspapers and Magazines as Primary Sources

A tutorial on using newspapers and magazines as primary sources for historical research. Emphasis is on analysis and interpretation of these sources, not on finding them.

What are Newspapers and Magazines?

Newspapers and magazines are print publications issued at regular intervals over time. Historically, newspapers were usually issued daily or weekly, but sometimes semi-weekly (twice a week), bi-weekly (every two weeks), or monthly. Magazines, in contrast, were usually issued weekly, bi-weekly, monthly, or quarterly (four times a year). Both newspapers and magazines could be purchased by subscription (an arrangement whereby the reader pays in advance for a year of issues), or individually, often at news-stands, grocery stores, book stores, train stations, and other places.

In general, the purpose of a newspaper is to convey, as efficiently as possible, current information, or "news", to a particular audience. What constitutes "news" depends in part on the intended audience. Newspapers aimed at a general audience will carry news about politics, crime, wars, economics--just about anything that could interest a general reader. A farm newspaper, on the other hand, might carry news about developments in farming techniques, information about the progress of farm-related legislation through Congress, crop prices, information about county and state fairs, and so forth.

A magazine or periodical will, in general, be written in a more elevated prose style, and will usually offer more in-depth coverage of news, if it carries news at all. If a newspaper attempts to inform, a magazine in contrast attempts to enlighten and entertain.

Magazines and periodicals usually have covers, often bearing an illustration or photograph. A newspaper, in contrast, typically does not have a cover, but a nameplate running across the top of its front page, the rest of the page being filled with news-stories. Magazines are more likely than newspapers to have detailed tables of contents, whereas newspapers, if they include any table of contents at all, will simply identify the the principal sections (ie. national news, local news, sports, society news, classifieds, business news, etc.).

Towards the end of the nineteenth century, magazines and newspapers could increasingly be distinguished by the kind of paper they were printed on. Newspapers were printed on cheap paper, "newsprint", that tended to degrade fairly quickly. Many newspapers are now so brittle that they crumble to pieces when touched. By the twentieth century, magazines were increasingly printed on clay coated paper. Clay coated paper has been treated with a chemical application that gives the paper a glossier appearance, and which also makes them slightly more durable than newspapers. Clay coated paper is preferred over newsprint for printing photographs and other types of illustrations, especially color illustrations.

Broadsheet
A large format newspaper, as opposed to a tabloid (q.v.), in contrast to which it is sometimes deemed more respectable and serious. Originally broadsheets were large, unfolded newspapers printed on a single side, though ballads and other kinds of printed material were also issued this way. Sometimes called broadside. Example of a broadsheet: 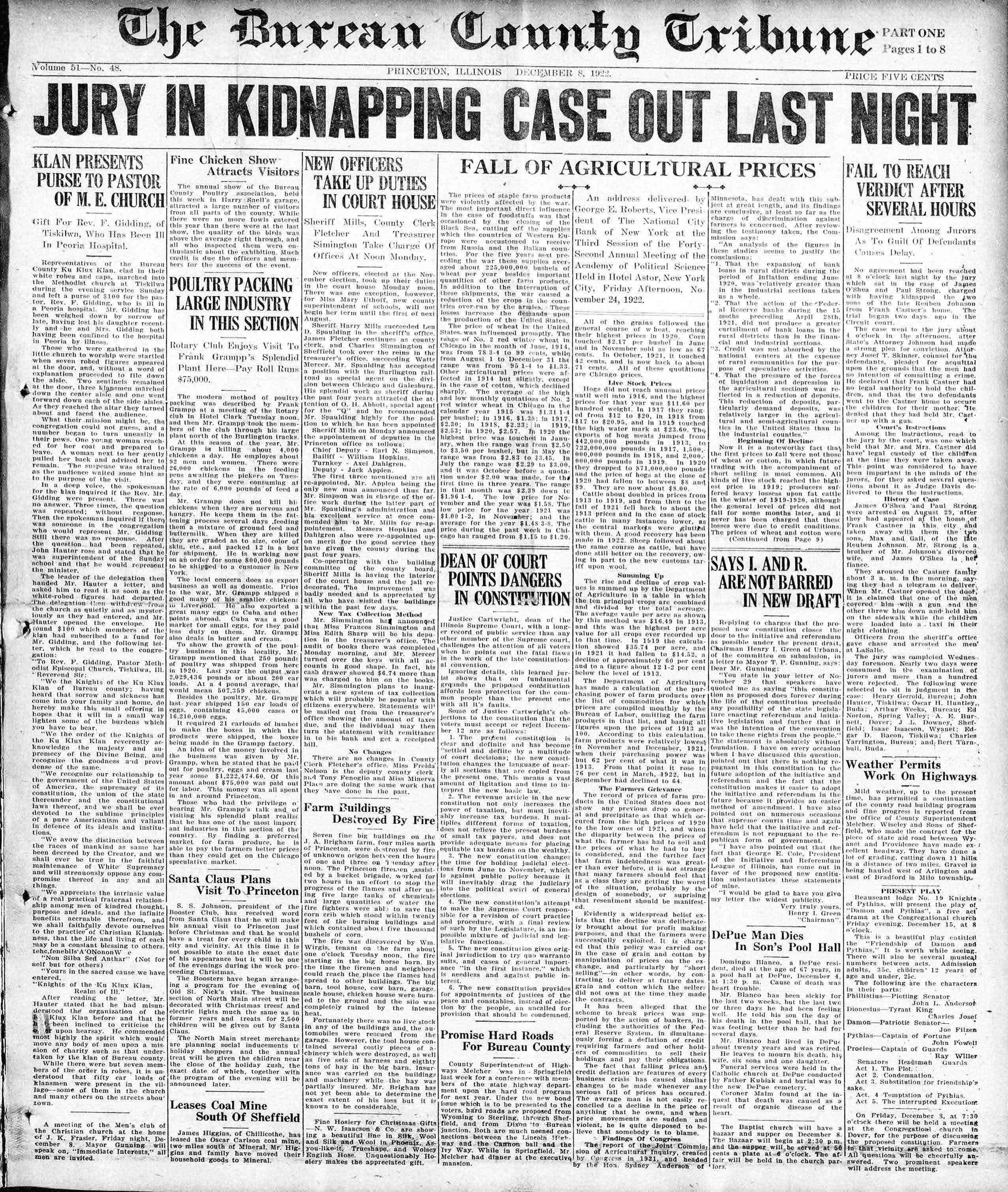 Read more about broadsheets in Key Concepts in Journalism Studies.
Byline
Part of an article that identifies the author. For a discussion of signature versus anonymity in newspapers, see Salmon, pp.65-74.
Caption
Descriptive text beneath a photograph, illustration, or other graphical material. Sometimes called a cutline.
Caption Title
Publication title given atop the first full page of text. More typical of magazines.
Dateline
Part of a news article that identifies the date-when and location-from-which the story was filed.
Deck
A headline is divided into decks. Decks are hierarchical, so that the first deck introduces the main point of the article, and subordinate decks introduce subordinate information. Decks are distinguished typographically, through alignment, horizontal rules, boxes, font family, font size, font case, white space, leading, or any combination of these. As Sutton has written, the deck structure should "carry the reader down into the story" (306).
Edition
Newspapers are sometimes published in different editions. An edition can be distinguished by the time of day it is issued (e.g. morning edition, afternoon edition, evening edition, final edition), by the special nature of its content (e.g. extra edition, inauguration edition), or by the location of its intended audience (e.g. metro edition, suburban edition, state edition). Variant editions can pose problems to the researcher trying to track down a specific citation. Digitized newspaper collections often include only one edition. Microfilmed collections are more likely to include multiple editions.
Editorial Page
Portion of the newspaper that publishes opinion (including editorials, op-ed pieces, syndicated columns, readers' letters, and cartoons), as opposed to the news pages, which are supposed to contain objective, fact-based reporting. Editorials, also called leaders, are usually unsigned articles that reflect the opinion of the newspaper's editorial board. Op-ed pieces, on the other hand, are signed opinion pieces. The editorial page is sometimes labeled as such, but more often is recognizable by the content it carries. The masthead (q.v.) is often printed on the editorial page. Sometimes called the op-ed page, though some consider the op-ed page to be completely separate ("op ed" is an abbreviation for "opposite the editorial page").
Features
Newspaper articles that are not strictly news or opinion. Examples are profiles of important people, cooking tips, consumer advice, career strategies, or health information.
Headline
Informally, the title of an article. Technically the headline is a line of display type that is set above the article, and that summarizes that article, or otherwise attempts to capture a reader's attention. Headlines are sometimes divided into different decks. Decks are different levels of a headline, distinguished by the size of display type used. A second deck is something like a subtitle in a journal article.
Investigative Journalism
Also known as stunt journalism. A key development in British Victorian-era reporting, it took the form of exposés or investigations into various social institutions. One of the most famous late 19th-century examples was William T. Stead's controversial series on child prostitution for the Pall Mall Gazette (1885). Read more about investigative journalism in Key Concepts in Journalism Studies.
Leader
A type of editorial article that occupies a fixed position in the newspaper, generally with the masthead (q.v.). These articles are meant to convey the paper's viewpoint and political allegiances, and also to shape the reader's opinion on an issue or event. Leaders were written both by editorial boards and prominent journalists.
Masthead
Publication information including ownership, publisher, editors, office address, frequency of publication, subscription rates, and more. Location varies, but is often found on the back of page 1, near the editorial page, or on the table of contents page in magazines. The term masthead is sometimes used to denote the cover title, or nameplate (q.v.).
Nameplate
Newspaper's title and logo, printed on the front page. Sometimes called masthead, flag, title-line, or titlepiece.
Pull Quote
A brief excerpt from an article, set in display type, usually beside a column of text, for the purpose of drawing the reader's attention to some interesting aspect of the article. Pull quotes are more typically found in magazines, but became increasingly common in late twentieth century newspapers design.
Running Title
Title of the newspaper or magazine that appears atop each page, often in a shortened form, along with date and page number. Also called the folio.
Tabloid
Technically designates a newspaper format, half the size of the traditional broadsheet (q.v.). Tabloids are sometimes considered more downmarket than broadsheets, often wrongly associated with sensational, low-brow journalism. Moen argues that tabloids were designed for easier reading, especially in places like trains and buses. In Chicago, the Sun-Times was published in tabloid-format, while the Tribune was a broadsheet.  The first tabloid in the United States was the New York Daily News (1919), and in Britain the Daily Mail (1896). Read more about tabloids in Key Concepts in Journalism Studies.
Union Logotype
The printing or typographical union's label or seal, usually printed on the masthead (q.v.), if included at all. According to Harnett, its appearance could indicate an appeal to working class readers, by showing the paper was manufactured with union labor. Sometimes referred to as the bug.

Sutton, Albert A. Design and Makeup of the Newspaper. New York: Prentice-Hall, 1948. Includes useful, if brief, essays on historical developments in newspaper design. See, for example, chapter 11 on the headline.