The Sarum Rite, also known as the Use of Salisbury, developed in the Roman Catholic Church during the period 1066-1558 and was prominently used throughout Northwestern Europe and the larger part of Great Britain. The Rite determined the ordering of Christian communal worship, setting the sequence for rituals within the Mass and the Breviary. 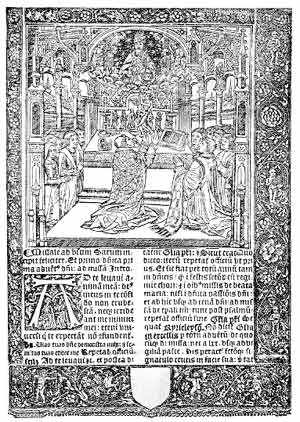 A 15th/16th-century woodcut from a Sarum missal showing a pre-Reformation altar.

Originally a tradition local to the Diocese of Salisbury, the Sarum Rite spread through much of southern England, and eventually, to Ireland, Scotland, and Wales, and was prevalent until the reign of Queen Mary I. Largely abandoned after the Reformation, it nevertheless exerted considerable influence on the Anglican liturgy, as manifested in the early iterations of the Book of Common Prayer. Many of the rite's ornaments and ceremonial practices were revived in the ritual of the Anglican communion in the late 19th and early 20th century, and it has also been used in the Eastern Orthodox Church.

The Sarum Rite website serves to exhibit a portion of the Gregorian Institute of Canada's ongoing efforts to publish the full text and music of the Sarum Breviary, Processional, and Missal, in both Latin and English. These fascinating medieval manuscripts provide historical documentation of interest to students of both medieval hymnology and its evolution up to the present day.

A comprehensive index of hymns and hymnals that allows you to search by tune name; text name; names of people; hymnal title or ID number; topic such as liturgical use of text lectionary week; the scripture referenced by the tune text; incipit; meter; denomination; and many more.You can also browse by "instance," that is, by the particular combination of a text and tune as published in a particular hymnal (Presbyterian Hymnal #139, for example, is an instance made up of the text "Come, Thou Almighty King" and the tune ITALIAN HYMN).

Another outstanding feature of the site is that, since 2009, it has been the host of the Dictionary of North American Hymnology,a project begun in the 1950s by the Hymn Society in United States and Canada, aiming to index all hymnals printed in North America to 1978. The DNAH indexes almost 5,000 hymnals and over 1 million hymn instances, making it something like the 'Julian' (i.e. John Julian's seminal A Dictionary of Hymnology: Setting forth the Origin and History of Christian Hymns of all Ages and Nations; Vol. 1 and 2) resource for North America.

With options for account creation to save your research and citations, printing of music and lyrics, and even a linked web-store of hymn-related products (!), Hymnary.org is a full-service resource for all the things hymnological.

A site dedicated to providing accurate information on both historical and current practice of the Latin rite of the Catholic Church. At present, this includes the missal of 1972 (Novus Ordo) and the missal of 1960 (Tridentine).

Includes over 10,000 hymns, along with author and composer biographies; histories of hymns and gospel songs; lyrics, scores; and MIDI files.