If you need to research on migrant, immigrant and/or refugee populations, we can help!

Feel free to peruse our blog for interesting stories related to our International and Area Studies Library. Also see the intial announcement of our event in The Daily Illini.

The Chai Wai Series Launches with “Migrants, Immigrants and Refugees” 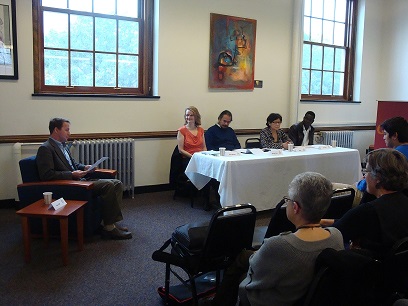 “What does it take for someone to leave what they’ve worked for their whole life?” he asked. In one of the more provocative statements made at the International and Area Studies Library’s (IASL) first Chai Wai event, Ricardo Díaz of the C-U Immigration Forum boldly affirmed that “Mexicans don’t want to come to the USA,” openly challenging a common premonition existing about the U.S. being an immigrant’s ‘paradise.’ “Immigration is a natural human process,” Díaz said, adding that “It’s not just liberty” that attracts people from other countries to seek lives within the U.S. borders: “it’s the economic opportunity”. Díaz passionately suggested that many people of both working and professional class love their home countries but make deliberate choices of sacrifice in order provide secure futures for their families. They were statements like these that constructed the framework in which push and pull factors regarding immigration were visited Tuesday of last week.

As South Asian Studies Librarian Mara Thacker’s brainchild, the Chai Wai Series was launched to much acclaim. This series seeks to provide a forum for conversations regarding global issues that need space for development, debate and discussion. More than forty people gathered in the Main Library’s room 321 to hear four panelists speak on the topic of “migrants, immigrants and refugees.” Three panelists in addition to Díaz, University of Illinois anthropology professor Ellen Moodie, Ha Ho of the East Central Illinois Refugee Mutual Assistance Center (ECIRMAC) and Gai Nyok, a current master student in economics and former refugee, shared their personal narratives, highlights of their research and general postures that encouraged, as Moodie phrased it, “compassionate policy in a country that can absorb immigrants.” 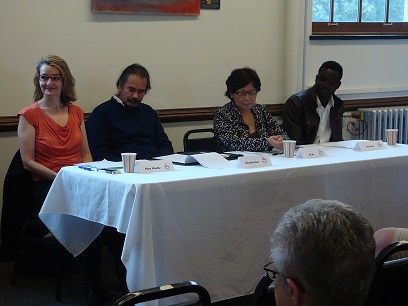 One valuable feature of the event was the diversity of voices and experience represented by the panel. Too often issues of immigration are reduced to discussions of U.S.-Mexico relations. This panel, by its very nature, infused identities that spring from war-torn areas like the Sudans, persecuted minorities like the Hmong of Vietnam and Central American narratives of post-war reformation. In addition to the varied faces on the panel, some insights were particularly compelling. Moodie, for example, affirmed that “violence actually increased” following armed conflicts as countries entered into new instabilities and reconstruction. The post-war period, then, while largely interpreted as one of peace, may in fact see more human mobility than when fighting is active. Moreover, some internally displaced people choose not to seek refuge in places like the U.S. even when a protected status is available to them. When asked if his mother could join him in the United States, Nyok, a former Lost Boy of Sudan who found a second family in a foster home in Virginia, affirmed that yes, she could. However, he supposed that her experience in the West might indeed be of an inferior quality than that which she is experiencing in East Africa, citing the language barriers she would encounter, the cultural isolation, the laborious work she would take on, and the lack of respect and promotion she could likely experience in trying to integrate into a foreign society and its job workforce at an advanced age.

Despite all of this, Ho, speaking from experience, affirmed with great confidence that “the United States is a very generous country.” As someone whose immigrant status has seen a variety of classifications—visitor, resident and citizen—Ho acknowledges that “immigration law is very complex,” yet also that the U.S. offers a wealth of possibilities for mobile persons. The discussion implied that there are significant varieties of meaning indeed between migrants, immigrants, refugees, asylum-seekers, internally displaced people, exiles and even expatriates, and that the variety of their experiences merit the richness of the vocabulary used to describe them. While the opportunities are numerous once a migrant obtains a certain status, before then, immigration policy can appear hostile. “I don’t expect the system to change without a struggle,” Díaz concluded, and for that reason, Díaz lives out his passion and encourages others towards advocacy. He is currently promoting José Toledo’s documentary “Unfreedom: Latino Immigrants in a Midwestern Town.”

For more on the Chai Wai Series, follow the International and Area Studies Library on Facebook, access our lib guide which addresses our first event and be sure to join us Wednesday, November 5, 2014 from 2:00-3:30pm when we will discuss gender-based violence in the global South. 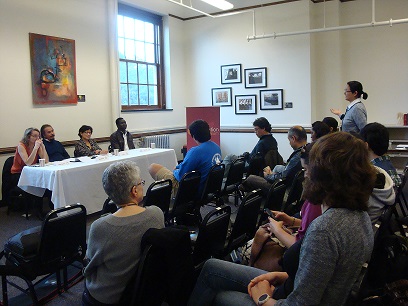